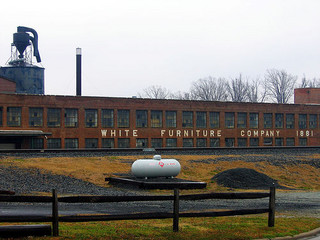 In addition to manufacturing window materials, the White brothers contracted for building jobs. The mass production of building materials eventually led to the standardization of architectural forms throughout the state. The White Furniture Company's success in this lucrative industry led to the production of fine furniture in 1896. Specializing in furnishings for bedrooms and dining rooms, the company continued to prosper. Always on the cutting edge of technology, White Furniture became one of the first plants in the South to utilize electrically powered machinery. In 1905 the company became the first southern furniture manufacturer to be awarded a contract with the U.S. government, supplying furniture to military personnel working on the Panama Canal. Eventually the company supplied solid mahogany furniture for the quarters of army officers throughout the United States and the Far East. In 1912 White Furniture provided the furnishings for Asheville's famed Grove Park Inn, many of which are still in use.

During the Jamestown Exposition of 1907, White Furniture received an award as the top manufacturer of furniture in the country and a blue ribbon for best furniture display. Eventually the company became known for its elegant mahogany dining room furnishings. The pieces produced by White Furniture featured classical designs with attention given to details, such as the selection of fine, kiln-dried woods. Carefully crafted inlays became the company's trademark.

In 1940 White Furniture expanded its business and opened a factory in Hillsborough. During World War II, the company again received government contracts. In 1982, the factory building itself was placed on the National Register of Historic Places. In 1985 the Hickory White Furniture Company, which had no connection to the Mebane firm, purchased White Furniture, ending family ownership after 104 years. Subsequently, in 1993, Hickory White downsized its operation, closing the Mebane plant and consolidating all of its activities in Hickory.

Bill Bamberger and Cathy N. Davidson, Closing: The Life and Death of an American Factory (1998).

The White Furniture Company of Mebane: The Final Months. http://muse.jhu.edu/login