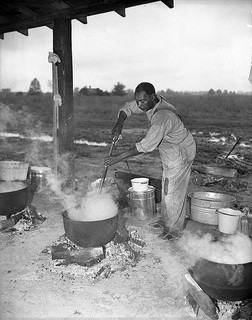 Fish stews are more than eastern North Carolina folk meals; like their cousin the pig pickin', they are highly ritualized and symbolic social events representing a celebration of the cornucopia of a region, a love for Arcadian values and pleasures, and a reverence for democratic ideals. Prepared for a crowd of people-often family members and neighbors who gather and enjoy one another's company while the cooking is underway and during and after the meal-fish stews are festive but informal, "low-down" evening occasions, and the long-standing ritual associated with them reflects the dogged unpretentiousness of a people who value reality over appearances. Thought to have originated with the early English settlers of North Carolina's Coastal Plain, fish stews are often prepared and served by rustic people on weekends, holidays, birthdays, and other special occasions in the fall and winter. Revelry, including music, singing, and the drinking of whiskey and beer, customarily accompanies the preparation and serving of stews, even when the meal is hosted by temperance-minded Baptists or Methodists.

Classic fish stews are cooked outdoors under the stars in cast-iron pots suspended from elevated logs or tripods. Typical sites are in backyards and by lean-tos on the sides of barns, but a gala event is sometimes celebrated away from home in a clearing near the edge of a forest or on a riverbank. Heat for cooking comes from a wood fire, or from its modern equivalent, a portable gas burner. While nibbling on snacks and sipping liquid refreshments, cooks and guests are warmed by the burning wood and lighted by its bright flames. Boards held up by sawhorses or chicken wire stretched across wooden frames often function as tables, while tobacco carts, upside-down buckets, and pick-up tailgates can serve as seats.

Perhaps more than any other eastern North Carolina folk custom, the serving protocol for fish stews best reflects the state's motto Esse Quam Videri (to be rather than to seem). For example, it is considered a breach of etiquette to ladle the savory stew into fine porcelain bowls; propriety calls for paper bowls, especially those used by butchers to package ground and sliced meats in markets. In a similar vein, it is thought unseemly to use sterling eating utensils; plastic spoons are preferred, although military surplus utensils are acceptable. Elaborate side dishes and condiments are regarded as incorrect and superfluous; instead, fresh, store-bought white bread is held as the perfect accompaniment to the stew, while cornbread and soda crackers are acceptable seconds. Pepsi-Cola, the soft drink of choice because it originated in eastern North Carolina, is served in paper cups, as is the whiskey enjoyed before, during, and after the dinner. It is also proper that beer be drunk directly from the bottle or can.

In many North Carolina counties, custom dictates that the steaming fish stew and its accompanying bread and beverages be the sole entrées for the meal. Accordingly, numerous servings of the main course are usual. To serve anything else would be to mar the delight of the dish and defile the sanctity of the ritual that surrounds it.

Fish stews are known to have health-inducing properties, improving circulation and reviving sagging spirits, especially when enjoyed with liquor made from Tidewater corn. Moreover, the broth, when taken in sufficient quantity, has wide repute as a reliable purgative.

Karen Baldwin, Folk Arts and Folklife in and around Pitt County: A Handbook and Resource Guide (1990).