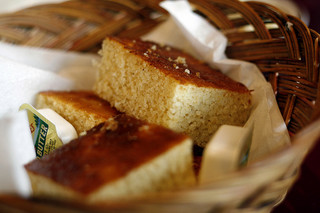 Breads of various types have been essential elements of the foodways of North Carolinians since long before European settlement. Corn was the base ingredient for North Carolina's earliest Indian breads. Many centuries ago, American Indians in the region made cornbread by frying it in bear fat or boiling it into a type of dumpling. In another method, a small loaf or a round "pone" was put in the bottom of a large pot. A smaller pot was then placed upside-down over it and covered with hot coals. Early Indian ways of making cornbread were later adapted by European settlers and became the basis of an important part of traditional southern cooking.

"Indian corn" quickly became the staple crop of the early European settlers in North Carolina. Corn was easier to grow than wheat in most of North Carolina and the southern region, and the crude early gristmills did a better job of grinding corn than wheat. Cornbread was also easier to make than wheat bread, as it did not require the use of yeast and long waits for the dough to rise. Its main disadvantage was that it did not keep well, which seems to be the beginning of the southern preference for hot bread at meals. Cooks could add milk, eggs, shortening, or even wheat flour to increase the variety of cornbreads. White cornmeal was the traditional favorite in North Carolina and throughout the South.

There were several traditional forms of cornbread, most of which are still popular in North Carolina. Ashcakes were baked in the hot coals of a fireplace. The burnt outside of the cake was scraped off before eating. Hoecakes were originally baked on the blade of a hoe, although later the name was applied to other kinds of cornbread. Johnnycake differed from other forms of cornbread in that it was cooked on a plank before an open fire to provide sustenance for travelers over extended paths and trails. It was also cooked indoors, especially at the hearths of Piedmont and Mountain cabins. The name reflects the frontier pronunciation of "journey-cake," the chief early American trail food. 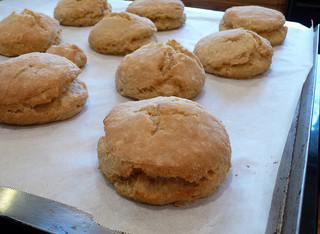 Corn pone, based on the Indian way of making cornbread, was a simple loaf of cornbread usually made without eggs or milk. Cracklin' bread was made with the crisp "cracklins" left over from rendering pork lard added to the batter. Hush puppies were small deep-fried balls of cornmeal batter, often flavored with onions. The name allegedly came from the practice of cooks tossing the tasty bits of fried corn dough to dogs to keep them quiet. Finally, spoon bread was a soft bread made with cornmeal, eggs, milk, and shortening; it is served with a spoon.

Wheat was grown in North Carolina as early as the seventeenth century. John Lawson wrote of seeing fine crops of wheat in the colony. He was surprised on one occasion when, at the home of some Waxhaw Indians, he was served "white-bread as any English would have done." Antebellum North Carolina grew more wheat than most of the other southern states, although its production was dwarfed by the output of the midwestern states. Wheat flour was more expensive than cornmeal, and the state's slaves and poor farmers rarely had any bread but cornbread. Even the richest North Carolinians (and southerners in general), though, never seemed to grow tired of cornbread, and many families had various kinds of corn or wheat bread at the same meal.

Most early North Carolina families had to do their baking with their fireplace and a Dutch oven, but wealthier families might have a brick oven built into or next to the kitchen fireplace chimney. During the middle of the nineteenth century, families began to switch from cooking in the fireplace to using iron stoves. Biscuits became especially popular after the Civil War with the appearance of the woodstove, commercial baking powder, and the availability of cheap white flour from the Midwest. Biscuits were such common dinner table fare in North Carolina that one usually finds few recipes for them in old cookbooks. While there are numerous recipes for breads and muffins, biscuits remained relatively basic. Most housewives prepared them three times a day, not bothering to measure ingredients. When girls stood beside their mothers to study the culinary skills required in a kitchen, biscuit making was one of the first challenges.

While families ate home-baked bread during most of North Carolina's history, commercial bakeries existed as early as the eighteenth century. The Winkler Bakery (1800) was still operating in Old Salem by the early 2000s. Taverns and ordinaries in the colonial era and afterward baked bread to serve guests as well as prisoners in the county jails. In later times, home delivery helped make bakery products popular in towns. Bakeries were aided by new inventions, such as automatic wrapping machines in the 1910s and a practical bread slicer in 1928. After World War I, it became fashionable to have toast instead of biscuits for breakfast.

Commercial breads became more popular as the twentieth century unfolded, although "store-bought" bread was initially considered inferior to home-baked bread. Farm families tended to bake their own bread for years after town households switched to buying commercially baked bread. The increase in the number of women who worked outside the home, rising incomes, and the ease of transporting baked goods by truck on a growing state road system all contributed to the decline in home baking and the rapid growth of the baking industry. This trend was greatly accelerated during World War II, as many more women entered the wartime workplace and had little time for making their own bread. The trend away from home baking continued after the war, as North Carolina consumers enjoyed the convenience and ever-increasing variety of commercial bakery goods.

Joe Gray Taylor, Eating, Drinking, and Visiting in the South: An Informal History (1982).