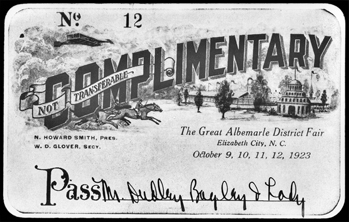 County fairs began in North Carolina nearly 200 years before the first state fair was held in Raleigh in 1853. Early North Carolina counties such as Albemarle, Clarendon, and Craven were authorized by the Great Deed of Grant in 1663 to have fairs for the sale of various "products and commodities." The eighteenth century, both before and after statehood, saw fairs brought to other localities. The General Assembly, in an act of 1750 for "laying out a town" on Samuel Jordan's plantation in Northampton County, provided for establishing two fairs annually. Another act, in 1753, established two fairs annually in a town ordered to be laid out on John Jenkins's land in Anson County. Hillsborough's charter (1770) gave the town power to hold a market each Saturday and two annual fairs at the courthouse on the first Tuesdays in May and November for the sale and vending of "Black Cattle, Provisions, Goods, Wares and Merchandise whatsoever." Fairs were also established at Wilmington and Halifax in 1777 and at Edenton in 1779, and in 1792 the legislature chartered fairs at places such as Laurel Hill (Richmond County), Brown Marsh (Bladen County), and the James Campbell Plantation (Cumberland County).

Carnival attractions such as sideshows and gambling tents were a sideline at these early fairs, while the emphasis remained on trade, barter, and various competitions for blue ribbons, such as best farmers, best livestock, best counterpanes, and best baking and canning products. The complexion of these fairs, however, gradually changed through the years as gambling, drinking, and fighting began to overshadow the socializing and trading that had been the original intent. Legislation affecting the hours and content of fairs followed.

Between 1813 and 1860, several counties established agricultural societies, and some of them, such as the Beaufort County Society in 1824, held fairs. Some fairs were sponsored by women's charitable societies such as the New Bern Female Charitable Society, the Raleigh Female Benevolent Society, and the Fayetteville Female Society of Industry.

In 2006 the North Carolina Association of Agricultural Fairs listed nearly 50 local or county fairs that were held in the state each year, emphasizing agricultural or other themes. These fairs included the Bethware Community Fair in King's Mountain, the Central Carolina Fair in Greensboro, the Cherokee Indian Fair in Cherokee, the North Carolina Mountain State Fair in Fletcher, and fairs in Burke, Caldwell, Chowan, Haywood, Lenoir, Onslow, Stanly, and many other North Carolina counties.