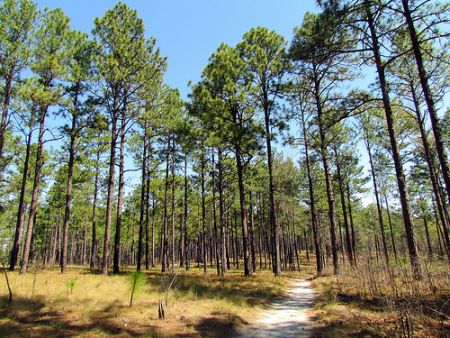 The conservation movement in North Carolina began with methods of maintaining the timber supply and restrictions on wasteful colonial hunting practices. Some eighteenth-century North Carolinians noted the effects of wasteful practices upon wildlife and timber; consequently, North Carolina lawmakers established a closed hunting season on deer in 1738, and in 1768 they restricted deer hunting to owners of large tracts of land. The early exploitative timber harvests in North Carolina began with the domestic need to clear land. The naval stores industry found a center in the abundant longleaf pine forests of eastern North Carolina. After the War of 1812, the state became the center of the turpentine industry. North Carolina was the largest resin gum producer in the South in 1880, producing 6.3 million gallons of turpentine and more than 650,000 barrels of tar. The wasteful turpentine harvest stunted the growth and quality of thousands of square miles of young pines.

Before the late nineteenth century, most North Carolinians had not worried about their impact upon the environment as they remade the landscape to meet their needs. However, the Industrial Revolution introduced the problem of serious pollution to the state. Government officials began to take direct action regarding water pollution, condemning such practices as the mishandling of untreated sewage, the dumping of dead animals in streams and rivers, and the release of sawdust into the water by waterpowered lumber mills. In 1889 the General Assembly began to enact laws to prevent such abuses. In that same year, the legislature prohibited the placement of hazardous waste upstream from the water supply intakes of Mecklenburg County's municipalities and Greensboro. In 1893 the State Board of Health assumed responsibility for the general oversight of inland water. Officials were charged with examining domestic water supplies and consulting with towns, corporations, and institutions.

North Carolina began to intensify efforts to protect water supplies from pollutants during the early twentieth century. In 1903 the General Assembly passed an act to protect watersheds of public water supplies. In 1904 the U.S. Geological Survey issued a report that reviewed all state antipollution laws relating to inland waters and concluded that North Carolina had recognized the importance of and applied general laws for preserving clean water for drinking and domestic use. The General Assembly rewrote public health laws in 1911 to give the State Board of Health more regulatory authority in the disposal of waste, also passing legislation to curb the dumping of mining wastes into two creeks in Burke County. In the 1910s and 1920s, North Carolina made an effort to protect fish with the creation of the Fisheries Commission Board and the Department of Conservation and Development. The State Board of Health also assigned a sanitary engineer to work with the Fisheries Commission. In 1945 the General Assembly created the Stream Sanitation and Conservation Committee to oversee pollution-control work.

In spite of its massive timber harvests, North Carolina developed scientific management of forestry for multiple uses. By the late 1880s, George Washington Vanderbilt had acquired more than 100,000 acres of mountain forest and brought in managers to supervise it. Gifford Pinchot managed Vanderbilt's Biltmore forests with the idea of multiple use, a way of balancing preservation with harvesting. After Pinchot left to head the Forestry Division in the U.S. Department of Agriculture, Carl A. Schenck took over management of the Biltmore forests. Schenck, a German forester, also adhered to the concept of multiple use, and by 1898 he was supervising a forestry school in the Biltmore forests that became highly influential. The school helped establish the concept of professional scientific forestry in the United States.

One of Schenck's coworkers, W. W. Ashe of Raleigh, introduced selective cutting of mature trees and more conservative logging procedures. Ashe also helped secure passage of the Weeks Act (also known as the Appalachian Act), introduced by Senator George Pritchard of North Carolina. The bill, passed in 1911, allowed the federal government to purchase threatened watersheds and timber stands. The Weeks Act led to the National Forest Service's purchase of 5.8 million acres of lands in the South between 1911 and 1933 and the eventual creation of the Great Smoky Mountains National Park.

The wave of conservation that began in the early twentieth century also created concerns over North Carolina's wildlife population. In much of the state, male and female deer could be shot year-round. Quail and wild turkeys had no protection in several counties; shorebirds had little protection; and game wardens were nonexistent. T. Gilbert Pearson of the Audubon Society lobbied for more wildlife protection in North Carolina and influenced a state law in 1903 that protected nongame birds and established hunting seasons and nonresident license fees. Proceeds from the license fees paid the Audubon Society to hire game wardens.

Air pollution in North Carolina began to gradually increase when textile mills switched from waterpower to coal-powered steam engines. In 1880 only 16 percent of the state's cotton mills were steam powered; by 1900 the number had increased to 64 percent. Though the General Assembly had in 1917 permitted municipalities to regulate smoke emissions, amending the law in 1949 to allow for the exception of coal-burning locomotives, years elapsed before harmful air gained greater attention from the government.

By the 1930s concern for the environment focused on farmland. Much of the agricultural lands in the United States had suffered the ravages of overproduction and dependence on soil-exhaustive practices. President Franklin D. Roosevelt's New Deal increased the role of the federal government and scientific managers in conservation concerns. The New Deal created programs and agencies designed to improve the quality of land while also providing Depression-era employment. The Soil Conservation Service, for example, supervised a voluntary plan to pay farmers to plant soil-enriching crops and to take soil-depleting crops, including tobacco, out of production. The Resettlement Administration removed submarginal land from farming through its land-use program. Families were removed from unproductive areas, and the land was adapted for forestation, recreation, and wildlife reserves. North Carolina had five land retirement projects, totaling 152,925 acres.

The Soil Conservation Service, National Forest Service, and National Park Service worked with the majority of the camps of the Civilian Conservation Corps (CCC), a New Deal program that employed young men in conservation projects. From 1933 to 1939, the CCCspent $57.2 million in North Carolina, employing 46,940 workers. Their tree planting and seeding projects covered 18.2 million square yards, and their soil conservation work included 500,000 acres of farmland.

Thomas Clark, The Greening of the South: The Recovery of Land and Forest (rev. ed., 2004).

Albert Cowdrey, This Land, This South: An Environmental History (1983).

Neil R. Sampson, For Love of the Land: A History of the National Association of Conservation Districts (1985).