By Steven A. Hill. Copyright 2018. Published with permission. For personal educational use and not for further distribution.

Donald Hayes Conley was an educational leader in Pitt County, North Carolina. He taught for several years, was a high school principal, and later became Superintendent of Pitt County Schools.  His career there spanned more than 60 years. 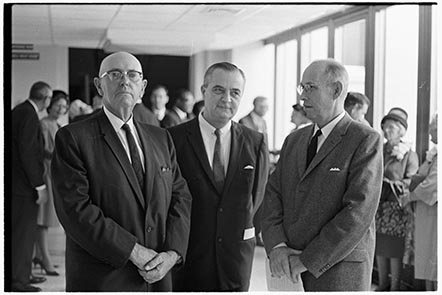 Conley was born on November 2, 1902 in Granite Falls in Caldwell County to parents L. E. and Ada Conley. Reared on the family’s farm near Lenoir, he learned the value of service and education at a young age. Of six children in his family, two brothers served in the military and his three sisters taught school. Conley worked on the family farm while attending high school, and his mother made extra effort to instill a solid educational base in her son. She had not been to high school or college but she taught him Latin and Algebra by lamplight. In an interview in 1987, he recalled that he owed his inspiration and commitment to his mother, father and teachers. Conley graduated from Hudson High School in 1919 and then graduated Cum Laude from Trinity College in Durham (now Duke University) in 1923. He did graduate study at Lenoir Rhyne College.

Conley’s educational career started at Winterville High School in Winterville, North Carolina where he taught math and science and was the principal from 1923 to 1931. In 1932, he became the Superintendent of Pitt County Schools and held that position until 1965. In 1971, Pitt County named its new high school for D.H. Conley. As Superintendent of Pitt County Schools for 33 years, Conley energetically worked to improve Pitt County’s school system, notably consolidating the number of schools operating in the county. After his retirement as Superintendent of the county schools, he was asked by his successor, Arthur S. Alford, to be the county’s Attendance Officer. Conley served in this capacity from 1965 to 1989.

Through most of the twentieth century and during the era of school segregation, educational leaders were influential community leaders whose authority reached beyond school grounds. Conley and other educational officials in Pitt County used their positions to improve the lives of their students and communities, both black and white. During the “war on tuberculosis” in Pitt County in the 1930s, D.H. Conley was one of the directors of the Pitt County Tuberculosis Association.  In 1938 he instituted a regulation that mandated a physical examination for members of the local basketball teams, believing that it was “unwise and unsafe for high school boys and girls to enter competitive athletics without a physical examine.”  During the Great Depression, Conley and his counterpart in the Greenville City Schools system, Superintendent J.H. Rose, endorsed a plan to provide dental work in the schools for underprivileged children of both races, and Pitt County became one of the first counties in the state to recognize the importance of dental work in preventive medicine.

During the Cold War, Conley recognized the role poor education played in opportunities available to students after graduating. In particular, many recent graduates were disqualified for military service because they failed the Army’s mental tests. Conley and J.H. Rose worked together to understand the root of the problem. The county conducted a study that showed that some of the draft rejectees had been absent from school for up to 500 days over a period of 8 or 9 years, and it concluded that students had been rejected from the Army not because of intelligence but rather because of poor reading skills. They, along with other state educators, knew that the state’s compulsory attendance laws needed to be enforced to improve outcomes.

Described as the “prototype of the southern gentleman,” D. H. Conley’s life and career saw many changes in southern society that required responsive, thoughtful, and flexible school leadership.  People who knew and worked alongside him noted that his personal demeanor affected the outcomes of challenges that he faced. He was to the point, honest, and fair. When there were problems, Conley was not afraid to seek advice from those whose opinion he valued. Observers said that Conley displayed a real ability to remain calm when tense situations might have caused others to be angry, and he knew how to listen. And as a leader, Conley was open to suggestions when confronting problems.

During the Jim Crow era, the 1890s to 1960s, educational leaders were also race leaders. As Superintendent of both black and white schools in the county, Conley worked across the racial divide, and he saw his leadership role as an opportunity to “strengthen the mutual bonds of friendship and good will that now exist between the races.”  Conley worked with Dr. Andrew Best, a local African American physician, who had created the North Carolina Joint Council on Health and Citizenship to combat the high incidence of illiteracy, poverty, and other socio-economic problems among African Americans. Best’s leadership was a noteworthy example of partnership between black and white leaders, and both Conley and Rose were present in the 1960 inaugural meeting of his efforts. Conley also worked with another attendee, Dr. Samuel DeWitt Proctor, president of Greensboro’s Agricultural and Technical College (today North Carolina A&T State University). Conley’s work with Best and Procter was a positive sign of changing attitudes about race for the greater good.

In 1936, Conley married Eugenia Powell, a fourth-grade teacher at Winterville High School. They had one son, Donald Edgar Conley.  Conley was 89 at the time of his death on January 24, 1992. He was buried at Pinewood Memorial Park in Greenville, North Carolina and was survived by his wife and son.