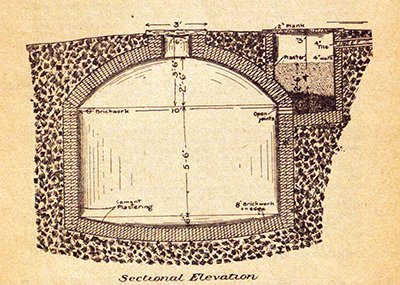 Cisterns, large receptacles built for the storage of water, were used in North Carolina for potables or fire protection in all types of urban and rural buildings prior to the advent of modern plumbing. Unlike a well, a cistern must be deliberately filled with water because it does not connect to a natural underground water source. By the last quarter of the nineteenth century, fire insurance maps for many North Carolina small towns and cities documented the location of public and private cisterns.

Cistern construction probably reached its peak between 1880 and 1900, following advances in biological sciences and the emergence of a new breed of "sanitarians" fighting for social reforms and a healthier standard of living. One of the major health concerns in coastal North Carolina during the last quarter of the nineteenth century was the outbreak and control of malarial fever epidemics. In 1895 Dr. Richard Lewis, then secretary of North Carolina's Board of Health, published a booklet titled Drinking Water in Its Relation to Malarial Diseases, in which he endorsed the use of cisterns instead of shallow wells for drinking water. Testimonials published in the book indicated that cistern use was rising throughout the state, and health improvements were the result.

Two shapes of cisterns have been noted in different geophysical regions of North Carolina. A low-vaulted, rectangular-shaped cistern was constructed in the Coastal Plain (the Ziegler House cisterns in Edenton are of this type), while a dome-topped, conical-shaped cistern was used in the Piedmont and the Mountains (the Thomas Wolfe House cistern in Asheville is of this type). This difference was likely related to soil types and, more important, levels of the natural underground water table. Numerous other extant and archaeological cisterns have been recorded and examined in locations around the state, including the campus of the University of North Carolina at Chapel Hill (in front of New West building), Somerset Place (a plantation house in Washington County), houses in Raleigh's historic Oakwood neighborhood, the Beldon-Horne House in Fayetteville, and houses in Elizabeth City and New Bern. Archaeological excavations have revealed that these underground reservoirs, once fallen into disuse or replaced by modern plumbing, often were converted into garbage receptacles. Excavations of the Thomas Wolfe cistern fill produced more than 15,000 artifacts and interesting insights into the cultural behaviors of the house's former occupants. Cisterns can still be found in some rural homesteads where fire hydrants never existed and where potable water for livestock, gardens, or washing is needed.