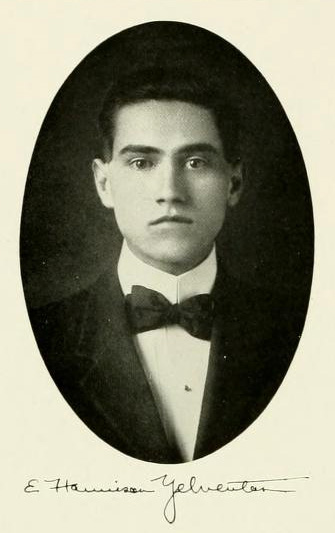 Emmor Harrison Yelverton, diplomat, was born at his father's town house in Goldsboro, Wayne County, the son of William Thomas and Sarah Jane Sauls Yelverton, both natives of Wayne County. His father, a former clerk of the Wayne County Superior Court, was a partner in the hardware firm of Yelverton and Smith, later W. T. Yelverton and Sons. Through his father he was descended from Captain James Blount (fl. 1670), of Mulberry Hill, Chowan County, an influential Carolina planter, member of the Council, and founder of one of the colony's most powerful and prominent families, whose granddaughter, Elizabeth Blount, married John Yelverton sometime before 1706. The Yelvertons moved into what is now Wayne County in the mid-eighteenth century, and a later John Yelverton was commissioned an officer in the Dobbs County Militia in 1761. The family had produced justices of the peace, court officials, and members of the General Assembly.

Harrison Yelverton attended the public schools of Goldsboro and was graduated from the Goldsboro High School in 1908, when, like his four older brothers, he entered The University of North Carolina. There he was a member of the Beta Chapter of Phi Delta Theta social fraternity and was president his senior year. He continued to support this fraternity throughout his life and left it a generous bequest at his death. During the summer of 1910 he and four friends sailed on a freighter from Philadelphia to Manchester, England, where they toured the British Isles, returning for the opening of the university in the fall. He was graduated in 1912 and joined the family firm with his father and older brothers in Goldsboro.

Not satisfied in his father's business, Yelverton spent a year at the Harvard University Business School and decided on a career in the foreign service. After taking the foreign service examination on 19 Jan. 1914 and passing it, he was appointed American consular assistant on 14 Apr. 1914 and detailed to the Department of State in Washington, D.C. His father was a prominent member of and heavy contributor to the Democratic party in North Carolina and a close friend of Walter Hines Page, whom President Woodrow Wilson had appointed ambassador to the Court of St. James. On 1 Feb. 1915 Yelverton was detailed to the Consulate General at London. Showing promise as a young diplomat, he was then assigned to duty as vice-consul at Swansea, Wales, on 18 Nov. 1916, but on 3 Jan. 1917 he was transferred back and named vice-consul to London, serving in that post for the remainder of World War I. He was deeply saddened by the death of his only sister, Glendora, on 2 Sept. 1917 in Goldsboro and for a time was eager to return to the family. On 25 Aug. 1919 he resigned his post and left for the United States aboard the liner Mauretania.

In London he quickly had become well known in diplomatic and social circles, making many friends among people of the arts and letters and in the glittering social circles surrounding the British court even in wartime. He also studied the antique market and became an authority on seventeenth- and eighteenth-century furniture. Yelverton was named to the board of directors of the American University Union in London and was appointed by Lord Fortescue to membership on the committee for the celebration of the Sir Walter Raleigh Tercentenary in 1916.

After arriving in the United States he was detailed to the Department of State and appointed by the secretary of state to duty on the Conference for the Limitation of Armament, which convened in Washington from 15 Nov. to 31 Dec. 1921. During the conference he acted as private secretary to Oscar W. Underwood, of Alabama, one of the most powerful members of the U.S. Senate.

Returning to Goldsboro, he made his home with his aging father and brother Edgar, his mother having died in 1922. He was a member of the firm of W. T. Yelverton and Sons and sometimes listed his occupation as "merchant." He represented Wayne County in the General Assembly in 1925 and 1927.

In 1929 the legal suit and court trial over the will of his father, who had died the previous year, drew an extraordinary amount of sensational news coverage statewide and deeply divided his family. The settlement of the suit in favor of the brothers Harrison, Edgar (who died during the trial), and their widowed sister-in-law, Mrs. Leslie Yelverton, gave Harrison the financial independence that seemed essential to his happiness.

Long interested in architecture, he speculated in real estate development, and a number of Colonial Revival–style cottages with antique woodwork, built in southeastern Goldsboro, date from this period. He traveled extensively and returned to Britain and the Continent a number of times. Yelverton joined the Wayne Lodge of Ancient, Free, and Accepted Masons and was an active member of the North Carolina Art Society and of St. Stephen's Episcopal Church in Goldsboro. At his death he left St. Stephen's parish a large bequest that paid for a substantial capital improvement to the parish hall. The handsome iron fence that surrounds the churchyard came from the elegant town house designed, according to the family, by the New Jersey architect G. S. H. Appleget, that his father had built on John Street in Goldsboro. This large two-story home, constructed in a cruciform plan, was ornamented with marble mantles and elaborate parquet floors. Featuring a spiral stairway in the circular, center hall, it was one of the most sophisticated and elegant Italianate-style houses in the state and represented the architectural and cultural renaissance that merchant-princes helped bring about in North Carolina during the postbellum period. The house was razed about 1957.

Yelverton never married. He was buried on the family lot in Willowdale Cemetery, Goldsboro.