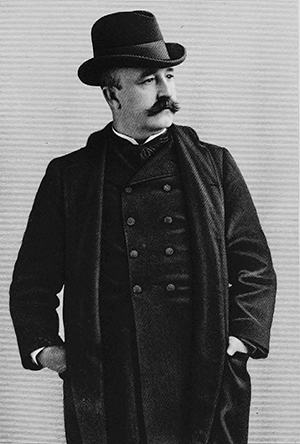 Patrick Henry Winston, Jr., lawyer and journalist, was born in Windsor, Bertie County, the son of Patrick Henry, Sr., and Martha Elizabeth Bird Winston. He attended the Horner School in Oxford, and during the Civil War, in December 1864 at age seventeen, he was an aide-de-camp to Governor Zebulon B. Vance. In March 1865 he entered the Confederate army and was en route to join the Fourth North Carolina Cavalry when word arrived of the surrender of General Robert E. Lee. There is a family story that Winston spent so much time saying goodbye to his many kinfolk that the war ended before he arrived.

Back home from his unsuccessful journey to find his unit, he entered The University of North Carolina and in 1867 was graduated as valedictorian of his class of eleven. He read law under his father and was licensed to practice on 8 June 1868. Like many other Southerners after the war, Winston moved to Baltimore, where he was also licensed and practiced law for two years. There he was introduced to Virginia Beeson Miller of Pittsburgh and proposed marriage to her at their first meeting. She was the daughter of Maria Morrow and Alexander Hamilton Miller, a prominent lawyer of Pittsburgh. They were married on 5 Jan. 1870 and lived in the Millers' home. Winston received a license in Pennsylvania and joined his father-in-law's law firm. The Winstons' son, Patrick Henry Winston III, was born on 10 Feb. 1871 but died on 3 July.

Winston was a delegate from Pennsylvania to the 1872 Democratic National Convention, in Baltimore, which nominated Horace Greeley. In December 1873 he moved his family, now consisting of a young son and a daughter, to North Carolina, where he began practicing in Windsor. In 1874 he became co-owner and editor of the local newspaper, the Albemarle Times, and in the fall of that year he was elected reading clerk of the state senate. In 1875 he became a trustee of The University of North Carolina, and in 1876 he was a North Carolina delegate to the Democratic National Convention in St. Louis, which nominated Samuel Tilden. Governor Vance appointed him a director of the Albemarle and Chesapeake Canal in 1877.

Never one to put down deep roots, lawyer Patrick Winston had left Windsor by 1882 and moved to the Forsyth County seat of Winston. Soon afterwards he made another surprising move. In September 1883, in a published "open letter," he announced his switch of allegiance from the Democratic to the Republican party. This apparently precipitated his fall into disfavor among his Tar Heel peers. His new party, however, chose him as a delegate to the 1884 Republican National Convention in Chicago, where, in a brilliant speech, he seconded the nomination of Chester A. Arthur for a second term. In the same year President Arthur appointed him minister to Zurich, but his wife refused to move to Switzerland. Winston then was appointed registrar of the U.S. Land Office in Lewiston (now Idaho) and thereby became a southern émigré.

Apparently Winston went to Lewiston alone, but he returned to North Carolina in a couple of years to collect his family. He resigned his position as registrar in 1886, and by the end of 1887, or early the next year, the family settled permanently in what was then Spokane Falls, Washington Territory. On 4 Apr. 1888 Winston became the editor and one of four co-owners of the Spokane Review. By the end of November 1888 he had resigned as editor and soon resumed the practice of law.

In 1889, immediately following the admission of Washington into the Union, President Benjamin Harrison appointed Winston U.S. district attorney, a post he held until removed by President Grover Cleveland. He then became involved in Washington State political activity during the campaigns of 1892 and 1896. Joining the Silver Republicans in 1896, he was elected state attorney general on the Fusion ticket by a large majority.

Exertion during the state senatorial campaign of 1897 undermined Winston's health, and after a year's illness he spent nine months with his brother, George Tayloe Winston, in Austin, Tex. He then went back to North Carolina and subsequently entered a sanitarium in Maryland. In 1900 he returned to his law practice in Spokane. On 22 Aug. 1903 he published the first issue of a new newspaper, Winston's Weekly, which he continued until his death. Recounting his experiences, philosophy of life, and nostalgic recollections of his childhood in North Carolina, it proved to be a popular journal with a circulation far beyond the northwestern region. Following his death of apparent heart failure in a Spokane hotel he was buried in the city's Greenwood Cemetery. Winston was an Episcopalian.