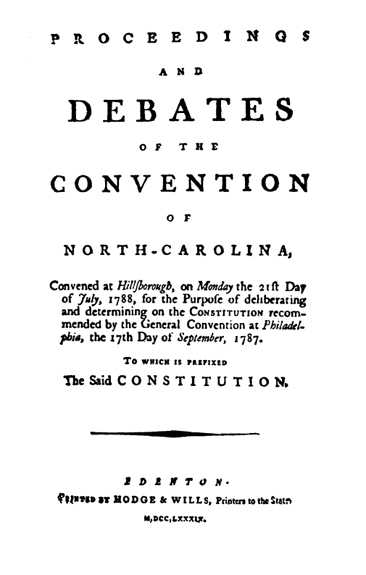 In December 1787 or January 1788, several decades after the introduction of printing in North Carolina in 1751 by James Davis, Henry Wills, at age twenty-three, succeeded Andrew Blanchard as the partner of Abraham Hodge in the printing business. Hodge had gained printing experience during the Revolution operating a traveling press of Samuel Loudon of New York for George Washington. The printing office of Hodge and Wills was located on Pollock Street in New Bern opposite the area where tobacco was inspected. Judging from the numbering and date of the earliest extant issue of their weekly newspaper, the State Gazette of North Carolina, the firm apparently was established in 1785. The paper was eight pages or two folded sheets, and subscriptions cost twenty-five shillings per year.

In the summer of 1788 the printing business was moved to Edenton, where the newspaper was continued under the same title and with the same partners. According to Griffith J. McRee in The Life and Correspondence of James Iredell, the move to Edenton was a result of the persuasion of James Iredell. Maurice Murphy, who operated a printing business in Edenton, sold Hodge and Wills his printing office on 1 Nov. 1788 for £125. William Righton sold Hodge and Wills, for £125, the printing press, "tipes," and materials he had recently bought from Maurice Murphy.

In July 1792 Hodge and Wills began another newspaper, the North Carolina Journal, in Halifax. On 2 Mar. 1793, according to a newspaper notice, Hodge and Wills dissolved their partnership in newspaper publishing. Hodge became the sole proprietor of the Halifax newspaper and Henry Wills that of the State Gazette of North Carolina in Edenton. However, they continued their association as state printers. In the issue of 2 Nov. 1797 it was announced that Henry was retiring and that his brother James would become the publisher of an enlarged newspaper.

Between 1788 and 1797 Hodge and Wills were "Printers to the State," having been elected by the two houses of the legislature for the purpose of printing the laws and journals of the General Assembly, the Governor's proclamations, and any other bills that might be ordered. During that period, according to Douglas McMurtrie, considering both governmental and nongovernmental publications, they printed thirty-six titles in Edenton and ten in Halifax. William S. Powell, in his revision and supplement to the work of McMurtrie, added one imprint each to the Edenton and Halifax lists. McMurtrie also listed one imprint, not located, that was printed in Edenton by Henry Wills.

As early as 1788 Hodge and Wills were selling books and supplies at their printing office. By 1789 they offered such items as spelling books, ink, and sealing wax. In December 1794 Wills offered more than fifty books for sale at the printing office. By October 1797, shortly before he retired as a printer, he advertised "bed-ticks" and cloth goods for sale at his general store. By 1799 he was offering sugar, coffee, chocolate, spices, peach brandy, and rum. Later, in 1819, he dealt in family Bibles, stationery, blank books, and school books. From 1817 to 1819 Wills served as postmaster at Edenton, and in 1819 he was a deputy clerk of the court. He was listed as a member of the Bible Society of North Carolina in 1816.

Wills married twice. His first wife was Lydia Loudon (23 Oct. 1766–9 Apr. 1817), the daughter of Samuel Loudon, a New York printer with whom Abraham Hodge had worked before moving to New Bern. They had three sons: Samuel, Henry, and James. Samuel (according to the key to the lost St. Paul's Episcopal Churchyard map) died in 1802 and was buried next to his mother, although there is no gravestone. There were two daughters: Sarah Loudon (m. William Bennett Roberts) and Mary Louisa (m. Josiah Finch of Raleigh). The second marriage of Henry Wills took place on 9 Apr. 1820 to Mrs. Ann White, the widow of John D. White of Petersburg, Va.

Wills died at age sixty-three and was buried beside his first wife at St. Paul's Episcopal Church, Edenton.

George Blake Holmes, History of Saint Paul's Episcopal Church in Edenton, North Carolina, Together with a Guide to the Churchyard Epitaphs (1964).