The North-Carolina Gazette, established by printer James Davis in New Bern, was North Carolina's first newspaper. Judging from the earliest extant copy-volume 1, number 15-the first issue was published on 9 Aug. 1751. Davis had emigrated from Virginia at the behest of the colonial Assembly, which urgently needed a printer to disseminate revised laws. North Carolina and Georgia were the last original colonies to acquire a printing press; many North Carolinians depended on the Virginia Gazette for news and for business and legal advertising. In many ways that paper served as North Carolina's newspaper. James Davis may even have been associated with the Virginia paper before emigrating south. 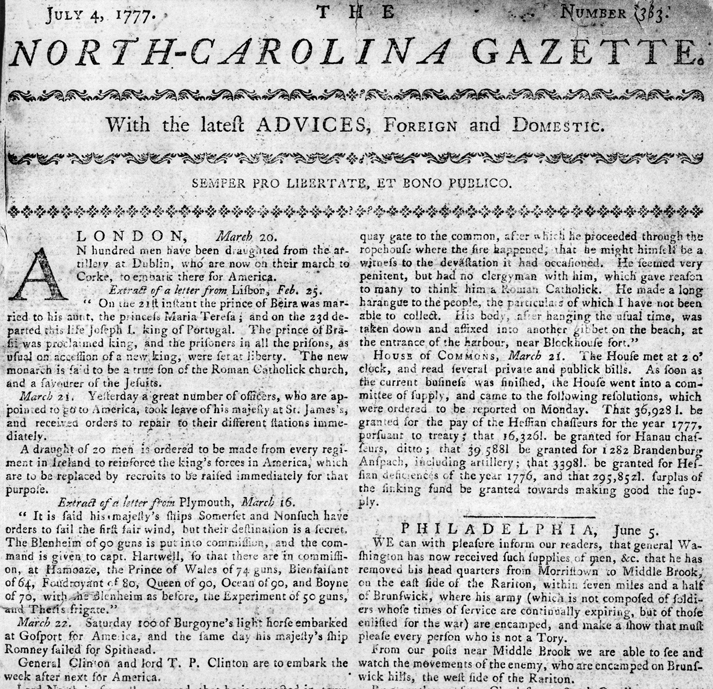 The North-Carolina Gazette had neither headlines nor column rules. It mostly provided international news, with emphasis on the arrivals and departures of ships. It thus presented little local or state news and offered no editorials. Periodically, the paper carried advertising, mainly notices from local merchants about new stocks of goods, some legal advertisements, and rewards for runaway slaves. Although it was supposed to be a weekly newspaper, the Gazette had no regular day of publication during its early years. The day of publication was altered or stopped temporarily many times and ultimately suspended in about 1759.

After four years of experimenting with the state's first magazine, the North Carolina Magazine, Davis revived the North-Carolina Gazette on 27 May 1768 with a larger page size and a new volume 1. But a violent storm in September 1769 destroyed his printing shop and buried the type in sand. A few months later he resumed operations but only intermittently. Due to the great difficulty in obtaining paper during the Revolutionary War, no other newspaper had appeared in North Carolina since 1775. In 1778 Davis was also forced to suspend publication when his son and assistant, Thomas Davis, was conscripted into the colonial army.

James Davis subsequently made another attempt to revive the North-Carolina Gazette, this time with Pennsylvanian Robert Keith. The first issue was dated 28 Aug. 1783, two years before Davis's death. With Davis in ill health, Keith took charge, naming the paper the North Carolina Gazette; or, Impartial Intelligencer and Weekly General Advertiser. The paper still had no headlines or column rules and offered little local news. The last known issue is that of 2 Sept. 1784. Another version of the newspaper was published from 1786 to 1798 by François X. Martin, who used the paper to support the Bill of Rights and other causes.

Isaiah Thomas, History of Printing in America: With a Biography of Printers and an Account of Newspapers (1970).