Robert Lynn Williamson, tobacco manufacturer and agriculturist, was born at Sunnyside, the family plantation in the Locust Hill section of Caswell County. He was the oldest son of Thomas Farish, a pioneer tobacco manufacturer and planter, and Lydia Minerva Harris Williamson. His father's younger brother was James N. Williamson, Sr., a well-known early cotton manufacturer in Alamance County. Robert Lynn Williamson was named for his great-grandmother's brother, Linn (Lynn) Banks, a member of the Virginia legislature for twenty-four years (speaker of the house for eighteen of them) who was serving his third term in Congress at the time of his death. His maternal grandfather, William G. Harris, a Chatham County planter, was elected to the North Carolina Senate in 1860. Young Williamson found no interest in political office but chose to follow the family aptitude for manufacturing and agriculture. After private schooling in Caswell County, he worked in his father's plant, T. F. Williamson and Company, gaining practical experience in the manufacturing of plug and smoking tobacco. 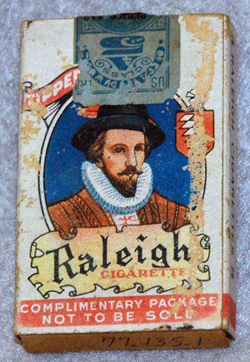 In 1878 he moved to Winston, a town with many small tobacco factories, where he became superintendent of the T. L. Vaughn Tobacco Company. In Winston he met George T. Brown, the son of another early tobacco manufacturer; they became friends and, later, brothers-in-law. When Brown found himself with 100,000 pounds of tobacco that he could not sell because of the panic of 1893, the time seemed opportune to form a partnership with Robert L. Williamson in order to turn this leaf into saleable products. The two men complemented each other: Brown with experience in marketing and Williamson with expertise in manufacturing.

Through the years Brown and Williamson had bought several tobacco firms and added their brands—among them Sir Walter Raleigh smoking tobacco—to its original ones. Early in 1926 the purchase of R. P. Richardson Company of Reidsville brought Old North State tobacco and cigarettes. That summer Williamson suffered a heat stroke, which affected his eyesight, and he realized that he could not be as active in the firm as formerly. Fries's other business interests took so much of his time that he had become only a figurehead for Brown and Williamson, which until now had been a privately owned company with the few shares of stock in the hands of family members. In order to compete nationally in the cigarette market, additional personnel and new financing were needed, so a search was begun. On 23 Mar. 1927 the company was reorganized as Brown and Williamson Tobacco Corporation with Charles A. Kent as president and R. L. Williamson as first vice-president. Soon negotiations were concluded that made the firm a subsidiary of the British-American Tobacco Company. 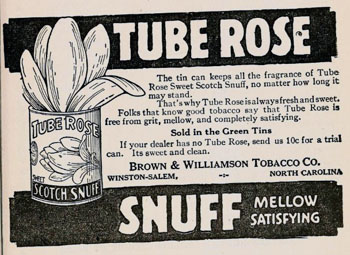 Williamson had an abiding love of the land and a continuing interest in agriculture, as had his father and both grandfathers. He had owned several farms around Winston-Salem. His last one, on the southern border of town, received its name, Twilight Dairy Farm, from a group of his friends who pointed out that his busy days as a tobacco manufacturer left him only the early evening hours (twilight) in which to visit his farm. He believed in growing his own feed for his dairy herd and liked to try the latest improved varieties, particularly of lespedeza and alfalfa.

A big man physically, Williamson was over six feet tall and stout. He was extremely independent and very conservative in his opinions and business dealings, thrifty, but generous with his family and close friends. He had many of the latter. This was especially evident during the last five years of his life; as his health deteriorated they would come—young and old men alike—to sit and visit with him. "Mr. Rob" was well thought of by the workers in Brown and Williamson's factories; he knew them all, helped many of them through financial crises, and several named their sons for him. He owned one of the first automobiles in Winston and was among the early members of the Twin City and Forsyth Country clubs.

On 26 Nov. 1889 he married Minnie Thompson, whose younger sister Elsie married George T. Brown in 1893. Williamson and his wife had three children, all of whom died in infancy. After the birth of their third child and before their fourth wedding anniversary, Williamson's young wife died. He never remarried. He died at his home in Winston-Salem and was buried beside his wife and children in Salem Cemetery.