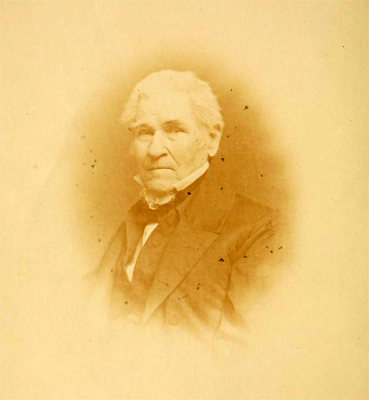 John Fanning Watson, historian, financier, and correspondent of John Hill Wheeler, was born at Batsto, N.J., the son of William and Lucy Fanning Watson. His father, a Philadelphia shipowner and sea captain, was lost in a storm off Cape Hatteras. His mother was a member of the large Fanning connection of Connecticut and Long Island, to which Edmund Fanning and the Reverend William Fanning, active in eighteenth-century North Carolina, also belonged. John H. Wheeler, in his 1851 history of North Carolina, referred to Watson's published genealogical material in his sketch of Edmund Fanning.

John Watson's education was at sea and in the countinghouse. A onetime clerk in the War Department, he resigned in 1804 and was later appointed commissary of provisions for the army posts in Louisiana. Returning to Philadelphia after the death of his father in 1806, he first was a bookseller and then tried publishing. In 1814 he became cashier of the newly organized Bank of Germantown, a position he held until 1847, when he became secretary-treasurer of the Philadelphia, Germantown, and Norristown Railroad. He resigned in 1859. As a resident of Germantown he devoted much of his time to the study of the early history of New York and Philadelphia and published several books on each. He also was the author of many other books, pamphlets, and articles in journals.

Having a particular interest in the Revolutionary Battle of Germantown, Watson had a monument erected over the grave of General Francis Nash of North Carolina at Kulpsville, where Nash had been taken when mortally wounded during the battle. He also placed a monument over the mass grave in the Upper Burial Ground in Germantown to six soldiers who had been killed in the battle. He himself composed the inscriptions on both monuments.

Watson was married in 1812 to Phoebe Barron Crowell of New Jersey. From an 1817 genealogy of the Crowell family that he compiled, it appears that he was aware that two members of this family, John and Edward, had moved from New Jersey to Halifax County, N.C., in the mid-eighteenth century. The manuscript also cited the unvalidated legend that the New Jersey family was founded by two brothers of Oliver Cromwell who fled to America at the time of the Restoration. 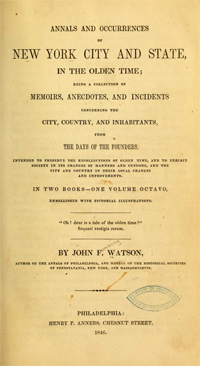 In the fall of 1851, John H. Wheeler went to Philadelphia to arrange for the publication of his History of North Carolina. He had not previously met Watson and called on him in Germantown with a letter of introduction. Not finding him at home, Wheeler wrote Watson a note dated 18 September asking for an interview, saying that he had called without success to thank him in person on behalf of the state of North Carolina for honoring its heroes who had died in the Battle of Germantown. He also sought copies of the epitaphs and excerpts from Watson's manuscript history of the Crowell family that were included in Wheeler's history.

It is interesting to speculate on whether Watson had any effect on Wheeler's 1860 trip to Nova Scotia to obtain a copy of the narrative of David Fanning in possession of descendants there. Fanning, the notorious North Carolina Tory partisan leader, had gone to Nova Scotia to live in exile at the end of the American Revolution.

Watson and his wife Phoebe were members of St. Luke's Episcopal Church and were buried in its churchyard. Their children were Barron E., John H., Myra, Selina (m. Charles Willing), and Lavinia (m. Harrison Whitman of Portland, Maine). In a footnote in his 1851 history, Wheeler stated that one son of John Watson was then living in Wilson, N.C.; however, he eventually returned to the Philadelphia area.

John F. Watson was regarded as one of the greatest local historians in the United States. In compiling the Annals of Philadelphia (1830) and the Annals and Occurrences of New York City (1846) he interviewed many elderly residents, mostly illiterate people with prodigious memories, and thus obtained information about the early period of both cities that would have soon been lost. Not the least of his endeavors was his role in the establishment of the Historical Society of Pennsylvania in 1824. A portrait of Watson, painted by A. B. Lockey, is in the society's collections, donated by Watson in 1852.

William Sowitzky, Paintings and Miniatures in the Historical Society of Pennsylvania (1942).

Dorr, Benjamin. A memoir of John Fanning Watson, the annalist of Philadelphia and New York. Prepared by request of the Historical Society of Pennsylvania, and read in their hall ... February 11, 1861. Philadelphia: Collins, Printer. 1861. https://archive.org/details/memoirofjohnfann00dorr (accessed December 27, 2013).

Watson, John F. (John Fanning). Annals of Philadelphia and Pennsylvania, in the olden time: being a collection of memoirs, anecdotes, and incidents of the city and its inhabitants, and of the earliest settlements of the inland part of Pennsylvania, from the days of the founders. Intended to preserve the recollections of olden time, and to exhibit society in its changes of manners and customs, and the city and country in their local changes and improvements. Philadelphia: Edwin S. Stuart. 1884. https://archive.org/details/annalsofphiladel1884wats (accessed December 27, 2013).

Dorr, Benjamin. A memoir of John Fanning Watson, the annalist of Philadelphia and New York. Prepared by request of the Historical Society of Pennsylvania, and read in their hall ... February 11, 1861. Philadelphia: Collins, Printer. 1861. https://archive.org/stream/memoirofjohnfann00dorr#page/n9/mode/2up (accessed December 27, 2013).