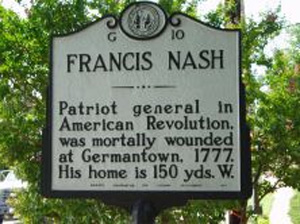 Francis Nash, lawyer and Revolutionary general, was born in Amelia (now Prince Edward) County, Va., the son of John and Ann Owen Nash. Between 1725 and 1730 his parents, both natives of Tenby, Pembrokeshire, Wales, had immigrated to Virginia, where John Nash purchased five thousand acres at the confluence of the Appomattox and Bush rivers near present-day Farmville. An older brother, Thomas, was also born in Wales; another brother, Abner, was a North Carolina statesman and congressman. Nothing is known of Francis Nash's education, but sometime before 1763 he moved to North Carolina and settled in Childsburgh (renamed Hillsborough in 1766), where he invested in a store and set up a law practice. In 1763 he was appointed clerk of the superior court of Orange County and soon afterwards became clerk of the inferior court of the county, both very lucrative positions.

Nash represented Orange County in the colonial Assembly in the sessions of 1764–65 and 1771 and in the First Provincial Congress in 1774, as well as the borough of Hillsborough in the Assembly in 1773, 1774, and 1775. He also was the Halifax borough representative in the Third Provincial Congress in 1775. In 1768, as a part of the early complaints of the Orange County Regulators, he was wrongfully accused of receiving illegal fees but was exonerated. In 1771, as a captain of militia, Nash participated in the Battle of Alamance against the Regulators.

Presumably in 1770 he married Sarah (Sally) Moore, the daughter of Judge and Mrs. Maurice Moore. They became the parents of two daughters: Anna (called Nancy), probably born in 1771, who died at age thirteen; and Sarah (Sally), born in 1773, who married rice planter John W. Waddell of the Cape Fear area. On 3 Mar. 1784 the Orange County court apprenticed Francis Nash (aged thirteen?), the illegitimate son of the late Francis Nash and a barmaid at the Blue House in Hillsborough, to Roswell Huntington, the silversmith. Young Nash soon ran away and apparently went to Tennessee.

In the summer of 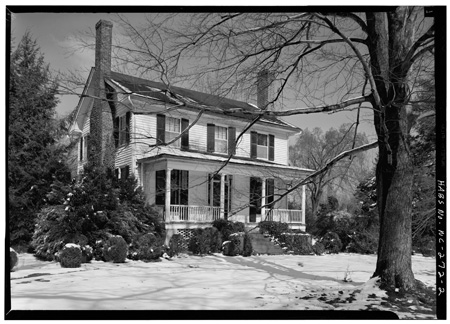 1775 the Provincial Congress directed that two regiments be raised, and Francis Nash was appointed lieutenant colonel of the first. Following the promotion of the regimental commander, James Moore, Nash became commander and was promoted to colonel in April 1776. Under his command, the regiment was present at the unsuccessful British attack on Charles Town, S.C., on 25 June.

Returning to North Carolina, Nash's regiment in November 1776 was ordered to join the Continental army operating under General George Washington in the northern states, but these orders were rescinded because of threatened British and Indian attacks on Georgia. Nash, who had been commissioned brigadier general by Congress on 5 Feb. 1777, was again ordered north in March. With the illness and death of General James Moore, Nash assumed command of the entire North Carolina brigade of nine regiments. In June the brigade arrived at Philadelphia, remaining there until Washington and the Continental army marched from the vicinity of New York to Delaware to oppose a British invasion of Pennsylvania via Chesapeake Bay. The British objective was Philadelphia, the American capital. On 11 Sept. 1777 the two armies collided at the Battle of Brandywine, Pa., in which the Americans were defeated. Nevertheless, Nash and his North Carolinians rendered signal service in helping stem the British advance. 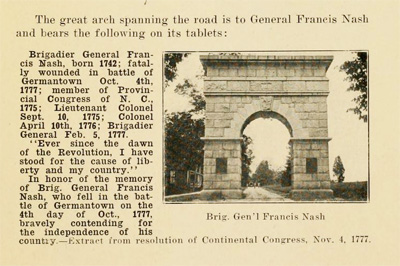 With the capture of Philadelphia by the British on 26 September, Washington, regrouping his army, attacked the British-Hessian forces at Germantown, near Philadelphia, on 4 October, and was again defeated. In this action General Nash received a hip wound from a cannonball that proved fatal. He died three days later at the home of Adam Gotwals, on the Forty Foot Road, near Kulpsville, Pa., and was buried on 9 October at the Towamencin Mennonite Meeting graveyard beside three other officers who had also perished from wounds received at Germantown. Washington and his generals attended the funeral. Two monuments, one erected in 1844 and the other in 1936, mark the spot. His dying words were reported to have been: "From the first Dawn of the Revolution I have been ever on the side of liberty and my country." General Nash quickly came to be recognized as a North Carolina hero, and his death inspired renewed support in the state for the Revolution.