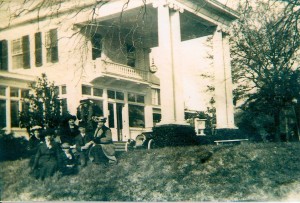 Sarah (Sadie) Wharton Green Jones Walters, society leader and the creator of Airlie garden, near Wilmington, was born at the residence of her maternal grandparents in Jamaica Plains outside of Boston, the daughter of Colonel Wharton and Esther Ellery Green. Her grandfather Thomas Jefferson Green was among the noted men of his day in North Carolina, and her mother was from a prominent New England family. Taken to North Carolina in infancy, Sarah was reared at her father's plantation, Esmeralda, on Shocco Creek in Warren County. Here were spent the difficult years of the Civil War. When the conflict was over, Wharton Green and his family moved to Tokay in Cumberland County. In St. John's Church, Fayetteville, Sarah Green married Pembroke Jones of Wilmington on 27 Nov. 1884. For some months thereafter, the young couple lived in Washington, D.C., where Mrs. Jones acted as hostess for her father who was then a congressman.

On settling in Wilmington, the Joneses bought the Edward Bishop Dudley Mansion on Front Street in 1885 for their residence. Shortly afterwards they also acquired a 150-acre tract on Wrightsville Sound, near Wilmington, and built a small cottage as a weekend retreat, naming the property Airlie after a Jones ancestral seat in Scotland. The cottage, gradually expanding to a large rambling house, became their principal home in Wilmington; they sold the Dudley house to James Sprunt in 1894.

Impressed with the native magnolias and wild azalea, or honeysuckle, growing in the Airlie woods, Sarah Jones decided to create a spring garden there. Over the years, the project expanded with pools, paths, and carriage ways laid out in an informal manner, embellished with statuary and other ornamentation. The garden was largely devoted to azaleas, camellias, wisteria, and other spring flowering plants. R. A. Topel, a former undergardner of the German kaiser, was engaged to assist Mrs. Jones. Here he developed the topel tree, an unusual hybrid formed from grafting the native yaupon on another holly. In its prime, the Airlie garden was considered among the best of its kind.

The Joneses also bought several thousand acres adjoining Airlie that they maintained as a hunting preserve. Here in 1908 they had a pavilion built in the Italian Renaissance style for entertainment purposes. Designed by their son-in-law, John Russell Pope, the building gradually fell into ruin after Mrs. Jones's death.

Sarah and Pembroke Jones were the parents of a son, Pembroke, who married but left no issue, and of a daughter, Sarah, who married John Russell Pope of New York. Pope, a noted neoclassic architect, designed many public buildings in Washington and was responsible for the wing added to the British Museum in London to house the Elgin Marbles. The Popes had a daughter, Jane, who married Anthony Akers.

Pembroke Jones died in 1919, and Sarah Green Jones married in 1922 Henry Walters, their lifelong friend. Walters was a noted railway magnate, yachtsman, and art collector whose main residence was in Baltimore; he was the son of William T. Walters, an organizer of the Atlantic Coast Line system that resulted in untold benefit to North Carolina. After their marriage, Mrs. Walters continued to winter at Airlie and summer at Newport. Walters was active in the affairs of Wilmington and a portrait of him, commemorating this association, hangs in the city hall there. At the time of his death in 1931, he was chairman of the board of the Atlantic Coast Line, which then had its main office in Wilmington. Having no children, Henry Walters bequeathed his fine art collection and a gallery to house it to the city of Baltimore.

Mrs. Walters survived her second husband by over a decade. In 1941 her own art collection, consisting mostly of eighteenth-century French furniture, statuary, and tapestries, was sold at Park-Bernet for over $600,000, which was considered a large sum for the times. Sarah Green Jones Walters died in her apartment at the Plaza Hotel in New York after a short illness and was buried beside her first husband in Oakdale Cemetery, Wilmington. A portrait of her as a young girl of fifteen was owned by her granddaughter, Mrs. Jane Pope Akers, of Palm Beach, Fla.

According to Jane Akers, Pope

According to Jane Akers, Pope had 3 daughter, Jane, Mary and another who died in infancy

Some of your information is

Some of your information is not correct. The hunting lodge was designed by Barney & Stewart; a small "temple of love" was designed by Pope (and possibly the gates). It is also likely the Jones Mausoleum was designed by Pope as was a small residence, but he is not known to have designed public buildings in Wilmington.
see Samuel Howe, American Country houses of Today (1915?)

Thank you for visiting NCpedia and taking time to alert us to these issues. I will research these questions and how we might update the entry.  If you have any additional resources that you think would be useful, please feel free to post another comment back here.