Pembroke Jones, financier and social leader, was born in Wilmington, the son of John Pembroke and Jane London Jones. His father, a native of Virginia, was graduated from the U.S. Naval Academy in 1852 and during the Civil War was an officer in the Confederate Navy, serving for a time on the Merrimac. His mother died when he was young, and he was reared by a maternal aunt in Wilmington, Mrs. Platt K. Dickinson. She and her husband were childless, and on their deaths bequeathed to Jones what amounted for the times to a modest fortune. This enabled Jones to enter the rice milling business in Wilmington; he later expanded to New Orleans as well.

On his marriage to Sarah Wharton Green, the daughter of Colonel Wharton Green, in 1884, Jones and his wife became leaders in the civic and social life of Wilmington. During this period, Henry Walters, the railroad magnate, became ill of typhoid while in Wilmington on business. Mr. and Mrs. Jones took him into their home and nursed him back to health. A lifelong friendship followed; many years later Henry Walters married Mrs. Jones after the death of her husband. Moreover, Walters gave Jones financial advice which enabled him to accumulate a large fortune in railroad securities.

With their increased affluence, the Joneses moved to New York City and set as their goal acceptance into the "400," the innermost circle of New York and Newport society, then at its most flamboyant. (This era has been referred to by social historians as the Gilded Age.) They consulted Harry Lehr, the successor to Ward McAllister as social arbiter of New York, who agreed to sponsor them. Lehr advised Jones and his wife to feed New Yorkers well, and they would be eating out of their hands. Mr. and Mrs. Jones accordingly hired both a Russian chef and a black cook from the South, and they soon became noted for lavish entertaining. Given the hostility towards the South following the Civil War, it was no mean accomplishment for a young Southern couple to be accepted into this essentially alien world. After becoming established in New York and Newport, Jones purchased in 1908 the Theodore Havemeyer residence in Newport as a summer home. Naming the place Sherwood in honor of one of his ancestors, he almost completely rebuilt the house. The mansion, later converted into an apartment house, still stands on Bellevue Avenue.

After moving to New York, Jones maintained his interest in his native city and encouraged the development of Wilmington as a seaport. He and his wife continued to spend part of the year at their estate, Airlie, where Mrs. Jones developed a noted azalea garden. For many years they gave a Christmas tree party at Airlie and invited scores of children from prominent Wilmington families. Airlie, too, was the scene of numerous house parties at which Jones entertained business and social leaders of international prominence. 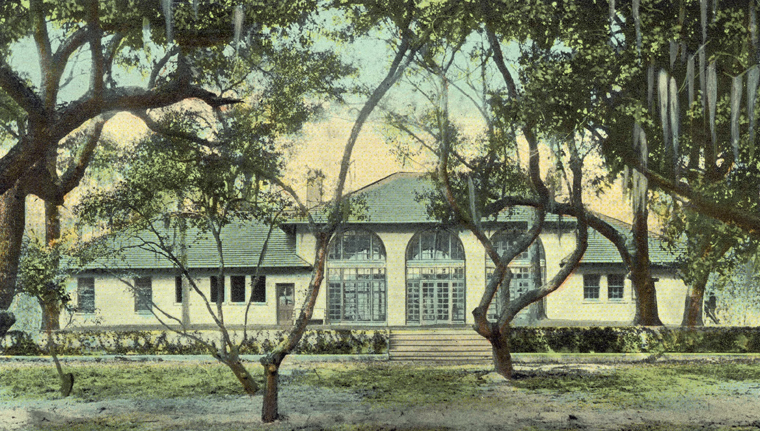 Caught up in the enthusiasm with which New York society supported the allied war effort, Jones—on 17 June 1917—placed his town house at 5 East 61st Street in New York City at the disposal of the Italian Royal War Mission. In 1918 he was a member of the War Trade Board in Washington, D.C. At the time of his death early in 1919, Jones was vice-president of the Carolina Shipbuilding Corporation, which then had several ships under construction in Wilmington.

Jones died in New York following an operation and was buried in Oakdale Cemetery, Wilmington. He and his wife were the parents of a son, Pembroke, and a daughter, Sarah, who married John Russell Pope, the architect. Mrs. Jones survived her husband and later married Henry Walters. Jones left $50,000 to city officials in Wilmington to purchase and maintain a park there to be named Pembroke Jones Park. The city bought the land for the park for considerably less than that amount, and for many years the residual funds were used for maintenance. The main entrance of the park is on the corner of 14th and Market streets.