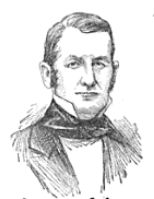 Thomas Jefferson Green, planter, legislator, soldier, and author, was born near Ridgeway, Warren County, the son of Solomon and Frances ("Fanny") Hawkins Green. His father was a lifelong resident of Warren County, which he represented in both houses of the legislature and in the second (ratifying) constitutional convention (1789). Both of his grandfathers, Captain William Green and Colonel John Hawkins, as well as his great-grandfather, Colonel Philemon Hawkins, were officers in the American Revolution. Green was a student at The University of North Carolina in 1819–20. His appointment to the U.S. Military Academy in 1822 is not surprising as the then U.S. Senator Nathaniel Macon was his great-uncle; however, he was not graduated from the academy.

After representing Warren County in the House of Commons in 1826, Green moved to Florida, then a territory, where he was listed in the earliest tax roll for Leon (now Wakulla) County in 1829. By 1831 he was justice of the peace, and in 1834 he represented Leon County in the territorial legislature. In the account of his marriage in a Nashville, Tenn., newspaper in 1830, he is called "Major Thomas J. Green of Tallahassee, Florida," which suggests that he held a commission in the territorial militia. He was married in Davidson County, Tenn., on 8 Jan. 1830, to Sarah Angeline Wharton, daughter of Jesse Wharton, a U.S. senator and congressman. Their only child, Wharton Jackson Green, was born near St. Mark's in Leon County, Fla., on 28 Feb. 1831.

Green left Florida soon after the death of his wife on 11 Mar. 1835. After leaving his young son in Tennessee with the family of his maternal uncle, Joseph Wharton, he traveled to the then Republic of Texas. There he organized the Texas Land Company and, along with Dr. Branch T. Archer and the Whartons, purchased and laid out the now extinct town of Velasco at the mouth of the Brazos River. Soon after his arrival in 1836, he was commissioned brigadier general in the Texas army and returned to the United States to recruit men and collect money and ammunition for the cause of the Texas revolution against Mexico. He took his private fund of ammunition to Houston in the early part of 1836, when immigrants to Texas were raised from North Carolina, South Carolina, Mississippi, Georgia, Virginia, Louisiana, Kentucky, and perhaps other southern states. On 3 Oct. 1836, General Green represented Bexar County in the house of representatives of the first congress of the Republic of Texas. The following year he was elected to the senate of the second congress, but his seat was declared vacant twenty-five days after the session opened. 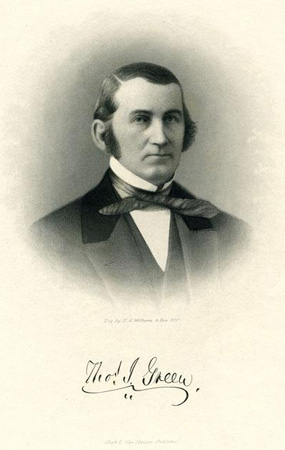 When a counter invasion to Mexican attacks was opposed by Sam Houston, Green was among the 304 men under General Alexander Somervell who remained in Mexico and thus precipitated the ill-fated Battle of Mier on 25 and 26 Dec. 1842. As commander of the Mier Expedition, Green surrendered to General Pedre Ampudia; he was held at Perote prison from which he, with fifteen others, escaped in the spring of 1843 after spending six months digging through a wall of volcanic rock eight feet thick. Returning to Velasco, Tex., he was elected in June 1843 to represent Brazoria County in the eighth Texas congress, where he introduced the bill that established the Rio Grande as the boundary line between Texas and Mexico. Green was one of the original organizers of the Texas Railroad, Navigation and Banking Company, the first chartered railroad in Texas, and was an early advocate of a railroad to the Pacific. Before leaving Texas he became a noted breeder of racing stock. During the pending negotiations for the annexation of Texas, Green was offered the post of confidential agent in the matter by President James K. Polk's administration, but he declined the position on the ground that he was then a citizen of the other contracting power.

In 1845, Green spent some time in New York in connection with his book, The Texian Expedition Against Mier, published that year by Harpers. There, on 24 Oct. 1846 in Grace Church, he married his second wife, Adeline Burr, the widow of John S. Ellery of Roxbury, Mass. She survived him, but the only child of their union died as an infant.

Four years after the annexation of Texas, Green went to California where, in the first election in November 1849, he was elected state senator from Sacramento County—having worked there for a short while in the mines. In this first California legislature he sponsored the bill for the establishment of the state university at Berkeley. On 11 Apr. 1850, the legislature elected him major general of the First Division of the California militia. Soon afterwards he was sent with an adequate force to suppress Indian disturbances in the interior. The mission succeeded. Later Green founded the town of Oro (which has since vanished) on land purchased from John Augustus Sutter in Sutter County, Calif.; he also helped lay out the town of Vallejo, the first county seat of Placer County.

Returning to North Carolina in 1857 to live in Warren County, Green engaged the famous Montmorenci plantation before purchasing Esmeralda, a 900-acre plantation on the south side of Shocco Creek, from Dr. Alexander B. Hawkins. At Esmeralda, his home for the rest of his life, Green farmed, bred blooded racehorses, and extended lavish hospitality to his friends and relations.

Green was a lifelong Jefferson-Jackson Democrat, bearing the name of the first and bestowing the name of the latter, his friend and mentor, on his only child. He was a delegate from North Carolina to the 1860 convention in Charleston. Green wanted to enlist in the Confederate Army but was prevented from doing so by the chronic affliction of gout. His will, written on 24 May 1862 "at home, near Shocco Springs," contains this characteristic item: "If this terrific and unholy war continues, it is my purpose to go into the service and should my son Wharton survive me, that he make such disposition of my body as he may prefer, with this exception, that he will not permit my wife to send it to Yankeydom." According to the biographical account of his son, Green's death at Esmeralda was caused by heartbreak over the reverses of the Confederacy. He was buried in his garden while his son, Colonel Wharton Jackson Green, was a prisoner of war at Johnson's Island, Ohio. In 1905, his remains were moved from the plantation to Fairview Cemetery, Warrenton.

General Green's body was removed from Esmerelda and is now buried in Fairview Cemetery in Warrenton N.C.
J Smith