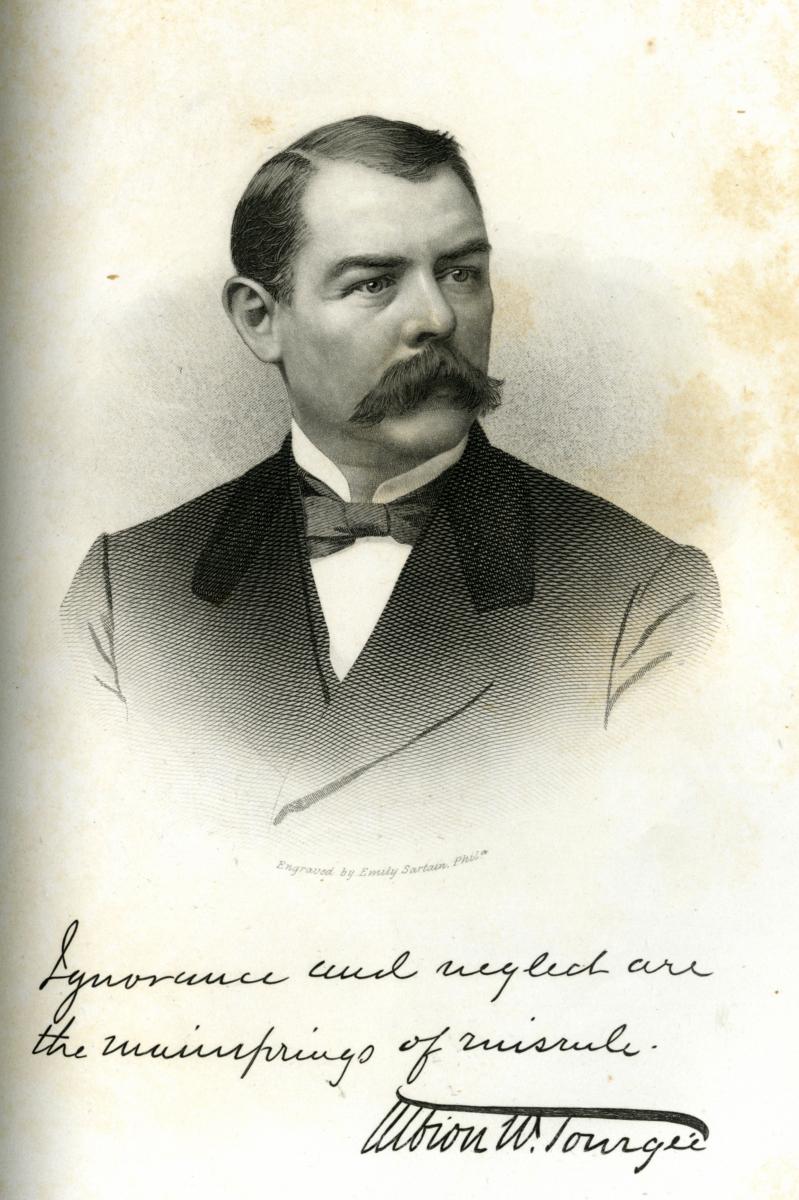 Albion Winegar Tourgée, carpetbagger, judge, writer, and equalitarian crusader, was born in Williamsfield, Ohio, the son of a Methodist farm family that migrated to the Western Reserve from Massachusetts. His father, Valentine, was a descendant of seventeenth-century French Huguenot immigrants, and his mother, Louise Emma Winegar, was of colonial Swiss ancestry. Albion attended high school in Lee, Mass., and alternately taught school and attended Kingsville Academy in Ohio. He was enrolled at Rochester University from the fall of 1859 until his enlistment in the Union army in May 1861. Paralyzed by a severe back injury received in the Battle of Manassas, he was medically discharged, but in July 1862 he reenlisted as an infantry lieutenant. He participated in the Battle of Perryville, was captured, and spent four months in Confederate prisons. He was exchanged and took part in the Battle of Chickamauga. In December 1863, still troubled by his back injury, he left the service. For the remainder of the war he served as a journalist, studied law, earned his M.A. at Rochester University, and taught school. In 1863 he married Emma Lodoilska Kilbourne; their only child, a daughter, Lodoilska (Aimee), was born in 1870.

Impressed by the needs and opportunities of the postwar South, the Tourgées migrated to North Carolina in 1865 and leased a nursery near Greensboro. Tourgée's hostility toward Confederates and his equalitarian ideals soon impelled him into Reconstruction politics and an alliance with the state's small faction of consistent Unionists. In 1866 he organized Loyal Reconstruction Leagues, championed African-American rights and a radical Reconstruction, published and edited two radical newspapers, and attended the Philadelphia Southern Loyalist Convention. The enfranchisement of the blacks in 1867 opened a new opportunity, and Tourgée was elected to the constitutional convention of 1868 and became one of its most influential delegates and a vigorous promoter of political, legal, and economic reform. He is considered especially responsible for the judicial reforms of the Reconstruction constitution. From 1868 to 1870 he served as one of three code commissioners rewriting the state's law, and in 1868 he was elected a state superior court judge.

During his six years as a judge, Tourgée provoked intense opposition with his outspoken, effective, and equalitarian Republicanism. Like all Republicans of Yankee origin, he was stigmatized as a carpetbagger and was considered "for many years the most thoroughly hated man in North Carolina." His judicial circuit was a center of racial conflict and Ku Klux Klan atrocities, including the brutal assassinations of Wyatt Outlaw and John Walter Stephens in Alamance and Caswell counties respectively. Nonetheless, Tourgée also won recognition for his ability, candor, and courage. He was an excellent judge, and his role in reforming the law brought praise. Becoming one of Greensboro's leading citizens, he was active in a variety of community affairs and was a founder of the African American school that became Bennett College. He promoted industrial and railroad development and conducted one of the region's early wood-turning industries. Despite ostracism, persecution, and frequent danger, Tourgée proved himself an able and involved citizen of his adopted state, and much in his conduct and achievement demanded respect. There were some remarkable exchanges of mutual admiration between Tourgée and his Southern foes, but Reconstruction politics and the issue of race drove an implacable wedge between them.

Following his judgeship Tourgée was often denied electoral opportunity within his own party because of his Yankee origins. He was, however, elected to the constitutional convention of 1875, where he played a central role. In 1876 he moved to Raleigh as a federal pension agent, and in 1878 his anonymous "C" letters, which humorously exploited Democratic party factionalism, won statewide attention. In the same year, having finally obtained a Republican nomination, he was trounced as a congressional candidate. Convinced that he would never be anything but an alien in the "redeemed" South and probably anticipating an adverse reaction to his forthcoming novel, Tourgée decided to leave. In 1879 he moved to Colorado and an editorial post with the Denver Evening Times. His largely autobiographical novel on Reconstruction, A Fool's Errand by One of the Fools, appeared that year and, becoming a sensational success, brought a small fortune and a new career. Five years earlier Tourgée had published a first novel, Toinette: A Tale of the South, which dealt with race relations in the slave South, and in 1880 he completed a second Reconstruction novel, Bricks Without Straw. Three additional novels on the Civil War period followed, but Tourgée's two Reconstruction novels were the high point of his literary career. His intense concern and immense knowledge of the subject had combined with sufficient literary skill to produce powerful portrayals of conditions, issues, and character types in the Reconstruction South. Recent historical writing has largely confirmed Tourgée's analysis, and A Fool's Errand and Bricks Without Straw remain historical classics.

In 1881 Tourgée purchased a new home in Mayville, N.Y., on the shores of Lake Chautauqua. From 1881 to 1884 he published and edited a weekly literary magazine, Our Continent, which exhausted his fortune. He wrote a variety of additional novels, most of which dealt with the Lake Erie region, and he continued his journalistic work and lectured on the lyceum circuit. Remaining an ardent Republican, he was also a critic of modern industrial society, and his novel, Murvale Eastman: Christian Socialist (1890), has been considered "the most carefully considered novel of Christian socialism" ever written. His articles on a variety of social issues appeared in most of the leading journals, and from 1888 to 1898 he wrote a weekly editorial column entitled "A Bystander's Notes" for the Chicago Inter Ocean. This column typified Tourgée's incessant crusade for social reform and justice. It delved into practically every issue of the times, but his primary concern remained the race question, and he was without a doubt the nation's leading white advocate of racial equality and justice. In his editorials, essays, and books as well as his public and private affairs, he was forever exposing and denouncing white racism. He lobbied for federal aid to education and a federal election law to that end, he presented the only equalitarian position at the Lake Mohonk Conference on the Negro in 1890, and he worked with black leaders in such endeavors as the founding of the Afro American League and the passage of the Ohio antilynching law of 1896. He founded his own civil rights association in 1891 and was appointed chief counsel by Louisiana black leaders in a legal struggle that culminated in another defeat, the Plessy v. Ferguson segregation decision of 1896.

After writing a Republican campaign pamphlet for the election of 1896, The War of the Standards, Tourgée was appointed consul to Bordeaux, France, where he served until his death. His body was returned to Mayville, N.Y., and among those in attendance at his funeral were a number of the nation's black leaders. In November 1905 the black Niagara Movement sponsored nationwide memorial services in behalf of "Three Friends of Freedom"—William Lloyd Garrison, Frederick Douglass, and Albion W. Tourgée.

Edmund Wilson, Patriotic Gore: Studies in the Literature of the Civil War (1962).