Lucien Douglas Starke, newspaper editor and Confederate officer, was born at Pleasant Level near Cold Harbor, Hanover County, Va., the son of Colonel Bowling and Eliza G. New Starke. His mother was the daughter of Congressman Anthony New, a colonel in the American Revolution. As a child Starke was aware of the turmoil of the Nat Turner insurrection and later of the John Brown raid at Harpers Ferry; he wrote about both in his autobiography and diary. He attended school in Richmond and on his own initiative was apprenticed in 1841 for five years to the Richmond Enquirer, an organ of the Democratic party. In 1847 he moved to Norfolk and became foreman of the Norfolk Argus, but in 1850 he went to Elizabeth City, N.C., where, on 6 August, he established the Democratic Pioneer. 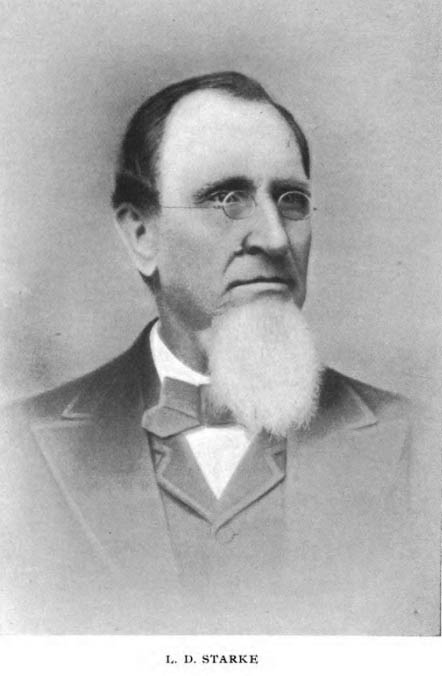 Clearly public spirited, Starke saw a local need for fire protection and in 1850 organized the Albemarle Engine Company for that purpose. His newspaper strongly supported the Democratic party and opposed Stephen D. Pool's Whig newspaper, the Old North State. On one occasion Starke attacked Pool with a cane, knocking him down. They exchanged "several blows" and Starke challenged Pool to a duel, but because of Pool's heavy indebtedness to creditors and the fact that he had a wife and six children, he rejected the encounter. In 1852 Starke was a delegate to the Democratic National Convention, which nominated Franklin Pierce as its candidate for president and North Carolina–born William Rufus King for vicepresident.

While editing his newspaper, Starke read law under William F. Martin and was licensed to practice by the North Carolina Supreme Court in 1858. In 1859 he disposed of his newspaper interests in favor of the law. President Pierce named him collector of the port of Elizabeth City and President James Buchanan renewed the appointment, but Starke resigned on the election of Abraham Lincoln to the presidency.

A vocal Secessionist, Starke anticipated military action. As colonel of the Third North Carolina Militia, he was ordered by Governor John W. Ellis to Cape Hatteras on the eve of the Civil War to take charge of troops to be sent there; he remained until further steps were taken to organize North Carolina troops. Entering active service on 17 July 1861, he was promptly placed in charge of the construction of a battery on Cobb's Point on the Pasquotank River for the defense of Elizabeth City. The local militia was called out and manned the battery under Starke's command. On 16 May 1862, with the rank of captain, he became assistant commissary of subsistence in the Seventeenth Regiment of North Carolina Troops, of which his former law instructor, William F. Martin, was colonel. Starke saw action at Wilmington, Kinston, New Bern, and various other points in eastern North Carolina, as well as with the regiment at Drewry's Bluff, Second Cold Harbor, Petersburg, and Bermuda Hundred in Virginia. He also served briefly as temporary acting adjutant general of General James J. Pettigrew's brigade but declined a permanent appointment to that post.

His bravery in action was often the subject of comment. In February 1864, while serving as acting brigade inspector, he was cited for his work with a select group of men in bridging the White Oak River in a single night. On another occasion, when he ordered his supply wagons to the rear and remained in the front to participate in the fight, he was described as the "fighting commissary."

On 8 Jan. 1855 Starke married Elizabeth Ferebee Marchant of Indiantown, Currituck County, and they were the parents of Eliza New, Emily Daugé, Elizabeth Marchant, Marian McMorine, and Gideon Marchant. During the war, when much of the coastal region of North Carolina was occupied by the enemy, Mrs. Starke and the children took refuge at Kittrell Springs in Granville County and in Franklinton in Franklin County. She died on 18 Apr. 1863, and on 8 Jan. 1868 he married Tabitha L. Pippen of Tarboro, Edgecombe County; they were the parents of Lucien D., Tabitha Pippen, Mary Mayo, Virginia Lee, and William Wallace. Starke recorded in his autobiography that he married his second wife on the anniversary of his first marriage because of his devotion to his first wife, nor did it escape notice that the first child of each marriage was born nine months and a few days after the wedding.

At the end of the war Starke, finding both his home in Elizabeth City and the residence at Indiantown occupied by Union forces, was obliged to live with relatives until the end of 1865. On Christmas Day 1867 he and his children moved to Norfolk, Va., where he established a law practice and in time was joined by two of his sons. He served in the Virginia legislature for two terms (1875–76 and 1876–77) and was president of the Landmark Publishing Company, publisher of the Norfolk Landmark. His funeral was held at St. Luke's Episcopal Church, Norfolk.

William A. Griffin, Ante-Bellum Elizabeth City: The History of a Canal Town (1970).