Frank Austin Smethurst, newspaper reporter, columnist, and editor, was born in Raleigh, the son of William Sidney and Martha Yearby Smethurst. His paternal grandfather was Sidney Smethurst, of Lancashire, England, who moved to Raleigh in the late 1850s. Sidney Smethurst owned and operated a foundry and, while disavowing any sympathy for slavery, used his ironworks to make weapons for the Confederacy. In retaliation, Union forces confiscated his business at the end of the war, and he became a machinist and master mechanic. 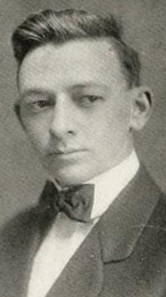 Frank Smethurst attended the public schools of Raleigh, where he was president of the literary society and senior class poet. He won a scholarship to Wake Forest College, achieved an outstanding record, and was assistant to the head of the English department. Nevertheless, near graduation in 1912 he was expelled for misconduct when he participated in an escapade prior to the spring dance that involved festooning campus trees with ribbons of toilet tissue. Unwittingly he and his confederates introduced a prank popularized generations later by exuberant students who called it "rolling" trees and who were seldom if ever reprimanded for the frolic. Years later, after he had become one of the state's foremost journalists, the college relented and awarded him a bachelor's degree.

After leaving Wake Forest, Smethurst worked briefly for the Charlotte News before joining the Raleigh News and Observer, to which he devoted the remainder of his life. He rose from reporter to city editor to managing editor, a post he held for seventeen years. For a long time he also wrote a column-length daily commentary, "In My Opinion," for the editorial page. This he used to accentuate the positive, to share the poignancy of both public joy and pathos, to heighten what little humor coursed through the wire service, and—more frequently than his competitors cared to admit—to focus on incipient news developments far earlier than other daily recorders recognized them as newsworthy. His commentaries on the controversial, particularly in politics, objectively and carefully presented opposing viewpoints that often exasperated both sides.

His columns frequently were reprinted and mimicked by other writers across the nation and led to his nomination in 1934 for a Pulitzer Prize. In a commentary captioned "Ella May Wiggins Doesn't Count," he decried the cavalier attitude of certain public officials towards a fatality growing out of textile strikes in the late 1920s. His nomination was endorsed by Haywood Broun, who editorialized on 1 Nov. 1929 that Smethurst's editorial "proves that the South is not the great desert pictured by Mr. Mencken."

After publisher Josephus Daniels accepted appointment as ambassador to Mexico in 1933, responsibility for the editorial management of the News and Observer was vested in Smethurst. Despite a deepening depression, he managed to increase circulation by tailoring successive editions each day to feature local news of special interest to the specific geographic areas in which the varying editions were distributed. Such specialized, localized news coverage was achieved by developing an extensive fraternity of regional correspondents reporting to the state editor.

While competitors struggled simply to survive the depression of the 1930s, Smethurst was laying the foundation for the most lucrative daily newspaper in the region. His unremitting demand for accuracy and excellence of writing style challenged and attracted ambitious young staffers who later distinguished themselves on many publications of national stature. Young writers whom he trained included E. Clifton Daniel and Marjorie Hunter, both later to rank high with the New York Times ; Jonathan Daniels, son of the publisher; James Daniel, later of the Reader's Digest staff; Simmons Fentress, of Time, Inc.; and Herbert E. O'Keefe, Charles F. Parker, Alonzo T. Dill, and J. G. de Roulhac Hamilton, Jr.

Though regarded as a raconteur of rare wit and warm conviviality, he preferred the role of recorder to that of the limelight. He declined all overtures for public office except one appeal in 1933 to serve as a public representative on the Veterans Administration economic review board.

In 1919 he married Margarette Lee Wood, a native of Danville, Va., and for a number of years woman's editor and author of a provocative daily column for the News and Observer. They were the parents of two sons, only one of whom, Wood, lived to maturity. In spite of deteriorating health, Frank Smethurst assembled a special staff and shared long hours of publishing the most voluminous News and Observer to that date, the 240-page seventy-fifth anniversary edition of 18 May 1940. A Baptist and a Democrat, he was buried in Oakwood Cemetery, Raleigh.