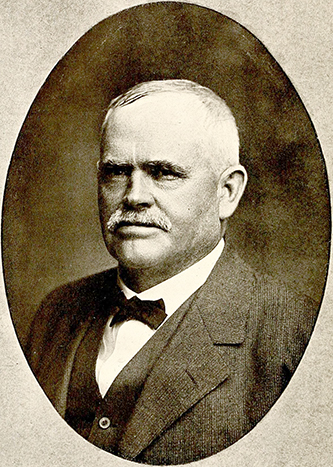 John Gilbert Shaw, lawyer and congressman, was born in Cumberland County, the son of Catherine Gillis and Colonel Duncan Shaw, a farmer. His Scottish grandfather, Gilbert Shaw, arrived in North Carolina in 1796. John G. Shaw attended the common schools and briefly operated his own turpentine business. From his youth he was "financially independent," owing to ownership of a thousand-acre plantation west of Fayetteville, which had a sawmill, gristmill, and cotton gin.

After studying the law in 1887, Shaw was admitted to the Fayetteville bar. He was almost immediately elected to the North Carolina legislature as a Democrat. One of the youngest members of the house, Shaw served on the Committee on Penal Institutions during his single term. He was Cumberland County attorney from 1890 to 1894 and a Cleveland presidential elector in 1892. In 1894 "The Plough Boy of Cumberland," as he was called in the local newspaper, was nominated for the U.S. Congress from the Third District. One of only two Democratic congressional candidates to survive the landslide Fusion election of that year, he defeated Populist Cyrus Thompson and Republican Oscar J. Spears. The campaign was very heated and twice Shaw's speaker's platform was torn down by political opponents. He failed to win reelection in 1896. In 1920 Shaw attempted a comeback in the Sixth Congressional District but lost the race.

Shaw played a key role in the location of Camp (now Fort) Bragg military base near Fayetteville. In 1918 Major General William J. Snow, the artillery chief for the army, sent Colonel E. P. King to the eastern United States to find a site for an artillery encampment. While in Fayetteville, King encountered Shaw, who gave him an extensive tour of a possible site west of the city. King was impressed and gave Snow a positive report. Shaw later performed much of the legal work required for the establishment of the camp, named in honor of the Confederate general Braxton Bragg.

Interested in local history and preservation throughout his life, Shaw was active in preserving the Scottish heritage of the Upper Cape Fear as well as in Civil War activities. The story on "The Oldest Road in Cumberland" appearing in John A. Oates's Story of Fayetteville was written by Shaw. Despite his historical and political undertakings, he was best known as a lawyer. After serving briefly as county attorney, he spent most of his legal career as a defense attorney. Shaw was proud that in no capital case that he argued was a defendant ever given a death sentence. On Law Day 1963 a portrait honoring his legal accomplishments was unveiled in the Cumberland County Superior Court.

In 1893 Shaw married Elizabeth Avery McPherson, the daughter of Captain John A. McPherson. They had four children: Gilbert and Duncan, both lawyers; John Alexander, a physician; and Sarah McNeill. Shaw, a Presbyterian, was a founder of the Highland Presbyterian Church. After several years of illness, he died in Fayetteville and was buried at the McPherson's Cemetery in Seventy-first Township.