Ralph James Scott, congressman, state legislator, and district attorney, was born on a farm in southeastern Surry County's Shoals Township, the son of Samuel Martin and Daisy Murphy (Cook) Scott. His four brothers were Arthur, Adam, Robert, and Paul Scott, and his half brother was Wallace Scott. At age nine, he moved with his family to Pinnacle in southwestern Stokes County, where he was graduated from high school in 1925. Scott chose to remain at Pinnacle High School for another year to play basketball and baseball, two sports in which he possessed exceptional talents. He then enrolled at Wake Forest College and studied law. Due to the lack of funds, he had to work his way through two years of undergraduate study and two years and one summer of law school before receiving an LL.B. degree and admission to the state bar in 1930. In September 1930 Scott began practicing in Danbury with John D. Humphreys, but their partnership was short-lived. Three months later, Humphreys, who had been elected a superior court judge in November, died unexpectedly. Scott continued to operate the law office, which was situated in a two-room wooden building across the street from the Stokes County Courthouse. With his wife, the former Verna Denny of Pilot Mountain, whom he married on 30 Nov. 1929, Scott raised two daughters; Patricia Ann (Mrs. William F. Southern of Walnut Cove) and Nancy Ellen (Mrs. Grady C. Shumate of Winston-Salem). 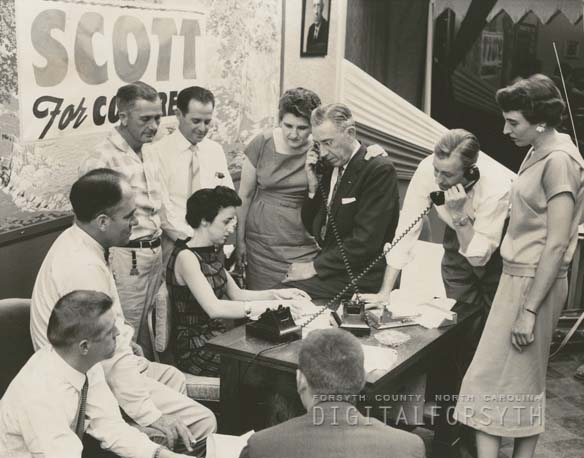 In 1934 Scott began a long political career with his election as chairman of the Stokes County Democratic Executive Committee, a position he held until filing for his first congressional race in 1956. Meanwhile, he won a seat in the North Carolina House of Representatives in 1936 and served in that year's special session, as well as in the regular and special sessions of 1937. Instead of seeking reelection in 1938, Scott opted to run for the district attorney's seat in the Twenty-first Judicial District, which comprised Surry, Stokes, Rockingham, and Caswell counties. Elected, he held the position until 1956, after winning reelection four times and facing opposition only once, in 1950. During his eighteen-year tenure as district attorney, Scott never missed a court date, nor was he ever late for work.

With two years remaining in his fifth term, Scott decided to seek the Democratic nomination for the seat of the Fifth Congressional District, which at that time represented Caswell, Forsyth, Granville, Person, Rockingham, Stokes, Surry, and Wilkes counties. He was elected to the Eighty-fifth Congress after defeating four-term incumbent Thurmond Chatham, who had refused to sign the Southern Manifesto. Scott's congressional career endured until 1967, when he chose not to seek a sixth term and returned to Danbury, despite pressure to run again. After each term, Scott had wanted to leave Washington, but his friends and political aides always coaxed him into seeking reelection. Scott, a political conservative, often claimed that his thinking did not correspond with "the trends of the time" and because of this, he felt that he was not accomplishing much as a legislator.

After returning to Danbury, Scott worked as an assistant district attorney for the Seventeenth Judicial District, which served Surry, Stokes, Rockingham, and Caswell counties. He also was active as a Mason, Shriner, Moose, Elk, and member of the Pinnacle Baptist Church. Fearful that Stokes County officials might move the county seat, Scott donated most of the land for a new government center in Danbury. His benevolence paid off and the county seat remained intact.

After suffering a stroke in 1979, he decided to retire in October 1980. But Scott could not stay away completely. In 1981 he served as temporary district attorney for several weeks. At age seventy-seven he died at Forsyth Memorial Hospital after suffering another stroke and a series of heart attacks. He was buried in the Pinnacle Baptist Church cemetery.