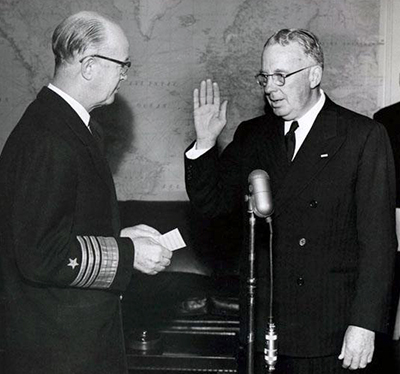 Richard Thurmond Chatham, U.S. congressman, industrialist, and philanthropist, was born in Elkin, Surry County, the only son of Hugh Gwyn and Martha Lenoir Chatham. His grandfather was Alexander Chatham, founder of Chatham Manufacturing Company. Chatham was educated in the public schools, at Woodberry Forest School in Orange, Va., at The University of North Carolina (1915–16), and at Yale University (1916–17). He left college in 1917 to enter the U.S. Navy as a seaman, serving during World War I until discharged as an ensign in June 1919.

In July 1919, Chatham began work with his father's textile mill, Chatham Manufacturing Company, the world's largest manufacturer of blankets, in Winston-Salem. After serving as treasurer of the company, he became president in 1929 and chairman of the board of directors in 1945. His term as president was characterized by rapid expansion in capacity, variety of products, and profits. He served as a member of the North Carolina Board of Conservation and Development in 1938 and was president of the North Carolina Dairymen's Association.

During World War II, Chatham served in the U.S. Navy (10 Feb. 1942–25 Nov. 1945). He worked with the Bureau of Ordnance and the office of the secretary of the navy and then was assigned to combat duty in Europe and the Pacific theater. He attained the rank of commander in the U.S. Naval Reserve and was awarded the Bronze Star Medal, the secretary of the navy's Commendation Medal, the Royal Order of Nassau with Swords (from the Dutch government), and numerous battle stars and theater ribbons. After the war he founded a magazine called the Navy Bulletin (later Armed Forces) and operated it at a loss for five years.

With his only previous political experience being service as a county commissioner in Forsyth County, Chatham was unsuccessful in a 1946 attempt to win the Democratic nomination to the Eightieth Congress from the Fifth Congressional District. As a member of the Democratic party's National Committee on Finance during the election of 1948, he was an active supporter of President Truman and a substantial contributor to the party. He was elected to the Eighty-first Congress in 1948 and to the three succeeding Congresses (3 Jan. 1949–3 Jan. 1957). While in Congress, he was a member of the House Foreign Affairs Committee and was an advocate of a vigorous internationalist policy. He favored U.S. recognition of Red China and supported the Marshall Plan. He lost his seat in Congress in 1956 to Ralph J. Scott, primarily because he refused to sign the "Southern Manifesto," a document that pledged opposition "by all legal means" to the U.S. Supreme Court's 1954 decision outlawing segregation in public schools. Most of Chatham's southern colleagues in Congress signed the manifesto, and in North Carolina, Harold D. Cooley was the only non-signer to win renomination.

Chatham was a trustee of The University of North Carolina and of Woodberry Forest School; a member of the National Association of Manufacturers, until he resigned through unwillingness to accept its reactionary policies; president of the Winston-Salem Chamber of Commerce; and a member of the National Association of Wool Manufacturers, the American Legion, and the Veterans of Foreign Wars. His clubs included the Metropolitan Club and the Army and Navy Club in Washington, D.C., and the Racquet and Tennis Club in New York City. He was awarded an honorary Doctor of Textile Science degree from North Carolina State University in 1948. His religious preference was the Methodist church, and he belonged to Delta Kappa Epsilon Fraternity.

On 28 Oct. 1919, Chatham married Lucy Hodgin Hanes. Two sons were born to this marriage, Hugh Gwyn II and Richard Thurmond, Jr. After his first wife's death, Chatham married Mrs. Patricia Firestone Coyner, on 16 Nov. 1950. One son, Walter Firestone, was born to them. Chatham died in Durham and was buried in Salem Cemetery in Winston-Salem. In his final will, his estate was valued at almost $2,000,000. He left $250,000 to a charitable trust, the Chatham Foundation, set up for the education of worthy young people.