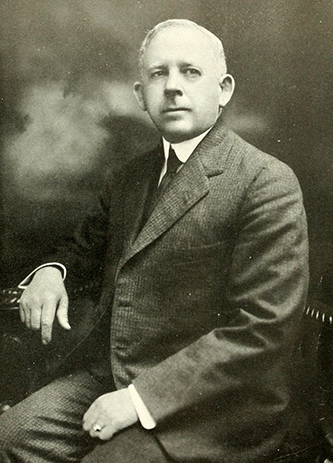 Hugh Gwyn Chatham, industrialist, public servant, philanthropist, and promoter of various enterprises, was born in Elkin of English and Welsh ancestry. He was the eldest son of Alexander and Mary Elizabeth Gwyn Chatham, who later had two other sons, Richard Martin and Paul. Hugh's forebears were large landholders and active participants in public affairs. His grandfather, Martin Chatham, had a farm near Wilkesboro and operated a foundry and machine shop in the town; he served as a trustee of the Wilkesborough Seminary in the 1830s. His great-grandfather, James Gwyn, married Martha Lenoir who figured with her father, Thomas Lenoir, in the revolutionary annals of the Carolinas; their son, Richard, who was born at the Green Hill Plantation near Ronda, was at one time a member of the state legislature and was active in county affairs. Alexander Chatham came to Elkin as a young man and was employed by Richard Gwyn, who operated a large farm, a mercantile business, and a cotton mill known as the Elkin Manufacturing Company; Chatham married the daughter of Richard Gwyn in 1862.

Hugh Gwyn Chatham was born on a plantation on the present site of Elkin. He attended public school there, was graduated from Jonesville High School, across the river from Elkin, and spent two years in Vanderbilt University. He then returned to Elkin and became his father's assistant in the blanket factory that Alexander Chatham and Thomas L. Gwyn had opened in 1878, where he had played and worked as a boy. This firm, Gwyn and Chatham until Gwyn sold his interest in 1890, was purchased by Hugh and his brothers. The name of the business was changed to Chatham Manufacturing Company; Hugh became an executive and when his father retired as president, succeeded him. The mill in its original location was operated by water power and was at a remote distance from the railroad. Early in Hugh Gwyn Chatham's presidency, a site accessible to the railroad was chosen. In 1906 another mill was built in Winston-Salem, where it was a factor contributing to the city's growth as a manufacturing center. Chatham moved his residence to Winston-Salem and lived there many years.

During World War I, Chatham was a member of the Council of National Defense, and his duties took him to Washington frequently. Both plants of the Chatham Manufacturing Company were commandeered by the government, with Chatham as superintendent, and great quantities of blankets were produced for the armed services.

Chatham served on the executive committee of the board of directors of the Wachovia Bank and Trust Company. He was president of the North Carolina Railroad Company under Governors Charles B. Aycock and Robert Glenn and also president of the Elkin and Allegheny Railroad Company. In 1914 he was elected a member of the state senate. Largely through his efforts, Roaring Gap became beautifully established as a summer colony.

Chatham was married in 1894 to Martha Lenoir Thurmond of Ripley, Miss. They had two children, a son, Richard Thurmond, and a daughter, DeWitt. Richard Thurmond succeeded his father as president and chairman of the board of Chatham Manufacturing Company and served his district in Congress for two terms. DeWitt married Ralph P. Hanes, a prominent businessman of Winston-Salem.

Chatham was a Methodist, a Democrat, a Mason, and a member of the Knights of Pythias and of the Junior Order of United American Mechanics. He was buried at Elkin. When the first hospital was opened in Elkin in 1931, it was named the Hugh Chatham Memorial Hospital; a portrait of him hangs there. The Hugh Chatham Memorial Bridge across the Yadkin River was opened in 1933.