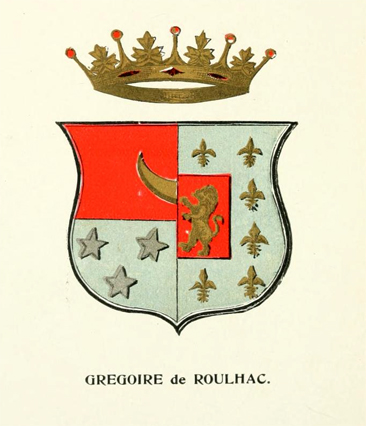 Psalmet Grégoire de (or Roulhac de Thias Roulhac, Psalmet Grégoire de), French immigrant and farmer, was born at Limoges, France, the second child and second son of Joseph Grégoire de Roulhac de Thias and his wife Marie Jeanne Dumas de la Vaille. His father came from a family of merchants and his mother, from nobility. Married in 1750, Joseph and Marie had nine sons and four daughters. Though Joseph was the second son, he inherited by right of primogeniture half of the property of his father because of the death of his older brother. The family was well-to-do and well educated. A good student and a distinguished lawyer, Joseph became regulator of the police and was for many years the mayor of Limoges. He saw that there would be advantages attached to nobility for his children, so he bought offices and thus "purchased" nobility. In France among people who pretended to any gentility a second surname was given to distinguish a man from his brothers; thus "de Thias" was added to Joseph's name as well as to Psalmet's.

Convinced that a good, solid education would make up for the small amount of property that he could leave his younger children because of the law of primogeniture, Joseph employed a well-educated tutor. Psalmet's early life was sheltered in a strict household with hours of study and play enforced, although not severely. At the usual age Psalmet went away to school, and when his collegiate training at Notre Dame de Grace ended, he entered the Congregation of the Oratoire and later became a professor of belles lettres.

As the second son, Psalmet was entitled to only a small share of the family money. With the onset of the American Revolution the mercantile class in France saw a new market, and many commercial houses in the seaports engaged in business speculation, among them a Bordeaux company with a strong credit rating, a good reputation, and ties to citizens of Limoges. Rainbau, Barmarin, and Company invited Psalmet to become its agent and partner, with a plan to form a house under the name of Roulhac, Barmarin, and Company in America. The prospect seemed advantageous to a young man with limited means, so the elder Roulhac encouraged Psalmet to accept, thinking that his success would provide opportunities for the younger brothers later on. Psalmet decided that he should investigate the situation before making a full commitment, and he arrived in Boston on 20 Apr. 1777 prepared to sign the articles of copartnership sent him from France should he deem the enterprise a reliable one. Once in America, he saw that such an act would involve him irrevocably, and he refused to sign. Many cargoes from France were consigned to him as an agent, but ships were often taken at sea by British cruisers or they put in at the first American port they could enter, leaving their cargoes in the care of undependable agents. This led to the failure of the firm, which asserted to its creditors that Roulhac as their agent had become rich. The truth was that he was reduced to beggary.

As early as February 1776 one privateer was being fitted out in each of the towns of Wilmington, New Bern, and Edenton, and later others were equipped by several merchants, North Carolina privateers, to harass British commerce and capture needed supplies. Roulhac was listed as one of the owners of the brig Rainbeau, and his liabilities as a result of his business connections followed him for some time.

His health impaired and the money advanced him by his father nearly gone, Roulhac purchased a small tract of poor land in Beaufort County and arranged with a Dr. Savage in Richmond to sell dry goods and groceries on commission. A party of Tories in the neighborhood, knowing that he was French with sympathies for the opposition, raided his business, bound him and his clerk, and stole all his goods, money, books, papers, and even the clothing worn by the men. The militia later recovered most of the belongings except the money. The law provided that claims made on lost certificates be processed. Roulhac went from committee to committee, all reporting in his favor, but no law required that payment be made and after ten years the claim was sold. A few days after the incident with the Tories, his younger brother John (Jean-Baptiste Ignace Grégoire de Roulhac—the sixth child of the family) arrived, having had reports that Psalmet was a wealthy man. Psalmet was surprised by the visitor; not recognizing him and having reason to look with suspicion on strangers, he ran for his gun. John had received a part of his paternal legacy and had obtained passage on a French frigate as a supernumerary midshipman. Unused to the English language and work habits, he had planned to go to sea; however, with Psalmet's help and while living with him he began to study English, then read law and obtained his license.

An enlightened, generous, and liberal man, Psalmet had more of the vivacity belonging to the French than did the other brothers who came to America (John and Francis). His difficult experiences were made more tolerable by his lightness of heart, gaiety, and cheerfulness.

On 17 July 1783 Psalmet and Anne Hare Maule were married at Smith's Point on the Pamlico River. The Maule family, which owned land and slaves, gave the Roulhacs one hundred acres. But their life provided them with little beyond the essentials, and Roulhac wrote to his mother that "necessity obliges me to content myself with very little." Frugality made it possible for them to acquire a house, which was originally an old fort on Pamlico Sound, built of bricks brought from England in 1721. Called The Hermitage, it was a few miles from the town of Bath in Beaufort County. The Roulhac home was a resort, often an asylum for unfortunate Frenchmen when they first came to America. In letters to France, John wrote of teaching Psalmet's wife, Anne, to read. Anne's brother, Moses Maule, lived with the family; he was a wealthy and hospitable man, who on his death left the greater part of his property to his sister's children.

In France Psalmet's oldest brother, Guillaume Grégoire de Roulhac de la Borie, having inherited a fortune from his father and uncle and married to a wealthy heiress, now bore the responsibility for the rest of the family. The coming of the French Revolution reduced his fortunes considerably and resulted in the temporary confinement of him and some other members of the family as prisoners. The family fortunes were restored to some extent under Napoléon I. The bulk of the Roulhac family was against the French Revolution, but Psalmet and John were great admirers in the hope that it would be better for the French nation.

He became a candidate for the legislature but was defeated when the influential Blount family opposed him, largely because he was foreign, a fact that he was never able to forgive. His oldest daughter, Elizabeth, at age seventeen, married James Blount, a member of the hated family.

Never a very robust man, Roulhac was subject each fall to long attacks of fever, and these sapped his strength. He died of a violent attack of influenza during the U.S. epidemic of that year.