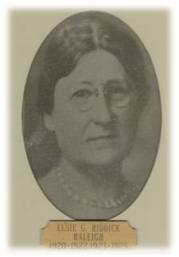 Elsie Garnett Riddick, politician, suffragist, and advocate of woman's rights, was born on her father's farm six miles from Gatesville, the daughter of David Elbert and Cornelia Ann Speight Riddick. After attending the local schools, including a co-educational private academy in Gatesville until age fifteen, she entered the Normal and Industrial College for Women in Greensboro. With limited help from her family, she worked her way through college by setting tables and washing dishes. Because of her proficiency in spelling and arithmetic, she was enrolled in the business department and was graduated in 1895. Although few businesses at that time employed women as bookkeepers or secretaries, she found summer employment with the Greensboro Lumber Company. At the end of the season she returned home and was employed at the local high school in nearby Winston to teach "business subjects."

In 1897 a female stenographer with the North Carolina Agricultural Commission in Raleigh resigned after a black man was hired to distribute fertilizer tags. With the help of politicians and friends in both political parties, Elsie Riddick was named stenographer to the commission. Boardinghouses in the area refused to rent a room to a single woman who worked all day "with no one but a man," so she roomed with her uncle, Wallace C. Riddick, professor and later president of North Carolina State College. After two years she became secretary to the North Carolina Corporation Commission, a position she held for fifteen years. Her pay during these years in Raleigh was consistently $30 a month. She next became assistant executive secretary of the commission, and when she retired in 1949 as chief clerk, she concluded fifty-two years of service.

In January 1917 she attended a meeting of sixty-two women who formed the Equal Suffrage League of Raleigh. At that first assembly she was elected secretary of the league; a month later she became president and was named a delegate to a state convention meeting in Greensboro on 27 January. In March 1920 the women in Raleigh, Riddick among them, made their first move into politics. Without warning on the evening of the twenty-seventh, groups of women showed up at all the Democratic precinct meetings in the city and read statements demanding that they be allowed to participate in the gatherings. Riddick read a statement in her precinct saying that since thirty-five states had ratified the Nineteenth Amendment "and it is a certainty that we will vote in the next election . . . we have [the] right, therefore, to vote in this precinct meeting—just as any young man would who will become twenty-one years old prior to the next election." The tactics of the women succeeded.

As a reporter from the Raleigh News and Observer (28 Mar. 1920) declared, "The unexpectedness of the stroke gave the male Democrats no time to formulate any answer to the claims of the women to recognition." Six days later Riddick was one of the five women in Raleigh named as a delegate to the Democratic state convention.

Pleased with their success, Raleigh women tried again. In June 1920 Riddick and a small group of prominent women (including Mrs. T. W. Bickett, wife of the governor, and Dr. Delia Dixon-Carroll) consulted with some of the "leading men" of Raleigh as to the legality of going to the precincts and demanding to be registered. They hoped, if the Nineteenth Amendment passed, that women would be in a position to vote in the coming election. The amendment passed and as they had done before, the women made their plans in secret and descended on the unsuspecting registrars. Riddick later recalled: "Just as we arrived, we women stepped up. . . . We told them why we were there. They were so surprised they could not turn us down." Not long afterwards, Riddick was made chairman of her precinct, the first woman in Raleigh to hold that position. In later years she served as vice-chairman and then chairman of the Wake County Democratic Committee, secretary to the Democratic state committee, and a delegate to the Democratic National Convention in 1924.

At about the time Riddick became involved in politics, the National Business and Professional Women's Association was organized in St. Louis. North Carolina sent several women to the convention in 1919, but Riddick was not among them. The reason was that the association did not consider her a professional because she was a stenographer. Similarly, Riddick was not invited to the local organizational meetings in Raleigh, though upon application, the local organization later admitted her. Evidently, her leadership ability gained her respect and friends for, upon the resignation of the local president, she was elected to that post. At the September meeting of the state organization in Greensboro, Riddick was elected vice-president and she later succeeded to the presidency.

Throughout the 1920s she organized local associations around the state and lectured on her concern for rising young businesswomen, good government, international peace, and moral standards. In addition, she lobbied for the construction of a dormitory for women at Chapel Hill, an end to "the discrimination shown to the unaccompanied woman by the hotels," the creation of a women's bureau in the Department of Labor, and the founding of a loan fund to help young businesswomen. In response to this last concern, the Greensboro chapter of the National Business and Professional Women's Association created the Elsie Riddick Loan Fund in October 1924 to help finance business training for young women.

During this decade she served again as president of the state association and twice as vice-president of the national organization. She also was selected as one of the organizers of an association tour of six European countries. The group consisted of sixty association leaders who hoped to interest women abroad in forming similar organizations. Riddick presided at a meeting in Paris and managed to get a small organization started. She later remarked that the other countries "took lots of literature" and formed organizations later.

Despite her success as a leader in women's organizations and Democratic politics, Riddick did not advance in her business career. In 1921 she told the state convention that women should try to be more efficient and to equip themselves better for their work "and thus be in a position to demand higher things and larger rewards for their work."

Following her own advice over the next dozen years, by working quietly and efficiently as the assistant clerk of the Corporation Commission, she took on more responsibility in preparation for a better position. In late October 1933 she made her bid for that higher position. After receiving the thanks of several prominent Democratic politicians in the state for getting out the women's vote in Wake County that fall, Riddick and her friends launched a campaign directed by Lona Glidewell, superintendent of public welfare in Reidsville, to secure for her the post of chief clerk of the North Carolina Utilities Commission, which was slated to replace the old Corporation Commission. By this time Riddick was considered to be one of the best accountants in the state and an expert on North Carolina tax law. She had the backing of the club women of the state as well as some prominent Democratic politicians, including Senator Josiah Bailey. The incumbent chief clerk, R. O. Self, was said to be "no slouch of a politician" himself. Self and his friends began a letter-writing campaign of their own, which led the Raleigh Times to predict that the matter would have to be resolved by Governor J. C. B. Ehringhaus.

Stanley Winborne, head of the commission, told Riddick's supporters that he intended to keep Riddick in her present position. He contended that, because of the depression, the chief clerk's position had to be merged with the job of director of Truck and Bus Operations, which by law required a person experienced in these matters, which Self was. But aside from these technical requirements, Winborne implied that the job would be too much work and too difficult for Riddick: "Due to [the] lack of finances, this State had placed quite a burden on the Chief Clerk and it is a very difficult position to handle. The clerical work is a very small part of it." To Winborne, Riddick would always be a secretary and would never be capable of holding an administrative post. In late January, when it became apparent that the pressure had not been sufficient to secure the job for Riddick, her friends tried to get her salary increased. They claimed that, with the depression on, her salary was 56 percent below the 1930 rate while "others in the same department were out only forty per cent." In this effort Riddick and her friends met with some success, although they did not get her salary restored to the same rate as her coworkers.

Riddick's own words written in the September 1922 issue of Tar Heel Banker had come back to haunt her. She had complained then that businessmen hired many women as secretaries but trained them for higher work and required them to do that work without receiving the title or pay to which they were entitled. It was not until 1949, just three months before her retirement, that Elsie Riddick was appointed chief clerk of the Utilities Commission.

In December 1925 the state named Riddick a delegate to the Pan American Commercial Congress in New York City, and in March 1926 she was made an honorary member of the American Woman's Association, the first from North Carolina. She became president of the North Carolina League of Women Voters in 1930 and was appointed secretary to the Raleigh Civil Service Commission in 1935 and 1938. She belonged to the Daughters of the American Revolution, the Women's National Democratic Club, and the Baptist church. In 1955 she retired to Gatesville, where she spent the remainder of her life and where she was buried.