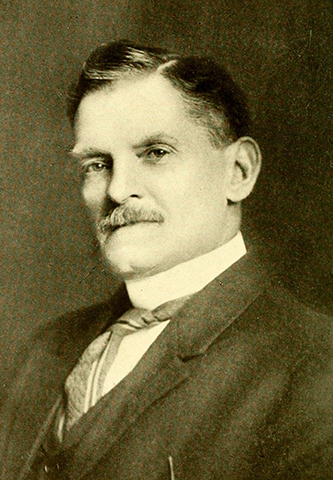 John Turner Pullen, banker, philanthropist, author, church founder, and lay preacher, was born in Wake County, the son of Nancy A. (ca. 1828–31 Aug. 1888) and James D. Pullen (ca. 1820–15 Nov. 1887). His paternal grandparents were Elizabeth Smith (ca. 1792–25 May 1862), sister of early Raleigh merchants Richard and Benjamin Smith, from whose estates some of Pullen's inherited fortune eventually came, and her husband Turner Pullen (ca. 1780–21 Dec. 1867), sheriff of Wake County from 1823 to 1825 and justice of the Wake County Court from 1818. His father's brother was Richard Stanhope Pullen (18 Sept. 1822–23 June 1895), who donated Pullen Park to Raleigh and to the state gave the campuses that became North Carolina State University in Raleigh and (with R. T. Gray of Raleigh) the University of North Carolina at Greensboro.

John T. Pullen never married. He began his business career as clerk and then teller for the State National Bank in Raleigh. At the time he had the reputation, according to a contemporary, of being "the best field-shot in Raleigh, if not in the state, and one of the best at pool." He led what some termed a dissolute, intemperate, even "wild" life, although a close acquaintance later described him as merely "self-indulgent, rather than really bad." At some point he had become a member of the First Baptist Church, but in November 1881 that congregation in conference cited him to attend the next monthly conference "to answer to the church for unchristian like conduct towards the church in that he declined to conform to a rule of the church." Following his satisfactory hearing on 2 December, his life-style apparently changed completely, and he became known for his constant acts of charity and encouragement to the poor, the old, and those in prison. Now an active member of the church, he was elected an usher less than a year later and became both chairman of foreign missions and church clerk in 1883. The latter position he held until December 1884, when he organized the church's second mission church (the first was Raleigh's Tabernacle Baptist, formed in 1874) as the Third Baptist Church on South Fayetteville Street near the railroad crossing.

The new church, called by Senator Josiah W. Bailey "the happiest spot in Raleigh" because "the poor felt at home there in a degree that they could not feel in any other," relocated in 1892 to the corner of South and Fayetteville streets. It was then renamed the Fayetteville Street Baptist Church, although among Raleigh citizens it was almost universally called "John Pullen's church." He served on its first board of deacons, was superintendent of the Sunday school for the rest of his life, and, especially during intervals between regular pastors, served as lay preacher. At least once he personally paid a sizable remainder of the building debt. Immediately after his death, the congregation voted unanimously to change the name to the Pullen Memorial Baptist Church.

Similarly, when "John Pullen's bank" was mentioned, most residents of Raleigh knew the reference was to the Raleigh Savings Bank, organized in the mid-1880s, of which Pullen was the first cashier and eventually (ca. 1900) president. Josephus Daniels marveled, "He devoted more time to going into the homes of the very poor and the submerged and the wicked than to his bank. He never thought that his religion was helping the bank, but people had such confidence in him that widows and many others who had a few pennies they wished to save, would deposit their money in 'John Pullen's bank.'" A close friend, Dr. Clarence Poe, called him "virtually a one-man Salvation Army," declaring that of all his friends Pullen was the one who "most nearly deserved to be called a saint."

For three decades Pullen taught and was in charge of regular Sunday school classes at Central Prison. During part of that time he issued a magazine-type publication that he sent to prisoners all over the United States. In 1893 he helped organize St. Luke's Circle, an organization that provided housing for elderly women. He paid the rent for a succession of residential buildings for the women until they acquired their own house on South Street, prior to the construction of St. Luke's Home. From 1899 to 1913 he was the "mainspring," wrote a local reporter, "for an annual New Year's Day dinner at his church" for "the old people of Raleigh." In his will he left funds for continuing "the annual Old Folks Dinner," a bequest of $3,000 to St. Luke's Home, and another sum to provide "a weekly supper for the old ladies [there] such as I have been accustomed to have with them."

Pullen left a thousand dollars with his friend Livingston Johnson "to be used by him in giving away little books of the Bible." These, and small picture cards containing verses of scripture, Pullen was seen constantly to be handing to children, for whom his pockets also always bulged with candy and other treats. He was among the earliest contributors to the Methodist Orphanage in Raleigh at the time of its 1899 opening, and he was on a local chamber of commerce committee to raise funds for its support. Provision for the Methodist Orphanage and for the Thomasville Orphanage was made in his will.

Also provided for was Meredith College, with which he was associated from the time of its construction on the site that had been his home. He was among those who gave chapel talks, and he was a trustee from 1901 until his death, serving also as treasurer of the board. He personally underwrote tuition costs for some disadvantaged students and frequently visited the parlor and dining room of "the Club," a special self-help dormitory, after bringing "a treat of shad, steak, oysters, or chickens, with ice cream for dessert," according to one early alumna. "Kind Mr. Pullen" also provided money for carpeting their hall and stairway and lighting their parlor with gas.

Rex Hospital also benefited from his largesse. One of his last direct monetary gifts was made to its nurses' home and a sizable bequest was included in his will.

In the late 1890s Pullen helped organize a mission Sunday school in the village near Caraleigh Cotton Mills that developed into the Caraleigh Baptist Church, constituted in 1904. He was for some years a member of the home missions board of the Baptist State Convention. In addition to delivering sermons as a lay preacher, he was the author of several published commentaries on scripture, including What Saith the Scripture? and Scripture Comments (1900), and Prayer and Its Answers from the Word of God ; the latter two works were reprinted in several editions by Clarence E. Mitchell, publisher, in the 1920s and 1930s.

For the last years of his life Pullen resided in the home of his niece and her husband, Kate Belvin and John William Harden, at 1519 Hillsborough Street, where he died after a short illness. On the day of his funeral at "his" church and his burial in Oakwood Cemetery, the banks and many local stores closed, factories shut down and silenced their whistles so that workers could attend the services, the Seaboard Railroad shops closed at noon to permit workmen to be present, and the state penitentiary permitted a representative group of prisoners to lay a wreath on his coffin. Three special streetcars transported children from all the Sunday schools of the city to the cemetery. The Raleigh Times and the News and Observer printed special articles about "the best loved citizen in Raleigh" every day for the unprecedented period of nearly two weeks. The Raleigh Baptist Association and the State Baptist Convention later published resolutions of tribute. A prominent member of the predominantly black First Baptist Church, Wilmington Street, Spanish-American War colonel James H. Young, noted that "the colored people, as well as his own race, [had] received unbounded favor and encouragement at [Pullen's] hands" and that he was "the friend of all people." A fellow banker and civic leader, Joseph G. Brown, recommended for his tombstone inscription, "Here lies John Pullen, who loved everybody and whom everybody loved." A local editorial declared, "Raleigh may not have had her greatest or wealthiest man as yet but she has had her best man."