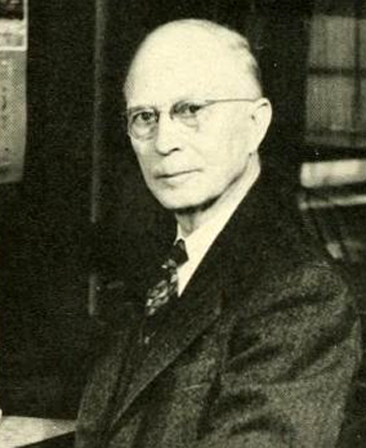 William Frederick Prouty, geologist, university teacher, and administrator, was born on a farm near Putney, Vt., the third living child of Charles Eaton and Corintha Walker Prouty, both of English descent. After finishing the grammar grades in the Putney school, young Will Prouty left home at age fourteen to complete his preparatory schooling at Black River Academy at Ludlow, Vt., before entering Syracuse University at Syracuse, N.Y., where he lived in residence with his uncle and aunt, Mr. and Mrs. Frank Robinson Walker. Walker, a practicing attorney, later became head of the law school at Syracuse University. Prouty received his B.S. degree with honors in geology at Syracuse in 1903 and his M.S. in 1904, when he was also an instructor of geology.

After serving as assistant on the Geological Survey of Maryland during the summers of 1903 and 1904, Prouty entered Johns Hopkins University, from which he received a Ph.D. in 1906. Later that year, he accepted a position as associate professor of geology and mineralogy at the University of Alabama at Tuscaloosa, where he became head of the department in 1911. In addition to his teaching duties at the university, Prouty served as chief assistant geologist of the Geological Survey of Alabama, for which he compiled mappings in the vicinity of Birmingham that were largely instrumental in the discovery and later development of a thick iron seam; the utilization of its rich ores was of great significance in making that city the steel center of the South. During these years, he also did consulting work in Georgia, Tennessee, and Maryland, where his studies dealt largely with the availability and quality of iron, coal, graphite, and marble deposits. Prouty's extensive work with marble later established him as one of the country's leading experts on marble.

By the end of World War I, Professor Fred Prouty had determined to concentrate on teaching, his first love, despite the many opportunities offered him as a free-lance geological expert and oil prospector. Thus he became a dedicated teacher who prepared many of his students to become prominent in their fields of geology, both in this country and abroad. In 1919 he accepted a post at The University of North Carolina as professor of stratigraphical geology. Upon the death of Dr. Collier Cobb in 1932, he was named head of the Geology Department, a position he retained until his sudden death in 1949. From 1920 to 1924 he also was geologist for the North Carolina Geological Survey, and from 1922 to 1925 he served as paleontologist with the West Virginia Geological Survey. In 1938 he was named geologist on the Board of Consultants of the Tennessee Valley Authority, where he remained active until he died.

During World War II Prouty originated and supervised the teaching of map courses for the students of the V-12 ROTC units at Chapel Hill. For this work he received full recognition from the service officials on location and in Washington, as well as many letters of appreciation from his former students then overseas.

Prouty was the author of numerous articles appearing in scientific journals from 1907 to 1952, including a definitive work on a controversial subject, the "Carolina Bays and Their Origin," published posthumously in the Bulletin of the Geological Society of America (vol. 63, 1952), in which he established his modified meteoritic (air-shock wave) theory for the origin of the bays, a great many of which (such as those at White and Waccamaw lakes) appear throughout the coastal plain of North Carolina.

Prouty was a Fellow of the Geological Society of America and a member of the American Society for the Advancement of Science, Society of Economic Geologists, American Institute of Mining and Metallurgical Engineers, Seismographical Society of America, American Geophysical Union, American Meteorological Society, North Carolina Academy of Science, Elisha Mitchell Society, Carolina Geology Society, Phi Beta Kappa, Sigma Xi, Gamma Alpha, Phi Kappa Phi, Sigma Gamma Epsilon, Phi Delta Theta, the Order of Gimghoul, and the Rotary Club. He was a communicant of the Episcopal Chapel of the Cross in Chapel Hill and was a political independent. He died of a heart condition at Watts Hospital in Durham and was buried in the old Chapel Hill Cemetery.