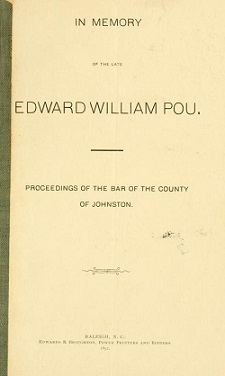 Edward William Pou, Reconstruction politician and legislator, was born in Orangeburg District, South Carolina, the oldest son of Joseph and Eliza Margaret Felder Pou. The Pous and the Felders had lived in South Carolina since the 1730s, but in 1834 Joseph Pou moved with his family to Talbotton, Ga., where he practiced law, eventually forming with Levi B. Smith the partnership of Smith and Pou. Edward W. Pou was graduated from the University of Georgia in 1851 and joined his father's law practice soon afterwards. About 1854 he married Lucy Carter, of Talbotton, by whom he had one child, Arthur, who subsequently altered the spelling of his surname to Pew. Upon the death of Lucy Carter Pou in 1858, Pou married in December 1859 Anna Maria Smith, daughter of the late James Hinton Smith and Nancy B. Smith of Tuskegee, Ala., but formerly of Johnston County, N.C.

At the opening of the Civil War, Pou accepted a commission in "Stephens' Rifles," Georgia militia, in July 1861 but seems to have had a short military career. By 1862 he was back in Tuskegee practicing law and attending to family affairs. His business ventures during the war years included a tannery operation (Persons and Pou) and niter production at Auburn, Ala., for the Confederate government. He continued his law practice in Tuskegee until the close of 1866, when Pou moved with his wife, children, and mother-in-law to her property near Smithfield, N.C. To further his practice of law in the state, he secured letters of introduction to the members of the North Carolina Supreme Court and to Bartholomew Figures Moore.

As a young man, Pou had belonged to the Democratic party in Georgia. Some of his friends and relatives were surprised, therefore, when he announced in postbellum Alabama that he had favored emancipation before the Civil War and would have said so at the time had freedom of speech really been possible in the antebellum South. By May 1866 Pou seems to have won the confidence of the freedmen in Macon County, Ala., and these trends consistently characterized his political career in North Carolina. In April 1867 he addressed the Johnston County freedmen at Smithfield, urging them to support the National Republican party as the party that could, through compliance with the congressional Reconstruction acts, carry North Carolina back into the Union. In July of that year Pou attended the Union League's monster Fourth of July celebration in Raleigh and was one of the delegation appointed that day to go to Washington and secure Governor Jonathan Worth's removal from office.

In August 1867 Pou was elected a delegate from Johnston County to the Republican state convention and was subsequently elected a Republican representative from Johnston County to the 1868 and 1869 General Assembly. He was one of the trustees for the university newly appointed by Governor W. W. Holden under the constitution of 1868. After Holden was removed from office and his newspaper, the Standard, came to an end, Tod R. Caldwell and other party leaders consulted Pou in July 1871 on the feasibility of merging the Carolina Era and the Telegram to form a new Republican party organ (Pou having cast his support with the branch of the party rallying around Caldwell rather than Judge Thomas Settle and the friends of Holden). In the following spring Pou was one of those who joined with H. H. Helper and Daniel R. Goodloe in organizing the Liberal Republican party during the administration of Ulysses S. Grant. Consequently, in the presidential campaign of 1872, Pou campaigned for the Liberal Republican candidate, Horace Greeley, in Mitchell, Madison, Henderson, Polk, and Rutherford counties. Sometime after this campaign ended in Grant's reelection, Pou gave up politics altogether and by the early 1880s he had returned to the party of his youth as a Cleveland Democrat.

[title page]. In memory of the late Edward William Pou : proceedings of the Bar of the county of Johnston. Raleigh, N.C.: Edwards and Broughton Company. 1892. 1.https://archive.org/stream/inmemoryoflateed00edwa#page/n2/mode/1up (accessed October 7, 2013).