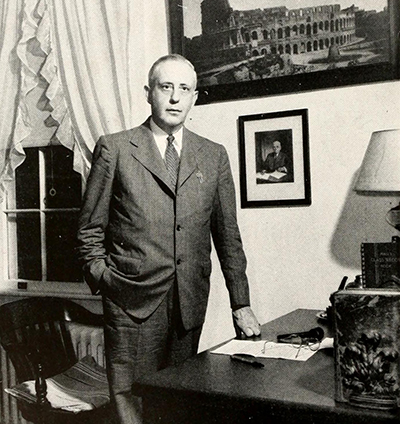 Hubert McNeill Poteat, college professor, musician, author, and Shriner, was born at Wake Forest to William Louis and Emma James Purefoy Poteat. His early education was eclectic, and his principal instructor was his maternal grandmother, who operated a private school. The fundamental knowledge he received through her tutoring enabled him to enter Wake Forest College, from which he received the A.B. degree in 1906. Serving as instructor in Latin at the college for the next two years, he also earned the A.M. degree (1908).

While a student at Wake Forest, he developed interests that would dominate his later life. Study of the classics led to a doctorate. His proficiency in music was considerably advanced. Although he studied the violin, he did not often play this instrument, much preferring the organ. By 1905 he was ready to play at the inauguration of his father as president of Wake Forest College. As an athlete, Poteat won the singles and doubles Southern Inter-Collegiate Tennis Championships at Atlanta in 1907. Later he turned to the less strenuous game of golf, which, although he called it "the invention of the devil and perpetrated by his followers," he played every afternoon. His participation in Masonry began with his induction as entered apprentice by the Wake Forest Lodge on 21 Jan. 1908.

Also in 1908 he began studies towards a doctorate at Columbia University. Satisfactory academic progress did not prevent frequent attendance at the theater and the opera. Having thus been diverted but not interrupted, he was granted the Ph.D. degree in 1912 and immediately began to develop the characteristic features of his adult career. That year, after marrying Essie Moore Morgan on 26 June, he returned to Wake Forest College as professor of Latin. Poteat remained in this post, later serving as chairman of the department, until 1956, when the college was moved to Winston-Salem.

Poteat undertook scholarly writing soon after his academic appointment. In spite of administrative duties and the direction of the Glee Club (1912–23), he published a series of volumes consisting of colorfully, although scholarly, annotated texts and translations. They included Repetition in Latin Poetry (1912), Selected Letters of Cicero (1916, revised 1931), Practical Hymnology (1921), Selected Epigrams of Martial (1931), Selected Letters of Pliny (1937), T. Livius Narrator: Selections from Livy (1938), and a translation of Cicero's Brutus: On the Nature of the Gods, On Divination, On Duties (1950). These were interspersed with numerous journal articles. His professional activities also included a term as president of the Classical Association of the Mid-West and South in 1938. During summer sessions from 1924 to 1942 he taught at Columbia University.

Enthusiasm for Masonry and the Shrine in particular led him to the post of grand master of the Grand Lodge of North Carolina in 1923, to the honorary thirty-third degree, Knights Templars, to election as outer guard of the Imperial Shrine, and finally to the highest Shrine office, that of imperial potentate of North America, which he assumed at a meeting in Los Angeles in June 1950 and held during the next thirteen months.

Music was an ever-present interest. For about forty years he served as organist and choir director in the Wake Forest Baptist Church, Wake Forest. He gave many recitals on the organ and occasional vocal solos (while in New York he had been a member of the Brick Presbyterian Church choir and a soloist at the Church of the Intercession). In organ recitals he especially enjoyed playing transcriptions of more massive orchestral works, notably those of Wagner.

His outstanding achievements in these various fields were the result of a robust and even boisterous personality, a penetrating intellect, and a state of complete conviction. No one ever remained long in doubt about his opinions, which he expressed freely and pungently. Academically, as well as otherwise, he was a perfectionist, concentrating especially on purity and accuracy in the use of English. He spoke widely in the South, generally on causes he promoted from time to time. He was especially aroused by what he saw as a growing trend in the public schools towards vocational training and away from the humanities. He also held a violent dislike for "gospel hymns," which he called "jig tunes." When playing more traditional hymns, however, he spiritedly insisted that the congregation should not drag its singing.

Being near the statutory retirement age, in declining health, and somewhat resentful when the college moved to Winston-Salem, he chose to retire early and to remain at Wake Forest. On 29 Jan. 1958 he suffered a stroke and died the same day; two days later he was buried in the cemetery at Wake Forest. He was survived by his widow and two sons, Hubert McNeill, Jr., and William Morgan.

Men of Achievement in the Carolinas (1952 [portrait]).

Who Was Who in America, vol. 3 (1960). See also scattered references in Wake Forest Student and Old Gold and Black.