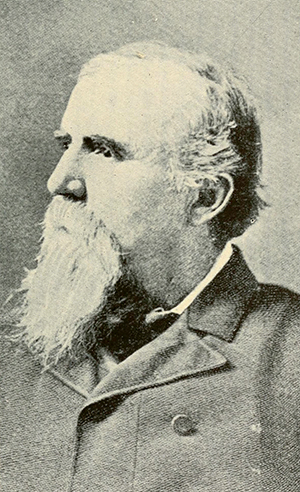 Lucius Eugene Polk, probably the ablest brigade commander in the Confederate Army of Tennessee, was born in Salisbury, the son of Dr. William Julius and Mary Rebecca Long Polk, the grandson of Colonel William Polk, and the nephew of Lieutenant General Leonidas Polk. In 1835 Lucius Polk's parents moved to Maury County, Tenn., to join other members of the family who collectively dominated this rich, fertile center of the state. After graduation from the University of Virginia in 1852, Polk became a cotton planter in Phillips County, Ark.

When war broke out, Lucius Polk volunteered as a private in Company B, Fifteenth Arkansas Regiment. As a member of the "Yell Rifles" he came under the command of Captain (later Major General) Patrick R. Cleburne. The two were devoted to each other and Cleburne prized Polk as a subordinate. They served together throughout the war until Polk's wounds forced his retirement. Polk quickly rose in rank to lieutenant. He won recognition for bravery and ability at Shiloh, where he was wounded. A few days later he became colonel of the Fifteenth Arkansas as Cleburne moved to brigade commander.

In the Kentucky campaign in the fall of 1862, Polk excelled although "scalped" by a minié ball in the Battle of Richmond in August and wounded again at Perryville in October. On 13 Dec. 1862 the Confederate War Department commissioned him brigadier general, and later that month he led Cleburne's old brigade into battle at Murfreesboro. Beginning with Murfreesboro and continuing through the Battles of Chickamauga and Missionary Ridge, Polk received continual praise not only from Cleburne but also from his corps and army commanders. Polk's enlisted men and others throughout the army echoed the compliments of their superiors. Sam Watkins described Lucius Polk in 1864 as a man "with long black hair that curled, a gentle and attractive black eye that seemed to sparkle with love rather than chivalry, and were it not for a young moustache and goatee that he usually wore, he would have passed for a beautiful girl. In his manner he was as simple and guileless as a child, and generous almost to a fault."

An incredibly successful brigade commander, he inspired confidence and that confidence inspired victory and determination. Polk's brigade (consisting of the First and Fifteenth Arkansas, Second and Forty-eighth Tennessee, and Fifth Confederate regiments) was the pride of Cleburne's division and that division was the pride of William J. Hardee's corps and the Army of Tennessee. Characteristically, in late June 1864, during the Atlanta campaign, Polk's brigade held the most exposed position in the Confederate line. The enemy opened a furious cannonade, killing many of Polk's men and virtually severing Polk's leg. This fourth wound ended his service.

Polk returned to Maury County and after the war, although crippled, resumed farming. A staunch Democrat, he was elected a delegate to the National Convention in 1884 and entered the Tennessee Senate in 1887.

During the war (19 Aug. 1863) Polk married his cousin, Sallie Moore Polk. They were the parents of five children. He was buried in St. John's Churchyard, just west of Columbia, Tenn.