Thaddeus Shaw Page, automobile distributor, congressional secretary, and federal archivist, was born in Aberdeen, the son of Flora Eliza Shaw and Robert Newton Page, who had careers in lumbering, railroading, politics, and banking. An uncle, Walter Hines Page, was a journalist and President Woodrow Wilson's ambassador to Great Britain during World War I. Thad's formal education came from attendance at Fishburne Military School in Waynesboro, Va. (1904–8), and The University of North Carolina (1908–12), where his training included one-half year of law. In Raleigh, on 29 Oct. 1913, he married Martha (Patsy) Macon Hinton. They had two sons: Thaddeus Shaw, Jr. (b. 1917), and John Hinton (1921–41).

As a college baseball star, Thad Page's initial yen was for a career in professional baseball. From this he was dissuaded by his father, then beginning his sixth successive term as a Democratic representative in Congress, who appointed Thad his personal secretary. In this capacity the son served until his father declined to run for renomination in 1916. Young Page then entered the world of business, setting up in Charlotte the Page Motor Company, a wholesale and retail automobile agency (1916–19). Then, for a year (1919–20), he was sales manager of the Winston-Salem automobile agency of W. I. Young and Company. This position he relinquished in order to assist in the management of what turned out to be his father's unsuccessful campaign (1920) for the governorship of North Carolina. Following a year's association with the Sandhills peach growers' cooperative association (1921), Thaddeus Page swung back into the orbit of automobile sales. After seven years (1921–27) as general manager of the H. A. Page Company in Aberdeen he became owner and manager of the Ford Motor Company's outlet, the Hamlet Motor Company, in Hamlet (1927–30). 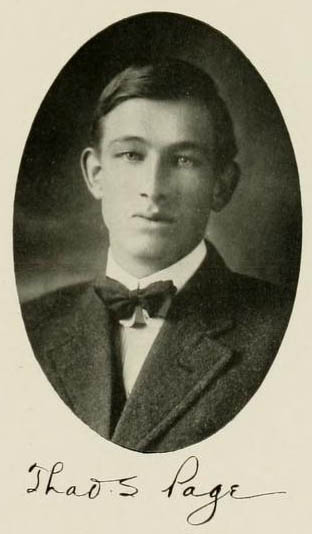 In 1930 Page left the world of business amid increasing intimations of the Great Depression and with the opportunity of aiding in the management of the successful campaign of Josiah W. Bailey as the Democratic candidate for U.S. senator from North Carolina. Page's efficiency was recognized by his appointment (1931) as Bailey's private secretary. In this position, as he later summarized it, he "handled correspondence, did some research work, and conducted relations with constituents, newspaper correspondents, and Government departments."

The name of Thad Page was sent by President Franklin D. Roosevelt on 8 July 1935 to the Senate to fill the post of administrative secretary in the newly created National Archives of the United States. Unanimously confirmed on 20 July, he began his new duties on 28 August. His experience on Capitol Hill stood him in good stead in his new position in the executive branch. Here he initially (1935–46) conducted relations with the Congress, press, and public; prepared budget justifications; edited publications; and arranged exhibits. Later, as director of the Legislative Service (1947–54), he operated a legislative reference service for the benefit of members, committees, and officials of Congress. Still later, as chief archivist of the Legislative, Judicial, and Diplomatic Records Division (1954–60), he was responsible for the accessioning, repair, description, servicing, and safety of archives received from the Congress, the courts, and the Departments of State and Justice. Special assignments included the secretaryships of the National Archives Council (1936–50), the National Archives Trust Fund Board (1936–50), and the board of trustees of the Franklin D. Roosevelt Library (1952–60). Page had contributed measurably to the principles and procedures that underlay the success of the pioneering National Archives establishment. Age forced his involuntary retirement from federal service in 1960. Unwilling, however, to face inactivity, he formed a connection with the Gem Realty Corporation of Alexandria, Va. in 1961; this he maintained until an eye condition forced him to terminate the association in 1964.

In politics Page was a Democrat, in religion a Presbyterian. He was deacon or elder in each of the following congregations: Presbyterian Church of Hamlet; Church of the Pilgrims, Washington, D.C.; Calvary and Westminster, both in Alexandria, Va. So active was he in the Westminster church that he was affectionately dubbed Mr. Presbyterian. Potomac Presbytery of the Synod of Virginia sent him as a commissioner to the Ninety-eighth General Assembly of the Presbyterian Church of the United States at Charlotte, 24–29 Apr. 1958, and also to the Ninety-ninth General Assembly in Atlanta, Ga., 23–28 Apr. 1959.

He maintained memberships in Kappa Alpha fraternity and the North Carolina State Society of Washington, D.C., as well as in the professional Society of American Archivists. The American Archivist journal for April 1950 includes Page's moving memorial to R. D. W. Connor, first archivist of the United States. Like Connor's, Page's capacity for friendship was unlimited. In physical appearance there was no distinguishing mark except a close-cropped mustache; at age fifty-seven he reported his weight as 153 pounds and his height as five feet, ten inches. No portrait is known to exist. He died in Circle Terrace Hospital, Alexandria, Va., and was buried in Bethesda Cemetery near Aberdeen.

Register of the National Archives (1937).

Makers of America: biographies of leading men of thought and action, the men who constitute the bone and sinew of American prosperity and life, vol. 1. Washington, D.C., B.F. Johnson. 1915. https://archive.org/details/makersofamericab01wash (accessed September 5, 2014).