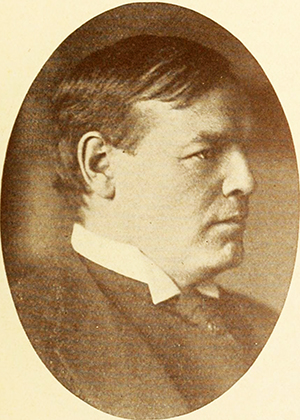 James Walker Osborne, lawyer, was born in Charlotte, the fourth and youngest son of James Walker and Mary Irwin Osborne. The widow of Thomas J. Moore, his mother was a woman of strong and vigorous mind, widely read in literature and profoundly interested in public affairs; she was a devoted companion to her children. Among his Scotch-Irish ancestors were Colonel Alexander Osborne and Adlai Osborne. Edwin Augustus Osborne was a cousin.

Young Osborne attended Davidson College, where he was active in debating societies and athletic events. In 1878 he won the Fowle Medal, given for the best oration delivered by a member of the junior class. He was graduated from Davidson the following year, and as one of the commencement speakers he chose as his topic "The Mediaeval Knight"—evidence of his gift for public speaking. Also an excellent student, he showed even then the enormous energy, both mental and physical, that characterized him throughout life.

Entering Columbia College law school, Osborne paid his way by giving lessons as a tutor. After graduation in 1885, he opened a small law office, serving chiefly sailors and longshoremen. From the beginning he was successful and enthusiastically immersed himself in the life of his adopted city.

An ardent Democrat, by heredity and by principle, he early assumed an active role in New York politics. Appointed to the staff of DeLancey Nicoll, district attorney of New York County, Osborne gained distinction and within two years was one of the most trusted and successful trial assistants in the office. For eleven years he conducted many of the most important criminal prosecutions in the county, perhaps the best known of which were the cases of Roland Burnham Molineux and Albert T. Patrick. At Molineux's first trial, the defendant was convicted of murder, but the judgment was reversed by the court of appeals; at his second trial, he was acquitted. Patrick, himself a brilliant lawyer, was convicted, and the sentence was affirmed. After a legal battle of several years, however, the sentence was commuted to life imprisonment by Governor Francis W. Higgins; later Patrick was pardoned by Governor John A. Dix.

In 1902 Osborne resigned as prosecutor and joined the firm of Osborne, Hess, and Churchill. On the dissolution of that firm, he resumed private practice with his old firm, Osborne, Lamb, and Garvan (formerly Osborne, Lamb, and Petty). In 1905 he was the Democratic candidate for the office of district attorney for New York County. He lost in a close race to William Travers Jerome, an independent Democrat, who had been nominated on the Fusion ticket.

For the rest of his life Osborne remained in private practice, accepting a number of public retainers in which he rendered notable service. In 1909 he was appointed a special attorney general of the state of New York and assigned to investigate and prosecute the American Ice Company for violating antitrust statutes. After long and bitter litigation, he obtained a conviction and the imposition of the maximum penalty. In 1910 he appeared as counsel for Senator Benn Conger of the New York State Senate in the prosecution of Senator Jothan Allds before the senate on the charge of taking a bribe to influence his actions as a legislator. Despite Allds's powerful financial and political backing, Osborne conclusively proved his guilt. The senator's conviction earned high praise for Osborne and resulted in the destruction of a corrupt lobbying influence and a general raising of ethical standards in the legislature.

The following year Osborne was counsel for the committee of the New York Senate that investigated political and social conditions in Albany; afterwards, conditions in that city markedly improved. In 1913 he was named special attorney general to investigate conditions and the treatment of prisoners in the state prison at Ossining; a vigorous and effective inquiry disclosed many abuses and led to a demand for prison reform and the appointment of Thomas Mott Osborne as warden of Sing Sing prison.

Osborne's last service to the state in a public capacity came in 1917, when District Attorney Edward Swann appointed him a special assistant in the investigations of alleged Rockaway land frauds, the Ruth Cruger murder case, and alleged motorcycle police graft, unearthed during the Cruger murder investigation. As a result of Osborne's work, indictments were found in all cases.

Thorough and painstaking in preparation, logical and forceful in the presentation of evidence, and masterly in cross-examination, Osborne became one of the best-known and ablest lawyers in New York City. His eloquent and persuasive addresses to the jury earned him a reputation as a Demosthenic orator.

In addition to his professional activities, Osborne was a devoted student of literature and history, particularly of medieval England and France. He was passionately fond of chess and was an excellent amateur player. In spite of failing health, he continued to participate in sports; indeed, he was a remarkably active man. An individual of high ideals, he was one of New York's most distinguished and picturesque citizens. He died in his apartment in New York City and was buried in Greenwood Cemetery.

"JAMES W. OSBORNE FOUND DEAD IN BED; Body Discovered by His Son, Who Had Called to Keep Tennis Engagement. DEATH DUE TO INDIGESTION Long Famous as a Criminal Prosecutor--Tried the Molineux and Patrick Cases." The New York Times. September 8, 1919. http://query.nytimes.com/mem/archive-free/pdf?res=F40610FF3E5E157A93CAA91782D85F4D8185F9 (accessed September 6, 2013).

"OSBORNE LASHES ALLDS AS JUDAS; Arraigns Him Bitterly While Comparing Conger to the Gladiator About to Die. DOUBLY FALSE, HE CRIES Declares He Whipsawed, "Like a Gambler," Both the Senator and Conger in the Stevens Bill." The New York Times. March 24, 1910. http://query.nytimes.com/mem/archive-free/pdf?res=F50C15F83F5417738DDDAD0A94DB405B808DF1D3 (accessed September 6, 2013).