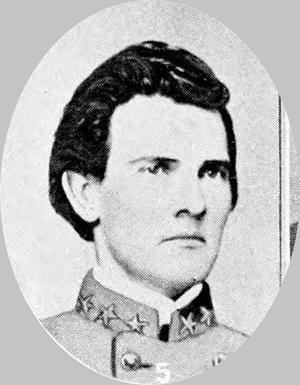 Edwin Augustus Osborne, Confederate captain, Episcopal priest, and founder of Thompson Orphanage, was born in Moulton, Lawrence County, Ala. He was one of eleven children of Ephraim Brevard and Nancy Smith Osborne. He was named for his father's brother, Edwin, and for General John Augustus Young. His father was a physician and was involved with the War of 1812 and the Battle of New Orleans. Originally from North Carolina, Ephraim moved to Alabama and practiced medicine for a time; from there he went to Arkansas and later to Hill County, Tex., where he died a successful physician and a wealthy enslaver. Nancy Smith Osborne was the daughter of a rice planter who moved to Virginia early in the nineteenth century. Her brothers were also wealthy enslavers in Alabama, Mississippi, Arkansas, and Texas.

Born in Alabama in a double log house, Edwin Augustus Osborne grew up accustomed to slavery and enslavement. He recalled that as a ten-year-old in Arkansas he "witnessed savagery and brutality toward slaves never before seen." Osborne was an avid reader, especially of the Bible. He first attended a small school in Texas five miles from home and boarded with a family related by marriage. His chances for further education were very poor; his plan was to study at home, work for a while, and then go to school. He became an expert horseman, taming and training wild horses and helping herd cattle. After working various jobs and traveling in the state, Osborne appealed to his widowed Aunt Peggy, Margaret MacWhorter Davidson, who owned a large plantation in Mecklenburg County, N.C. Noted for her generosity, she immediately invited him to her home, arranged for him to enter a preparatory school, Statesville Military Academy, and paid for his education there. He entered the academy in 1859 and remained until the Civil War started. When he joined the Confederate army, his aunt gave him money to buy a horse and saddle, and to purchase and enslave a person.

Elected captain of Company H, Fourth Regiment, North Carolina Troops, Osborne fought at Yorktown, Williamsburg, and Seven Pines, where he was wounded in 1862. In the Maryland campaign, he saw action in the Battle of South Mountain and at Sharpsburg, where he was wounded again. His regiment then proceeded to Chancellorsville, Gettysburg, Spottsylvania and the Wilderness, where he received another injury, and Appomattox. Promoted to major, lieutenant-colonel, and finally colonel, he left his regiment to recover from his frequent wounds. In 1865, during a period of recuperation, he met and married his second cousin, Fannie Swann Moore.

A few weeks after the wedding, while attempting to rejoin his regiment, he learned that General Robert E. Lee had surrendered. Awaiting support that never came and facing evident destruction, Company H, the "Hunting Creek Guard" from nothern Iredell, under Major Osborne, charged Union soldiers and captured six pieces of artillery. Wounded within a few rods of the breastworks, Osborne forced a Union soldier to carry him beyond the breastworks to the point where his troops had advanced. On May 19, 1864 at Spottsylvania Court House, while charging and repulsing Union soldiers, he was shot through the right hand, losing two fingers. After the war ended, Osborne had only a horse. Ill with fever, he went to Statesville, where his wife was staying with her mother.

After the war, Osborne taught school in Statesville and subsequently in Charlotte, where, having studied law, he was admitted to the bar. In 1867 he was appointed clerk of the superior court. He was reelected twice and held the position for ten years.

In 1874, he left the Presbyterian church, became a member of the Protestant Episcopal church (the denomination of his wife), and decided to enter the ministry. Ordained deacon on June 3, 1877, he was named rector of Calvary Church, Fletcher. Osborne remained in the mission area of Henderson, Buncombe, Rutherford, Polk, and Haywood counties until his ordination as priest on May 29, 1881.

In 1884, he was appointed to the charge of St. Mark's mission (in Mecklenburg County) and St. Paul's (Monroe), neither of which had a church building. While he was leader, two churches were constructed and both congregations prospered. He also added a congregation for Black worship, St. Michael's and All Angels, in Charlotte. Shortly after returning to the Mecklenburg area, Osborne conceived the idea of establishing an orphanage. The rector of St. Peter's Episcopal Church, the Reverend B. S. Bronson, held in trust the deed to some property formerly used by a private school that had failed; he donated the property to the diocese, stipulating that it be used as an orphanage and that Osborne be appointed its first superintendent. Visiting groups around the state at his own expense, Osborne appealed for funds. As a result of his efforts, on May 10, 1887, the Thompson Orphanage and Training Institution opened its doors with ten children. It was named for Lewis Thompson, who had given money for the failed school.

When the Spanish-American War started, Osborne—thinking that his war experience would be of special use—resigned his position to serve as chaplain of the Second Regiment of North Carolina Volunteers. He remained on active duty throughout the war.

After the conflict, he became secretary of the Executive Missionary Committee of the diocese and for a short time was chaplain of St. Mary's School in Raleigh. From 1899 to 1902, he served as archdeacon of the Diocese of North Carolina and then, when the diocese was divided into two convocations, as archdeacon of the Charlotte Convocation. He was a deputy to the General Convention from 1907 to 1910 and for a time served on the diocesan committee on canons. Osborne's particular interest was the mission field rather than the pastorate of established congregations. In 1908 he was appointed chaplain to the bishop and attended the Pan-Anglican Congress in London.

Noted for his actions, Osborne gained notoriety within the community. He wrote poetry in a diary that he had kept during the war to reflect on his Civil War experiences. For a time, Osborne was the chaplain of the Mecklenburg Camp of Confederate Veterans.