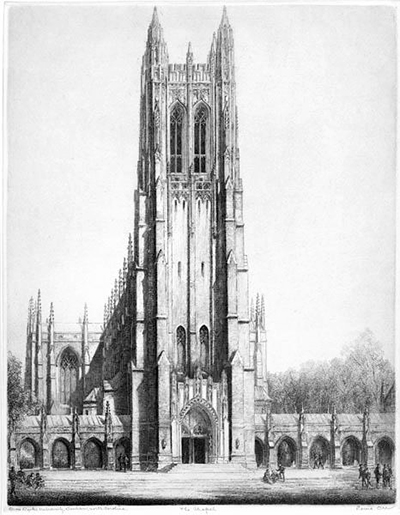 Louis Orr, painter and etcher, was born in Hartford, Conn., the son of John Henry and Carolina Louise Naedele Orr and the grandson of J. W. Orr, a well-known New York City engraver and printer. He was a pupil of Walter Griffin at the Hartford Art School (1903–5) and afterwards studied as a scholarship winner at the Art Students League in New York. In 1906 he went to Paris, where he attended the Académie Julian and studied under Jean-Paul Laurens. Orr first painted in oils and watercolors, but dissatisfied and unsuccessful with his efforts, he turned to etching, a medium that had long interested him. Working from intuition, he taught himself and developed his own unique method for etching. For a time he served as art editor of the Paris Herald. On 10 July 1913 Orr married Gabrielle Chaumette. For the rest of his life he resided periodically in Paris (in the 1930s, at 5 Rue Mazarine), where he died.

At the start of World War I, having applied to the French government for work that would assist France, Orr made etchings of Rheims Cathedral under German artillery fire. For these and other etchings, he was made a member (1918) and an officer (1930) of the French Legion of Honor. His were the first works by a living artist acquired by the French government for the Louvre National Museum and the first original etchings by an American artist purchased for the permanent collection in the Louvre's chalcography department. Among these works are three of Rheims Cathedral under Bombardment, Le Pont Neuf, Paris, the centennial portrait entitled Louis Pasteur in His Laboratory, and six others. His works also appear in the Luxembourg Museum and the Bibliothèque Nationale in Paris.

By the time he returned to the United States after the war, Orr was regarded as preeminent in his field and was lionized by East Side art dealers. He completed many commissions in this country, among them the Municipal Group, Springfield, Mass.; college buildings at Dartmouth, Duke, Pittsburgh, Princeton, University of Virginia, Wellesley, and Yale; The National Capitol at Washington, commissioned by Yale University as the William Howard Taft Memorial Etching and used in all important American embassies throughout the world; the Phoenix (Arizona) Insurance Company headquarters; and the United Nations Building, presented in 1959 to member governments as "the official representation of the international organization's mid-Manhattan Exhome." In the United States, his works are represented in the Albright Art Gallery, Buffalo, N.Y.; the New York Public Library; the Oakland (Calif.) Museum; the State Bank, Hartford; and the Yale University Art Museum. An important collection of his French etchings is owned by the Department of Foreign Languages and Literatures at East Carolina University.

In June 1939, on a sojourn in the United States that would be prolonged by World War II, Orr acceded to a request to execute the most outstanding work of his career—a series of etchings on North Carolina. The request came from Greenville native Robert Lee Humber, a fellow expatriate with whom Orr had become acquainted in Paris and who had recently returned from Europe because of the war. An international lawyer and business executive and later a leader in the founding of the North Carolina Museum of Art, Humber first had to overcome Orr's reluctance to concentrate for years on a single geographic area and to forego the high prices he was accustomed to receiving for his works in the capitals of the world. But largely by underwriting the cost of the project himself, he convinced Orr to accept a commission that would result in the artist's magnum opus—fifty etchings of uniform dimensions depicting North Carolina scenes (131/4 × 153/4") plus a larger state capitol (ca. 17" × 21"). Orr worked exclusively on this commission for twelve years (1939–51). 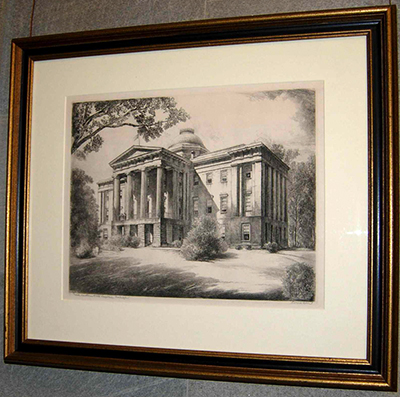 The first year of this ambitious project he devoted largely to research and planning. He examined approximately 4,000 to 5,000 photographs in the North Carolina Department of Conservation and Development and discussed the undertaking with Christopher Crittenden, director of the Department of Archives and History, and R. D. W. Connor, professor of North Carolina history at The University of North Carolina. He also traveled about 6,000 miles around the state to become familiar with its numerous cultural centers and historic sites. Sometimes he was a guest of people in the area he visited, as when he stayed with Mr. and Mrs. James Sprunt at Orton plantation near Wilmington.

After he and Humber decided on the subjects for the series, ranging from the Wright Brothers' Memorial at Kitty Hawk to the Biltmore House near Asheville, Orr would visit a selected site and, using pencil and paper, make a freehand drawing at the time of best light and shade. If the subject were a building no longer in existence, such as the old statehouse or Tryon Palace, he would base his drawing on older pictures. Later he would etch his intricate drawing into the surface of a plate from which the etchings would be made. The etching process often took months, with the oversized state capitol alone engaging him from about November 1940 to April 1941. Although he made the freehand drawings for the series in North Carolina, he did the actual etchings at his apartment on the Connecticut estate of a former president of the Hartford Life Insurance Company. Orr devised steel-faced plates for the etchings, a technique he developed especially for the North Carolina series, permitting each successive etching to have the same degree of sharpness as the first one.

The printer contracted to pull the etchings from the plates was a Mr. White of New York, known at the time as perhaps the outstanding U.S. printer of etchings. In an effort to keep the cost of the prints affordable, however, an inexpensive paper was chosen; it has proven to be of inferior quality, with the result that many etchings now need conservation.

When Orr completed the commission, Humber himself oversaw distribution. At Orr's insistence, he sold selections from the series in ten albums of five etchings each, except for the large state capitol, which was sold separately. Orr felt he could not afford to sell one etching for ten dollars, the price Humber proposed so that institutions with limited resources and individuals with moderate means could acquire selections from the series. But he rationalized that he could sell one for fifty dollars and, because the buyer liked his work so much, give the other four in the album to the purchaser without charge. This plan reconciled Orr to the modest prices and enabled Humber to make the project a cultural undertaking rather than a commercial enterprise. Humber eventually declined an offer from The University of North Carolina Press to take over distribution of the series; the press wanted to charge one hundred dollars per album, a price he felt would prohibit many from acquiring the works. Now available only rarely on the secondary market, the etchings currently sell for hundreds of dollars apiece.

It has been estimated that a total of 7,934 etchings were produced, with as few as 122 etchings of some scenes and as many as 230 of others (the number depending on the market demand for each album). In addition to individual albums, 91 complete sets were purchased, of which 23 were placed in college and county libraries around the state for public viewing. Although the etchings are not numbered, they are all signed by the artist.

As Humber noted, Orr could see beauty where others could not and captured this beauty in his etchings. He was a superb draftsman who noted the minutest detail, "recording even the slightest deviation in the angles of roofs, the exact number of sawteeth in a pediment, and the elaborate ornamentation of a cornice." He was a master of lights and shadows, pursuing them "down fluted columns, under the eaves of buildings, and around the . . . edges of shrubbery and leaves." He also possessed "an unrivaled technique for interpreting texture, whether it be wood, brick, or stone, especially the mellowed patina that comes with age." Largely for these reasons, the director of a leading museum observed that the three greatest etchers of all times were Rembrandt in the seventeenth century, Piranesi in the eighteenth, and Orr in the twentieth.

Executed by one of history's three finest etchers, Louis Orr's North Carolina series represents, as Humber remarked, the most important artistic work on any state in the Union. It captures "the architectural splendor of North Carolina in all its phases," reflecting the excellence of the state's underestimated architecture as well as the refinement of its social life and the rich cultural heritage of its people. The series also reveals the artist's affection for his subject, an affection he once expressed in a letter: "The South always, from childhood, intrigued me; I love North Carolina and if the Etchings express some of this sincere admiration, then I have not been chasing a mirage."