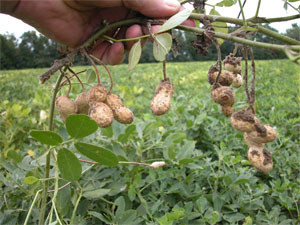 Nicholas Nichols Nixon, planter and pioneer in the commercial production of peanuts in the South, was born on the family plantation on Topsail Sound, seven miles northeast of Wilmington. He was the sixth child of Nicholas F. and Ann Nichols Nixon.

Nixon very early embarked on a successful career as a planter. Although he inherited land from his father and eventually acquired a plantation near Laurinburg and another near Salisbury, his major interest was the historic Porter's Neck plantation, which he acquired over a fifteen-year period (1839–54). This 1,282-acre plantation on Topsail Sound became the center of his peanut operations. The Nixon family spent its summers at Porter's Neck, where the whitewashed plantation buildings were reported to be in "good order" and "exceedingly pretty." In the winter, the family lived at the Nixon residence on Chestnut Street in downtown Wilmington so that the children could attend school in the town.

In the antebellum period, five-sixths of the commercially grown peanuts in the United States were produced in a small area around Wilmington. The commercial development of this crop was due largely to the pioneering activities of Nixon at his Porter's Neck plantation. Here he developed techniques and practices of peanut farming that became the standard of cultivation for many years.

He began his first experiments with the crop about 1818, and, as he later recalled, it took him some thirty years of "toil and experience" to produce a commercial crop successfully. Numerous agricultural experts who visited his farm before the Civil War reported that he used a system of crop rotation in which a peanut crop succeeded rye, oats, or millet on a field that was then left to lie fallow for a year. Since Nixon devoted about three hundred acres annually to growing his peanut crop, this meant that about nine hundred acres at Porter's Neck plantation were involved in the production of peanuts. Throughout the 1850s and until his death, he was the nation's largest peanut producer. It was on Nixon's plantation in 1856 that Thomas L. Colville, a Wilmington mechanic, constructed a stationary, steam-driven thresher, the first successful peanut picker ever invented.

Nixon made his most significant contribution to the development of the peanut industry in February 1868, when he was prevailed upon to write a long paper for the Southern Cultivator on the cultivation of the peanut. Drawing on his unparalleled knowledge of this crop, he wrote what became one of the most widely reprinted articles in the southern agricultural press in the post–Civil War period. It contained nearly all that was then known about the cultivation of peanuts.

Nixon's farming activities recovered quickly from the effects of the war as the peanut market boomed. In 1867 it was estimated that he would produce between 13,000 to 15,000 bushels and that he would receive from two to four dollars per bushel for his crop. At the time of his death, it was noted that "few men of his age rallied as he did from the disastrous effects of the late war, and entered more promptly upon a course of successful labor and enterprize."

In addition to his extensive farming operations, Nixon operated at various times a sawmill, a gristmill, and a number of turpentine stills. He served on the board of the Wilmington and Manchester R. R. Company and on the boards of a number of other companies involved in internal improvements; he also was a director of various public institutions. For many years he was a magistrate of New Hanover County. In 1848 he was elected on the Democratic ticket to the North Carolina House of Commons from New Hanover County, and in 1850 he was elected to the state senate from the Sixteenth District, after which he does not appear to have entered the political arena again. He served as senior warden of St. John's Episcopal Parish from its organization in 1853 until his death and educated all of his daughters at St. Mary's School in Raleigh.

Nixon married Elizabeth Ann Morris (12 Mar. 1807–2 Dec. 1875), by whom he had six daughters. All of them lived to maturity and married. Nixon died in his Wilmington residence and was buried in Oakdale Cemetery.