Arthur Cleveland Nash, architect, was born in Geneva, N.Y., where his father, Francis Philip Nash, was a professor of romance languages at Hobart College. His mother, Katharine Cleveland Coxe Nash, was the daughter of the Right Reverend Arthur Cleveland Coxe, the Episcopal bishop of western New York. Young Nash attended Phillips Exeter Academy and was graduated from Harvard in 1894. After a year at the Massachusetts Institute of Technology, he left for the Beaux Arts Institute, in Paris, where he studied for five years in Jean-Louis Pascal's atelier. In Paris, he received medals in architecture, archaeology, and modeling and was awarded a diploma in 1900.

After teaching briefly at Cornell, Nash moved to New York City, where he was a practicing architect until 1920. During those years he built a number of houses in New York and New Jersey, a gymnasium and science building at Hobart College, a dormitory at Smith College, and a clubhouse in Greenwich, Conn.

In 1922 he became architect for The University of North Carolina, working in association with the builder, T. C. Atwood, and with the consulting architectural firm of McKim, Mead, and White of New York. He contributed to the new library (now the L. R. Wilson Library) and designed Venable Hall (1924), Kenan Stadium and Field House (1927), Graham Memorial (1929–31), and a number of dormitories, including Spencer, Aycock, Graham, Lewis, and Everett. In 1930 Nash designed Memorial Hall, which was built in the same year to replace an older auditorium. He also remodeled some of the older buildings: South Building with its new south portico, Person Hall, the Playmakers Theatre, the hall and stairway of the president's house, and Hill Hall. Nash designed the Carolina Inn adjacent to the campus. 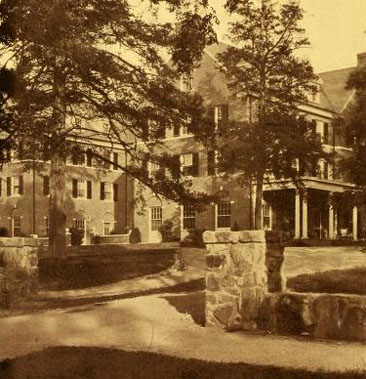 His influence was felt strongly in the town of Chapel Hill. For the main street he advocated the colonial style, which a number of merchants used for their storefronts. Nash felt this style had the necessary "dignity, repose and cultivation" appropriate for a scholarly town. He designed several fraternities and private houses in Chapel Hill, including his own home on Cameron Avenue and the Leavitt House on Franklin Street. Elsewhere in the state, he designed the John Sprunt House in Wilmington and restored the Lawrence Stallings House near Leasburg in Caswell County. In Raleigh, he designed the Revenue Building, the Fairground Building, and additions at Peace Institute and did some renovations at the state capitol.

In 1930 Nash retired and moved to Washington, D.C., but continued as consulting architect to the university until 1953. In connection with architect H. Raymond Weeks, he contributed design ideas to a number of later buildings, including the public health and medical building; Woollen Gymnasium and Bowman Gray Swimming Pool; Lenoir Hall; Alderman, McIver, Stacy, and Whitehead dormitories; Wilson Hall; the women's gymnasium unit; the naval armory and Navy Hall (later the Monogram Club); the North Carolina Memorial Hospital complex; and additions to the Carolina Inn, Wilson Library, and Venable Hall.

When the North Carolina chapter of the American Institute of Architects wanted to nominate Nash for consideration as a Fellow, he turned it down. He felt that others also deserved credit for his work, citing as an example William M. Kendall, chief representative of McKim, Mead, and White, who had done the detailing of the library. The overview of the campus, however, was Nash's and the results of his efforts were highly praised. Robert B. House spoke of Nash as "an artist in discerning the quality and tone of the ancient campus and blending the new harmoniously with the old." House suggested that his greatest contribution was "the symmetrical spacing of structures with plenty of room for light and air around each edifice." At the June 1954 commencement in Chapel Hill, Nash was awarded an honorary doctor of laws degree.

Nash died at his daughter's home in Baltimore and was buried in Mount Auburn Cemetery, Cambridge, Mass.

"A Brief Discussion of Campus Architecture at the University of North Carolina" (manuscript in possession of Mrs. E. E. Caldwell, Chapel Hill).