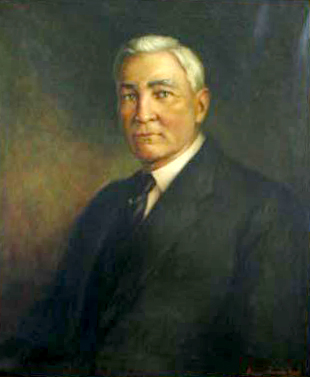 George Whitfield Connor, lawyer, legislator, and judge, was born in Wilson to Henry Groves and Kate Whitfield Connor. He was the first of twelve children, one of whom, Robert D. W. Connor, became a noted historian and first archivist of the United States. His father was a member of the state legislature, serving as speaker during the 1901 session, and was also a superior court judge and an associate justice of the North Carolina Supreme Court.

In many ways, George Connor's life followed that of his father. As a child, Connor attended the Wilson graded schools. In preparation for college, he was tutored by the Reverend B. S. Bronson, rector of Saint Timothy's Episcopal Church. Connor entered The University of North Carolina in the fall of 1888, not yet sixteen years old and the youngest member of his class, and was graduated cum laude in June 1892. He then served as principal of Goldsboro High School from September 1892 until June 1894. On 30 May 1894 he married Bessie Hadley, daughter of John C. Hadley of Wilson. They had four children, a son who died in infancy, another who died of an accidental gunshot wound, and two daughters, who grew up and married.

From 1894 until 1897, Connor served as superintendent of the Wilson public schools, and from the latter date until 1899 he was chairman of the Wilson County Board of Education. He also studied law, being admitted to the bar in February 1899 and thereafter practicing until his 1913 appointment by Governor Locke Craig as judge of the superior court, second district. Connor maintained a business partnership with J. C. Hadley and Company in Wilson from 1899 to 1912. He served as a trustee of The University of North Carolina from 1905 to 1909. From 1909 to 1911 he served in the state house of representatives and in his last year there was speaker of the house and a member of the Commission on Constitutional Amendments.

Connor served from 1913 to 1924 as superior court judge; in the latter year he was appointed by Governor Cameron Morrison associate justice of the supreme court. He held this position until his death in 1938. During his tenure as supreme court justice, he was a lecturer in the Law School of The University of North Carolina from 1925 until 1929. In 1928 he was awarded an honorary LL.D. degree from the university. He served as chairman of the Committee for the Improvement of the Laws of North Carolina in 1931.

Connor was a conservative, states' rights Democrat. As a legislator he opposed the Federal Income Tax Amendment as long as there was hope of defeating it. He was active in the Episcopal church and several civic organizations in Wilson.

Though in ill health several months before his death of a heart attack, Connor had been active on the bench as late as the previous week. Survived by his wife and two daughters, he was buried in the Connor family plot at Maplewood Cemetery in Wilson.

Leath, Thomas Horne. "Address of Thomas H. Leath on presentation of the portrait of the Honorable George Whitfield Connor to the Superior Court of Wilson County, North Carolina, by his daughters on 4 February 1952." [North Carolina? : s.n., 1952?]