William Hardy Murfree, attorney and congressman, was born at Murfree's Ferry (now Murfreesboro), the son of Hardy and Sally Brickell Murfree. He was graduated from The University of North Carolina in 1801. After reading law for a year at Edenton, Murfree opened a law practice in Murfreesboro, where he was also a partner in a mercantile enterprise. 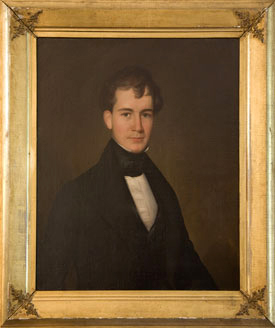 Murfree entered politics in 1805, when he was a successful candidate for the state House of Commons. He served a second term after his reelection in 1812. In the latter year he also served as Democratic elector in the Edenton District for the Madison and Gerry ticket. In 1813 he was elected to the first of two terms in Congress, during which he "had the reputation of a true republican." Reviving the idea of his father for a series of canals to connect western agricultural regions with Atlantic ports, Murfree in 1814 introduced in Congress an extensive plan of internal improvements similar to that later championed by Archibald D. Murphey. His project included the connection of the larger towns of North Carolina and South Carolina with Norfolk and Savannah. Nothing came of the proposal, though it created considerable interest in the South Atlantic states and won the endorsement of Nathaniel Macon.

By 1820 Murfree had grown discouraged about the prospects for commercial development in eastern North Carolina. After arranging his affairs in the state, he followed his father's footsteps to Tennessee, settling in 1823 on lands inherited from Hardy Murfree. Like his father, however, Murfree survived the change of residence for only a short time. He died at his home in Nashville, leaving his wife of eighteen years, Elizabeth Maney Murfree, and a son, William Law.