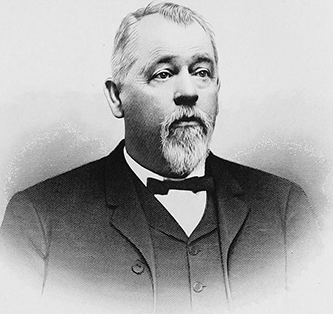 Mark Morgan, Confederate soldier, industrial pioneer, banker, legislator, and philanthropist, was born on a farm near Lillington, Harnett County, the youngest son of Reese (or Reece) (1804–47) and Mary Mathis (1805–92) Morgan. Reese was the son of John Morgan, of Welsh and Scottish ancestry, who emigrated from Pennsylvania (some say Virginia) to the Cape Fear region after 1780; he probably was related to Mark Morgan, settler in Orange County, eponym of Morgan Creek in Chapel Hill, and benefactor of The University of North Carolina, although the relationship has never been established. Reese and Mary gave their sons biblical names. The oldest was David and the fourth, Benjamin; the others were Matthew, Mark, Luke (died in infancy), and John. This pattern was broken for their daughters Maria, Catherine, and Cleopatra.

When Mark was seven, Reese's health failed. Though the child was extremely bright and loved school, he gave it up to take a twelve-hour-a-day job at the Rockfish Manufacturing Company (now Hope Mills), near Fayetteville, where his father had been employed. Mark carried spools and water and acted as bobbin boy to earn fifty cents a week. When Reese died, Mark was already a valued employee. He displayed remarkable mathematical and mechanical abilities and a willingness to work and to assume responsibility. Morgan learned all aspects of textile manufacturing, made improvements in the mill's machinery, and often forged his own tools for a special job. At twelve he was a spinner and at twenty-four, a supervisor of spinning. With the outbreak of the Civil War in 1861 he, along with other employees of the cotton mill, was "frozen" to the job by Governor John W. Ellis. But Morgan (first lieutenant) and brothers John (sergeant) and Matthew (private) were active members of the Rockfish Liberty Guards. This company was placed under the command of Major Francis S. Childs in Fayetteville and saw intermittent action throughout the war.

On 3 Sept. 1863 Morgan married Margaret Lauder Cameron (1834–1916), a schoolteacher and the daughter of Angus and Katherine Cameron of Johnsonville, Harnett County. They had four children: Marcus Lauder (m. Eugenia Morrison), Lena (m. Eugenia's brother, William H. Morrison, and, after his death, A. A. Malloy), Ida Malloy (died at age two), and Margaret (m. Dr. K. A. Blue and, after his death, A. F. McGuire). When Marcus was born (24 Feb. 1865), Morgan's company had just been called to duty to destroy bridges in the path of General William T. Sherman's army. Taken prisoner, Morgan was paroled by a kindly Union officer on 9 March. Arriving home, he found his house burned, all furniture destroyed except the bed supporting his wife and infant son, and no food anywhere. With fifty dollars in gold and some Confederate currency, the exhausted soldier walked seven miles back to Fayetteville, where he bought nineteen pounds of cornmeal for nineteen dollars. On his return, he learned that the Episcopal priest had brought a gift of bacon from his own meager supply. Sherman burned Rockfish Mill but spared Beaver Creek because it was attached to a gristmill needed to grind Yankee corn. Morgan spent the ensuing months rebuilding Beaver Creek Mill, but late in 1866 he accepted Colonel T. M. Holt's offer of the superintendency of Granite Mills on the Haw River in Alamance County. Here he invented and built by hand a governor for waterwheel gates to turbines, which became a standard device as long as waterpower was used for milling.

Described as five feet seven and slender, with brown hair, neat, short beard, low-pitched voice, and level gaze from piercing hazel eyes, Morgan exhibited a quiet confidence. A later photograph shows him to be stocky, the sadness and strain of the war years finely etched on his face. But he was not wholly solemn—his wit was dry and homespun. The oil portrait hanging in the boardroom of Morgan Mills reveals an undeniable twinkle in his eye. His granddaughter Margaret (Mrs. C. I. Clark, Jr.) remembers how, as a child, she was entertained by his original bedtime tales—one favorite was about a donkey, whose "Hee Haw" he imitated to perfection. He sang in church choirs from an early age and encouraged musical evenings among his mill employees, often playing the fiddle himself.

Morgan built Granite Mills into a leader, but illness forced him to resign in 1870. In 1872, when his health improved, he became superintendent of Colonel Charles Malloy's Laurel Hill Cotton Mill near Laurinburg. He put this mill into top condition and in 1875 and 1880 bought shares in the business, which was renamed Malloy and Morgan. Three additional mills were built: Richmond Cotton Factory (after 1893, Richmond Mill), Ida Yarn Mill (named for Morgan's deceased daughter), and Springfield Cotton Mill, all on the same Gum Swamp stream. After 1880 he also acquired mill interests in McCall, S.C.; became one of the area's leading cotton farmers; helped build the Cottonseed Oil Mill at Gibson, N.C., and establish the First National Bank of Laurinburg; and was named vice-president of the Scotland County Savings Bank and president of Red Springs Cotton Seed Oil and Fertilizer Company. Following the deaths of his son Marcus (1900) and son-in-law William Morrison (1906), both associated with him in the business, Morgan, almost seventy, again shouldered the full burden of the mills and carried on as president until his death.

Having had little formal schooling himself, he became a steadfast champion of education. Besides making private loans to poor, worthy young people for their schooling, Morgan, a staunch Episcopalian, was elected to the board of trustees of Red Springs Seminary (Presbyterian), forerunner of Flora MacDonald College, and in 1904 gave money to build Morgan Hall on campus. His daughter Margaret was the first graduate of the college. In 1905 he built and deeded to the North Carolina diocese an Episcopal church in downtown Laurinburg (now St. David's in Azure Court). The same year he was elected to the North Carolina General Assembly by one of the largest majorities ever returned in the county. He retired after one term. Following a brief illness, he died at his home near Richmond Mill. Funeral services were conducted at the Ida Mill Presbyterian Church before a Masonic burial in the family cemetery nearby.