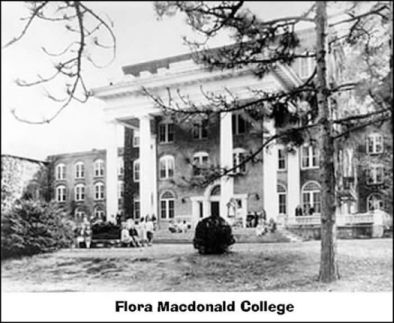 Flora Macdonald College in Red Springs originated in 1896 as Red Springs Seminary, a Presbyterian school that was the successor to Floral College (1841-78). In 1903 the college was renamed Southern Presbyterian College and Conservatory of Music, and in 1915 it became Flora MacDonald College-named for the popular Scottish heroine who lived in the Carolina colony for five years beginning in 1774.

In 1952 the Presbyterian Synod of North Carolina authorized a study of seven of the Presbyterian colleges under its jurisdiction and decided to merge Flora Macdonald College with Peace and Presbyterian Junior College to form one coeducational, four-year college to be located at Laurinburg. Chartered in 1958, St. Andrews Presbyterian College opened in September 1961. On 26 Oct. 1961, the Flora MacDonald property was sold to the Red Springs Development Corporation for $50,000.