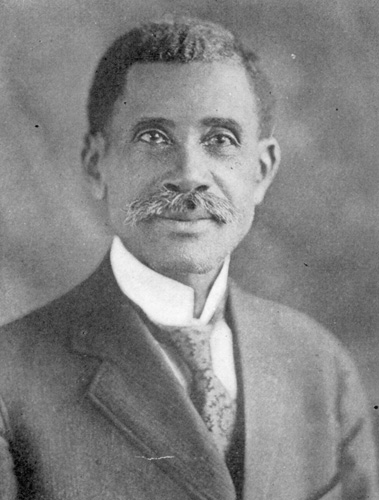 Peter Weddick Moore, educator, was born near Faison in Duplin County, the son of Weddick and Alecy Thompson Moore, both slaves. His father allegedly was killed by the Ku Klux Klan during Reconstruction, and the task of rearing the five children fell to his mother. Although uneducated, she strongly believed in schooling, and she was deeply religious; it is likely that Moore received from her the perseverance and ideals that characterized his personal and professional life.

It is believed that he attended a school established in the neighborhood by the Freedmen's Bureau. He then studied at the Philosophian Academy, in nearby Sampson County, conducted by Burke Marable, under whose guidance Moore developed independence and ambition. The young man devoted himself to study with great purpose. At age twenty he was certified to teach in a one-room school near Clinton. He supplemented his earnings by raising cotton as a tenant, and with the money he saved he enrolled in Shaw University in Raleigh in the fall of 1880. President H. M. Tupper recognized Moore's ability as well as his need for support and in 1882 appointed him a student instructor. Moore also worked in a brickyard on campus and in a nearby foundry.

A classmate noted that Moore was "well informed on all current events" and that science and mathematics were his favorite subjects. He received an A.B. degree in 1887; later Shaw awarded him both M.A. and LL.D. degrees in recognition of his contributions to education in the state.

After leaving Shaw, Moore taught for about a year in Bertie County and then was named assistant principal of the State Normal School in Plymouth, where he remained for four years. In 1891, on the recommendation of Major S. M. Finger, state superintendent of public instruction, Moore was made principal of the new State Normal School for the Colored Race (now Elizabeth City State University). Here he remained for the rest of his life.

The General Assembly had appropriated nine hundred dollars for the school but made no provisions for either a building or a site. With the aid of the citizens of Elizabeth City and the board of trustees (whose members were all white), Moore and his assistant, J. H. Turner, soon obtained the Rooks Turner Building on Body Road Street and the school opened on 4 January 1892 with sixty pupils. With enrollment increasing each year, the school moved to a larger facility in 1894 and then to its present site in 1912.

Moore was concerned not only with the academic training of his students but also with their spiritual and moral well-being. In addition to intensive and thorough training in subject matter, he stressed "the excellence and dignity of right living." He insisted on upright conduct and always conducted himself in such a manner that his students might learn from his example. As soon as funds were available he added an industrial program, believing that "[t]rained cooks and educated farmers are needed as well as professionally trained teachers." Moreover, some work with the hands, as well as academic exercises, became a required part of the daily routine. He wrote that "industrial education not only increases learning capacity, but promotes fidelity, accuracy, honesty, persistency and intelligence. The capacity to make a living becomes enlarged into the capacity to make a life." He made every effort to provide training that would "help to avoid that which is superficial and furnish in its stead those fundamental qualities that make character."

In addition to his administrative duties, Moore did much of the teaching, supervised the practice school, and handled all disciplinary problems. Around 1921 his health began to fail, and the position of dean was created; John H. Bias was then hired to relieve him of more minor duties. After a few years, however, Moore's health declined further, and it became evident that he could not carry out the responsibilities of his office much longer. At the commencement exercises of 25 May 1928, he was named president emeritus and granted a salary and a well-furnished house for life. After his retirement, at his insistence, he continued to teach courses in classroom management.

For many years Moore conducted the Teachers' Institute in eastern North Carolina and served as president of the North Carolina Negro Teachers' Association, of which he was a charter member. Twice the governor of North Carolina appointed him to represent the state at the National Educational Congress. In 1922 he was also requested to attend an interracial conference in Atlanta.

Indicative of Moore's perception and understanding was his reaction to the political campaign of 1900 for the adoption of an amendment to the state constitution, the effect of which would be to disfranchise blacks. "[T]his disfranchising amendment . . . will be a blessing in disguise," he stated. "It will mean the enfranchisement of the literate members of my race. Many of us are trammeled and we cannot exercise that political freedom which is so essential to the uplifting of any people. Hugging the delusion incident to emancipation, my race is all too gregarious . . . Our leaders are now subjected to the hectoring of the illiterate of our race . . . I entertain an abiding confidence that this disfranchising amendment will bring forth an educational awakening, the like of which has never been witnessed in North Carolina [which will] prepare all men, irrespective of race, to exercise the rights of suffrage intelligently . . . upon political principles [and not] be actuated by partisan prejudice."

One observer noted that Moore's greatest work was "the cementing of the ties between the white and . . . colored [races]." Moore himself noted that he had made it a rule of his life never to permit himself to do anything offensive to any person. After his death, the mayor of Elizabeth City attributed to him the absence of racial strife in the city. Another observer wrote that Moore "rose from slavery to a position as educator and statesman, and dedicated his life to the service of both races." To the many people who knew him, it was said, he would always be remembered by his admonition to "be somebody."

In 1889 Moore married Symera T. Raynor of Windsor, and they became the parents of two daughters: Ruth Lawrence and Bessie V. He was buried in Oak Grove Cemetery, Elizabeth City.

Evelyn A. Johnson, History of Elizabeth City State University: A Story of Survival (1978).