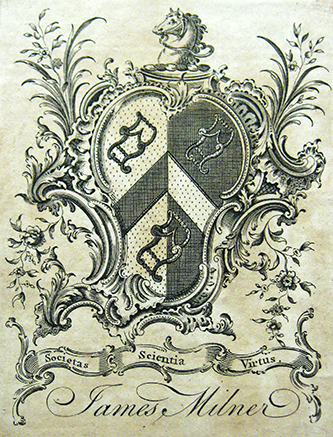 James Milner, attorney, was a native of Scotland. After residing for some years in Sussex County, Va., he moved to North Carolina about 1766. Milner settled in the town of Halifax, where he began to practice law. In 1769 he purchased a lot in Halifax and in the short time before his death, he amassed considerable property in and surrounding the town. He appears to have lived on a plantation just south of Halifax, known as Green Hill. On his arrival in Halifax, Milner became a member of the Royal White Hart Lodge. Gaining the confidence of Joseph Montfort, who had been made provincial grand master for North Carolina in 1768, he was appointed deputy grand master in 1770.

According to the Colonial Records, he had some claim against Herman Husband, the Regulator leader, and won a suit against him in the court of Orange County. As a result of the suit, Milner gained title to a two-hundred-acre farm Husband owned in Guilford County. The question arises whether Husband incurred this debt by having Milner act for him in some capacity.

Milner became well known during his residence in Virginia, as much of the information about him is derived from notices that appeared in the Williamsburg paper, the Virginia Gazette. According to this source, in the fall of 1772 he was elected to the Assembly of North Carolina and a great ball was held in Halifax town to celebrate this event. Shortly afterwards, he was thrown from his horse and died of a fractured skull. After his death a rumor began to circulate that counterfeit currency had been found in his possession. Many friends sent in testimonials, printed in the Virginia Gazette, denying the rumor. Among these was a letter from the Reverend William Willie, Milner's former clergyman in Virginia, who stated that he had been present in Halifax when the effects of the deceased were examined and no counterfeit money had been found. At the time Willie was the popular rector of Albemarle Parish in Sussex. (Willie Jones and Willie Mangum, both prominent North Carolinians from Sussex County families, were named for the parson.)

Obviously a man of ability, Milner did not live long enough to make his mark in North Carolina. However, as the majority of his friends, such as the Scottish merchants in Halifax, were Tories when the American Revolution broke out, it is likely that he would have cast his lot with them.

The inventory of Milner's estate is one of the most remarkable recorded in North Carolina in the colonial period. In addition to a library of 621 volumes and other personal property, the inventory lists scientific instruments such as a microscope, solar telescope, magnet, and prism glass. The library was of unusual breadth, covering books on music, literature, law, and medicine. A few volumes, containing Milner's elaborate book plate depicting his coat of arms, are in the North Carolina Collection of the University of North Carolina at Chapel Hill. By will, Milner left his old friend, the Reverend Mr. Willie, all his books in Greek and Hebrew. He was buried in the colonial cemetery in Halifax, his gravestone bearing the earliest date of any there.

Thomas C. Parramore, Launching the Craft: The First Half Century of Free Masonry in North Carolina (1975).