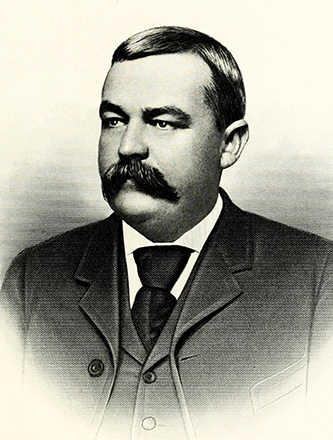 James Henry Millis, manufacturer, merchant, banker, and businessman, was born in Guilford County of English ancestry. His father was James Nicholson Millis, a successful businessman and farmer; his mother was Elizabeth Armfield Millis, a descendant of James Armfield, who arrived in Philadelphia in 1713, the first of the Armfields in America. James Henry spent his boyhood on the family farm, which is now the Sedgefield community between Greensboro and High Point. At seventeen he expressed a desire to embark on a business career, in which his parents encouraged him notwithstanding his young age.

Millis went first to Asheboro, where for three years he worked in the store of the distinguished North Carolinian, Dr. J. M. Worth, who later became state treasurer. On Worth's advice, he went to Greensboro to associate himself with Odell, Ragan and Company and after two years moved to High Point, where he spent the remainder of his life.

In 1876 he organized the mercantile firm of Ragan, Millis and Company, which for many years was the largest business of that kind in the High Point community. The firm opened a branch in Asheville and for several years was the South's largest shipper of dried fruit.

In 1892 Millis became interested in manufacturing, organizing the Home Furniture Company, of which he was secretary-treasurer. He also established the High Point Overall Company and the Highland Cotton Mills and was a stockholder in various other firms that made his city a manufacturing and marketing center. For a period he was secretary-treasurer of Snow Lumber Company, then the South's largest supplier of woodwork.

Millis was not one to confine his talents to his personal interests alone. He also promoted and was an official in one of the first local building and loan associations in North Carolina. The success of later building and loan institutions in his home town was due in large measure to the confidence and experience he infused into the first one.

In 1876 he married Cornelia A. Walker, who died nine years later. After her death, he plunged into business and political activities even more vigorously. For ten years he served as chairman of the Guilford County Board of Commissioners, a post later held by two of his sons: James Edward, a business and manufacturing leader, and Henry Albion. One daughter died young, while the other married W. J. Armfield, Jr., a pioneer banker at Asheboro, whose sons were active in the development of Burlington Industries.

Millis was fifty when he became a prime mover in organizing the High Point Hosiery Mills, a complex of plants that grew into the Adams-Millis Corporation, later the largest manufacturer of hosiery in the world. He was president of that company until his death.

One of the builders of High Point, with significant impact on Guilford County and the state of North Carolina, Millis was more instrumental in helping young men get a start in business than any of his peers in High Point. He died at age sixty-four and was interred in the Millis mausoleum at Oakwood Cemetery, High Point.