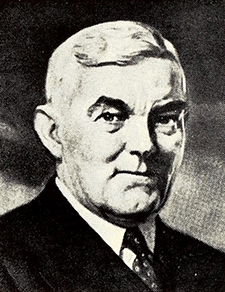 James Edward Millis, industrialist and civic leader, was born in Guilford County, the son of pioneer industrialist James Henry Millis and his wife, Cornelia Walker. He attended Jule Weatherly's private school in High Point and the Bingham Military Academy in Asheville. In 1920 he entered The University of North Carolina, where he remained for two years, part of the time as a special student concentrating on banking, finance, and accounting.

In 1905 Millis joined his father's company, the High Point Hosiery Mill, as a bookkeeper. In 1927 he was instrumental in the creation of the Adams-Millis Corporation, which merged the textile interests of the Adams and Millis companies, including Piedmont Mills Company, Kernersville Knitting Company, High Point Hosiery Mills, and Pointer Hosiery Company. Millis became secretary-treasurer in 1928 and president in 1935. In 1941 he also became chairman of the board of directors, a position he held until his death. He resigned as president of Adams-Millis in 1952 and was succeeded by his son, James Henry.

Under the elder Millis's direction the company continued to grow and diversify, becoming one of the largest hosiery manufacturers in the world. Millis was known not only for his successful attempts to expand the technological skill necessary to produce modern textiles, but also for his concern for the safety and welfare of his employees.

Millis also served as president of the Thomasville and Denton Railroad and director of the Wachovia Bank and Trust Company. During World War II he was a member of the War Labor Board. He served two terms on the High Point City Council as well as two terms as a Guilford County commissioner. He helped to establish the WUNC-TV network and served as a member of the board of trustees of The University of North Carolina. He was active in the improvement of both High Point and Brevard colleges and was awarded the honorary degree of doctor of textile science by North Carolina State College in 1946. For many years he taught Sunday school at Wesley Memorial Methodist Church and worked with the local Boy's Club and the community chest. He was a Thirty-second-degree Mason, a member of the Elk's Lodge and the Rotary Club, and an avid quail hunter.

Millis married Helen Brooks in 1911, and they became the parents of four children, two of whom, Mrs. J. Harris (Helen) Covington and James H., survived him. He was buried in Oakwood Cemetery, High Point.