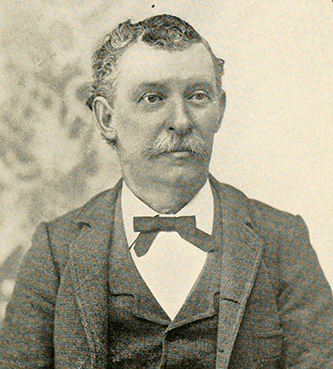 Wyatt Jackson Armfield, banker and businessman, was born near High Point on the Armfield family plantation, the son of Richard Beeson Armfield and Annie Chipman Armfield. The family was originally from England and of Quaker stock.

Armfield grew up on his father's farm and enrolled at Oak Ridge Institute just before the Civil War. When the war forced the school to close, he went into the quartermaster corps of the Confederate army and worked in the Jamestown Woolen Mill, which had contracted to supply the gray uniforms for Confederate soldiers. The mill was burned by Stoneman's Raiders in the closing days of the war.

No sooner had smoke cleared from the battlefields than Armfield set out for the West and obtained employment in sales with a nursery at Knightstown, Ind. He built a sales organization for the firm and traveled extensively throughout the eastern half of the nation, selling fruit trees and shrubbery. By the 1880s he returned to North Carolina.

On 20 Dec. 1866, Armfield married Jennie Britt, daughter of J. O. Britt, a large landowner and peanut grower of Britt's Landing in Perry County, Tenn. She died in 1918, after many years of presiding over the stately mansion, Brittania, at High Point, where Armfield had built an extensive banking empire reaching through most of central Carolina. 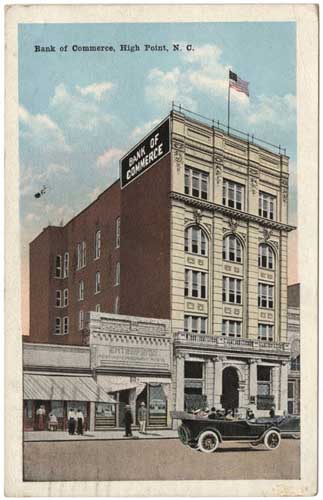 Armfield was instrumental in the establishment of the first national bank in Greensboro, known at the time as the National Bank of Greensboro. With associates, he set up the National Bank of High Point in 1886 and, when the cashier returned to his Wilmington home, installed as cashier his son, Eugene, who had just been graduated from The University of North Carolina. Others of his sons, W. J., Jr., Frank, and Jesse, were placed in various of the branch banks Armfield set up in Asheboro, Thomasville, Madison, Graham, Troy, Mocksville, and other places in the state.

Rechartered after twenty years, the bank in High Point was liquidated in 1908, paying all depositors in full and providing stockholders 111 percent on their investment. Armfield retired from active banking and enjoyed gathering his children and grandchildren about him at his home, one of the finest in High Point. On Deep River near High Point, his descendants continue to hold land that has been in the family since 1795.

Armfield saw High Point grow from a water tank village to an industrial and furniture-marketing center. As one of the state's pioneer bankers, he knew both depressions and booms and bore an equal contempt for each.

During his lifetime, Armfield took an avid interest in numerous civic and educational enterprises, including founding of the High Point Public Library.

Armfield's children, in addition to those mentioned as banking and business associates, included Mrs. Rupert T. Pickens of High Point and Mrs. Frank Armfield of Concord.

Upon Armfield's death, his body was placed in the family mausoleum at Oakwood Cemetery in High Point.

Thank you for visiting NCpedia and the Wyatt Armfield entry and sharing your story with us.  It is always gratifying at NCpedia when readers and researchers make personal connections with their work and share that with us.  Unfortunately, we do not have any additional information in the NCpedia on Ms. Hunter and her connection to Wyatt Armfield to help you. I am also sending a reply to the email address you provided with some suggestions that might help you find this important information.

I am now 83 years old and 30 or so years ago, I was aquainted with Ms, Adelaide Armfield Hunter. While traveling, I stopped and visited with her and we corresponded by letter for a few years, I was doing research on the Armfields at the time. She and I had several sessions on the Armfields, and I must say, she was a very proud armfield. My question is this, she did not answer my last letter which was in the late 1980's, I presume she passed away at that time. Can you tell me when Adelaide Armfield Hunter did pass on as I would like to close a chapter in my own book of life. Thanks for any help you can give, Bill Armfield