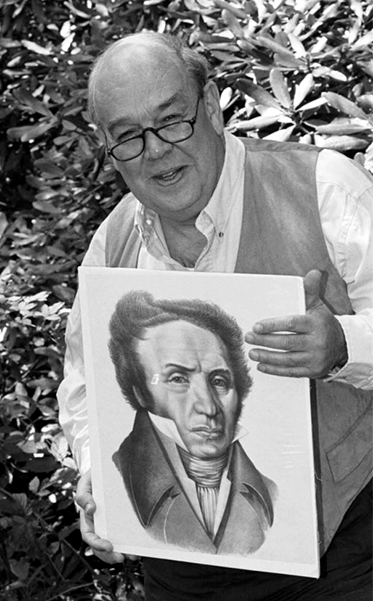 André Michaux, French botanist, explorer, and writer, was born at Satory, near Versailles. From an early age he was trained in the agricultural sciences in order to follow in his father's footsteps in managing farmland on the royal estate. In 1769 he married Cecile Claye, who died eleven months later, just after the birth of their son, François André. For the next decade, Michaux devoted himself to an even more intensive study of botany and horticulture. He began his plant-collecting travels in 1779 with trips to England, the Auvergne Mountains, and the Pyrenees. In 1782 he was appointed secretary to the French consul in Persia, but once there, he gave up his post and spent two years studying the plant life of the Tigris and Euphrates valley. Soon after returning to France in 1785, he was commissioned by the French government to study the trees in North America, to send back specimens for the royal gardens, and to ascertain their value for naval construction.

Accompanied by his fifteen-year-old son, Michaux arrived in New York in October 1785. He set up a nursery at Bergen, N.J., where he deposited a wide variety of trees, shrubs, and wildflowers that he had gathered on trips through New Jersey, Pennsylvania, and Maryland. Many of these specimens were shipped back to France and replanted in the gardens of Rambouillet and Versailles. Michaux also included a number of live game birds with these shipments. On a trip to South Carolina he found Charleston a more suitable climate for his botanical collection, and in 1787 he made it his headquarters. He bought a plantation ten miles from the city that served as his nursery and shipping center for the rest of his American stay.

Later the same year Michaux discovered the botanical bounty of the Southern Appalachians and made the first of at least five visits to western North Carolina. Following the route taken by William Bartram, a Philadelphia naturalist who had explored the area in 1775, he entered the state through Georgia and studied the flora along the French Broad River. He returned in 1788, this time entering North Carolina through Charlotte and following the Catawba River up into Burke County before proceeding across the Blue Ridge Mountains.

Michaux also made scientific expeditions to Florida (1788), the Bahamas (1789), and the Hudson Bay (1792). In 1793 the French consul to the United States, Edmund Charles Genet, sent Michaux to Kentucky and Tennessee on a diplomatic mission regarding the transfer of French and Spanish lands in the West, but again his role as a botanist overshadowed his efforts as a negotiator. His last trips to the North Carolina mountains were made in 1794 and 1795. These tours included visits to Roan Mountain, Mount Mitchell (then known as Black Mountain), Grandfather Mountain, Table Rock, Hawksbill, and the Linville Gorge. He noted in his journal that on the summit of Grandfather (which he mistakenly called "the highest mountain of all North America"), he and his guide sang the new French hymn "La Marseillaise" and cried: "Long live America and the French Republic! Long live Liberty!" During his travels in this area, Michaux came to know and was often a house-guest of such prominent residents as William Wiseman of the Toe River valley, and Joseph McDowell and Waightstill Avery, both of Burke Courthouse (Morganton). 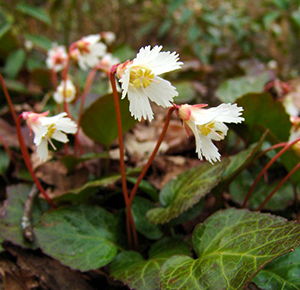 Some of Michaux's most significant botanical discoveries were made in western North Carolina. In the Toxaway area he found one of the rarest wildflowers in North America, the Shortia galacifolia. Despite subsequent searches by various botanists, this plant was not seen again until Dr. Asa Gray rediscovered it in 1877. Michaux also identified a rare species of yellow locust and found that the inner bark of its roots yielded a valuable dye, which later came into common use by mountain residents. Probably his most important contribution to western North Carolinians was in making them aware of the commercial value of ginseng, a plant valued by the Chinese for its medicinal qualities. He taught them how to collect it and sell its roots for the Chinese market. The sale of "sang" proved to be a profitable venture for many mountain families, and it continued to be a major cash crop in some areas until recent years. In addition to the valuable information he recorded in his journals, Michaux wrote two books based on his American findings: The History of North American Oaks, published in 1801, and Flora Boreali Americana, published in 1803 after his death.

The French Revolution deprived Michaux of the financial support the royal government had provided him. By 1796 his resources were exhausted and he was forced to return home to Paris. He sailed from Charleston in August with a vast supply of botanical specimens but was shipwrecked just off the coast of Holland. Though he and most of his plants were saved, a good part of his journal describing his North American travels was lost. On returning to France, he found that most of the American trees he had shipped back during his decade abroad had been destroyed or scattered since the outbreak of revolution. When his efforts to interest his government in sponsoring another trip to the United States failed, he agreed to serve as the naturalist on an expedition to Australia led by Captain Nicholas Baudin, which set sail in October 1800. He abandoned the group on the Indian Ocean island of Mauritius, where he found the tropical vegetation of particular interest. After a six month stay, he moved on to nearby Madagascar to continue his studies. While there, he became ill as a result of overexertion and died of a fever several months later at age fifty-six.

Shepherd M. Dugger, The Balsam Groves of the Grandfather Mountain (1892).

Is the Indian ocean island

Is the Indian ocean island correctly Mauriritius, NOT Mauritania

You are correct. This article

You are correct. This article was written several decades ago in a published book. I will let NCpedia staff know about this and see if we cannot somehow get a correction. Thank you!