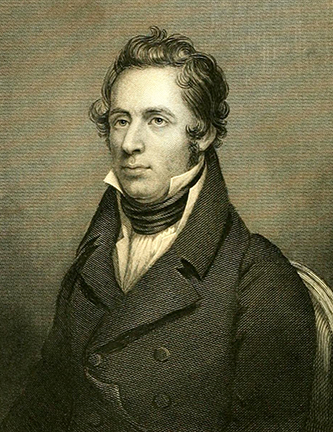 François André Michaux, French botanist, explorer, and writer, was the only child of André Michaux. His mother, Cecile Claye Michaux, died just after his birth at Satory, near Versailles. In 1785 he accompanied his father to America and two years later, at age seventeen, took charge of the nursery his father established on a plantation near Charleston. He spent most of his time overseeing its operation, though he traveled with his father on several of his expeditions. In 1790 he returned to France, where he studied medicine for several years. Arriving just as the French Revolution broke out, he also became involved in the republican cause.

In 1801 the younger Michaux was commissioned to return to the United States to continue his father's work in studying and reporting on American plant life. He sailed to Charleston, where he spent the winter of 1801–2 disposing of his father's property and shipping his remaining specimens to France. In June 1802 he left from Philadelphia for a three-and-a-half-month trip through Ohio, Kentucky, and Tennessee that ended in Charleston, where he again spent the winter before returning to France early in 1803. His account of this journey, which focused as much on agricultural developments as on botanical discoveries, was published in Paris in 1804. It was translated into English the next year under the title, Travels to the West of the Allegheny Mountains. Though he spent little time in North Carolina, he provided good descriptions of Morganton and Lincolnton, which he passed through on his way back to Charleston.

In 1806 Michaux again set sail for America but was captured by the British and detained for several months in Bermuda. Arriving in New York in May, he spent the next three years studying and classifying trees in the northeastern United States, Quebec, and Nova Scotia. In 1807 he met Robert Fulton and became such a good friend that he was one of two passengers on the Clermont 's landmark trip up the Hudson River. After returning to France, he wrote a three-volume work called The North American Sylva; or, A Description of the Forest Trees of the United States, Canada, and Nova Scotia. It was published in Paris from 1810 to 1813 and translated into English five years later. Michaux spent most of the rest of his life managing experimental farms owned by the Société Centrale de l'Agriculture near Paris, devoting much of his work to the cultivation and propagation of trees and shrubs grown from seeds he had sent back from America.

Michaux contributed significantly to his father's legacy. He edited and published André's History of North American Oaks in 1801. He preserved those journals of his father's American travels that survived his shipwreck off the Dutch coast and presented them to the American Philosophical Society at Philadelphia in 1824, though they were not published until 1889 in the society's Proceedings.

Michaux married his housekeeper late in life; they had no children. He died suddenly of apoplexy in Vauréal, France. Much of his fortune was left to the American Philosophical Society and the Society of Agriculture and Arts in Boston; he had been an active member of both organizations.

Hall, H. B., engraver, after a painting by Rembrant Peale."F. Andrew Michaux." The North American sylva; or, A description of the forest trees of the United States, Canada, and Nova Scotia. Philadelphia: Rice Rutter & Co. 1865. Frontispiece. https://archive.org/stream/northamericansyl01mich#page/n9/mode/2up (accessed July 9, 2013).