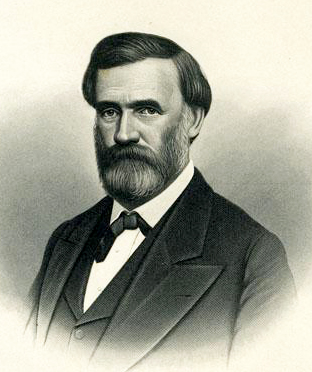 Giles Mebane, lawyer, farmer, and legislator, was born in Orange (now Alamance) County, near the present town of Mebane, which was named for his family. He was the son of James Mebane, and the grandson of Alexander Mebane, a veteran of the American Revolution. Both of these men served numerous terms in the state legislature, and the latter was a member of the U.S. Congress for a term.

Young Giles attended the Bingham School in his native county and was graduated from The University of North Carolina in 1831. He remained in Chapel Hill for several years as a tutor before beginning the practice of law. Mebane then followed in the footsteps of his forebears by embarking on a political career. From 1844 to 1849 he represented Orange County in the House of Commons. On 1 Jan. 1849 he introduced a bill to create a new county from a section of Orange. The bill passed, and he named the new political unit Alamance; at his wife's suggestion, its county seat was called Graham in honor of Governor William A. Graham. The new county paid tribute to its virtual founder by electing him to the legislature from 1854 to 1860 and to the state senate from 1861 to 1865; in the senate he served for a time as speaker. Among his friends and associates in public office were William A. Graham, Thomas Ruffin, and George E. Badger.

While a legislator, Mebane was a staunch supporter of the bill to create the North Carolina Railroad. Successful in this endeavor, he contracted to build a section of the road and served for eighteen years on its board of directors, which recognized his interest by naming one of its engines the "Giles Mebane."

A staunch Whig as long as that party existed, Mebane was one of a group that entertained Henry Clay in 1844 on his historic visit to Raleigh. At the same time, the young lawyer's diplomacy and affability enabled him, on occasion, to work in harmony with the Democrats. This accounted to some extent for his accomplishments as a legislator and for his election to the Secession Convention (1861), constitutional conventions of 1861 and 1865, and Council of State (1866).

In 1855 Mebane was named a commissioner of the Alamance and Caswell Plank Road Company, and in 1861 he was an incorporator of the Caswell Railroad Company. After the Civil War, he moved to a plantation in Caswell County and in 1868 was elected vice-president of the newly organized Country Line Agricultural Society of Caswell County. In 1877 he was an incorporator of the Milton and Sutherlin Narrow-Gauge Railroad, and in 1879 he was one of the founders of the Farmer's Bank of Milton. In the latter year Mebane was elected to the state senate from the district composed of Caswell and Orange counties. During this term, he served on the important Committee of State Debt, where "he took a very decided part devising and maturing plans to compromise and settle the State debt." In 1885 he aided in the futile attempt to revive the Caswell Railroad Company. He also served for many years as chairman of the county courts.

In his old age, Mebane moved to Graham. He was a Presbyterian, and his funeral was conducted in the local church of that denomination. He was buried in Linwood Cemetery, Graham.