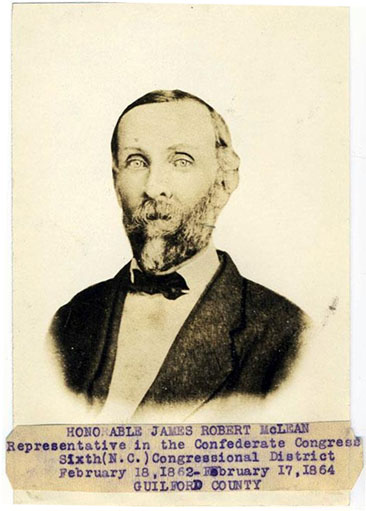 James Robert McLean, lawyer and Confederate congressman, was born in Enfield of Scottish descent, the son of Levi H. McLean, an educator who was a native of Guilford County, and his wife, Rebecca Hilliard Judge. Though James was orphaned early, his relatives provided him with a good education at the Bingham School in Mebane and the Caldwell Institute in Greensboro. He then read law under John A. Gilmer and was licensed in 1844 to practice in the county courts and in 1846 in the superior court.

For a brief time McLean practiced in and around Greensboro before moving to Rockford, then the county seat of Surry. During the session of 1850–51 he represented Surry as a Democrat in the House of Commons. He served on the Committee on Propositions and Grievances but took little part in the house deliberations. He soon returned to Greensboro and entered a law partnership with Cyrus P. Mendenhall and W. S. Hill. By 1860 he had an established legal practice; he also owned a small plantation and was the enslaver of twenty-five people.

McLean was an early and active Secessionist, and as the Confederacy was popular in North Carolina during 1861, he won a seat in the Confederate House of Representatives over two men who had become Secessionists only after Abraham Lincoln's call for volunteers to quell the Southern rebellion. During his two years in Congress McLean served on the committees of Claims and Foreign Affairs, but he generally let others initiate legislation. For the most part he approved any reasonable delegation of war-making powers to the Davis administration and differed with it significantly only on financial matters. McLean preferred to curb inflation by heavier taxes rather than by repudiating part of the paper currency already in circulation. He also believed that the government should pay market prices for army supplies rather than impress them at a lower and therefore unfair price. In August 1863 he was forced to announce that poor health would prevent his seeking reelection.

In November 1864 McLean was elected major of the Alamance County Senior Reserve, the Seventy-seventh North Carolina Regiment, which had been formed in July. In December President Jefferson Davis nominated him to be commandant of a camp of instruction for the training of new recruits, but the senate rejected the nomination. On 7 December the Seventy-seventh left for Savannah and on the ninth took part in the engagement at Coosawhatchie, S.C. It then fought around Savannah until that city fell to General William T. Sherman's army, then retreated northwards. After the Battle of Bentonville it retreated to Smithfield, then to Raleigh, where it finally surrendered.

The war emancipated enslaved laborers and this left McLean almost penniless. He spent the next few years trying to recoup his fortune. He had just about recovered financially when he died in Greensboro. He was buried in the old First Presbyterian Church Cemetery.